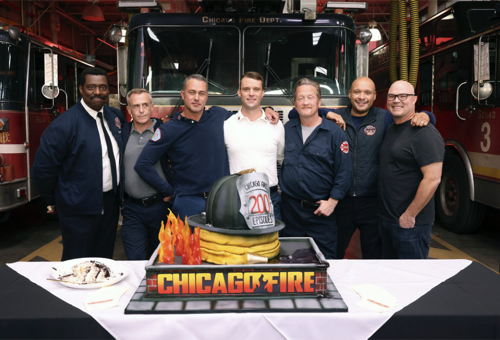 Tonight’s Chicago Fire season 10 episode 4 looks like it is going to be great and you won’t want to miss it.   While you’re waiting for our recap make sure to check out all our Chicago Fire recaps, news, spoilers & more, right here!

In tonight’s Chicago Fire episode Casey finally spoke with Brett. He told her that in Griffin and Ben’s best interests, it would be better for him to move to Oregon and he wanted her to come with him. Casey and Brett just started something. They’ve been in love with each other for a while now and they both took the risk by owning up those feelings. It was thankfully reciprocated at both ends. They decided to pursue their relationship.

They even got over the Gabby thing. But Brett couldn’t say yes. She needed time to think about it because her life is in Chicago. She was starting a new program called paramedicine and she wanted to be there to get it off the ground. Brett would have told anyone else who asked her to move at this time “no”. And the only reason she didn’t do so immediately with Casey is because its Casey.

The great love of her life. Brett had needed time to think and there were other options to consider. Casey offered to go long-distance if she couldn’t move. Brett was taking everything in as Casey said his goodbyes to the rest of the team and he made his apologies to them. Casey hated leaving them. He said he wouldn’t leave if he didn’t have to and they understood. Gallo lost his family.

It was the Fire Chief who looked out for him and so he told Casey that boys will be lucky to have him. The firehouse received an emergency call. There had been a car accident a woman trapped in her car with the wheel of the car spinning in right in her face. It could have killed her. They had to carefully remove her from the vehicle and they were able to save her life because they took her out of the window.

Gallo and his friends were later contacted by the owner of the brewery they were using. The representative had apparently asked them to say a few kind words about her employer to a magazine and she wanted them to work an event. Gallo, Ritter and Violet agreed to do it. Gallo started to flirt with the young woman. She flirted back. It took Violet a good minute before she noticed but then she did and she didn’t like it.

Meanwhile Brett and Mooch started the paramedicine rides. They visited people at their homes. They treated them. They also saved a life because they found one woman unresponsive lying on her floor. Brett still hadn’t made a decisions about moving or not and so finding that woman and saving her life showed her that she’s very much still needed in Chicago.

Brett understands why Casey has to go. She spoke to Hermann about it and Hermann tried to offer advice, but he was in no position to do so because he ended up in a situation he didn’t know how to walk back. Hermann agreed to host a bigwig in the Chicago Fire Department’s party. The party was for the man’s son Brennan. It was Brennan’s birthday. Brennan came by and he told Hermann to double his kegs because he was going to invite a lot of people.

But Brennan didn’t look twenty-one or like he was about to turn twenty-one. He looked like he was in high school. Hermann tried to ask him gauge his real age and Brennan wouldn’t tell him and that’s a problem. Hermann couldn’t sell alcohol to someone under the legal age limit. He would risk losing his liquor license. It might even cost him his bar. And so Hermann was screwed.

He had to get out of this party without upsetting anyone. Hermann was afraid of repercussions but he didn’t need to worry about Station 51 because 51 was the new center of the fire department in the country and so he was more worried about himself. The bigwig was in charge of disciplinary action.

Hermann did so not that long ago he was afraid would come back to him and so he didn’t know how to get out of selling liquor to underage kids and he knew what would happen if he did. If he did give them alcohol, those dumb kids would be posting it all over social media. They would completely ignore the fact that it was illegal and take photos and brag about the party and how they were all invited. It would get back to the powers that be and Hermann’s bar would find itself out in the cold.

So, Hermann told Mooch. The two of them had to come up with a plan of getting out of it and in the meantime they responded to several fires. There was the actual fire that happened at the church. It destroyed the church. It left the congregation devastated. Then there was the other fire. The one that wasn’t a real fire at all. Cruz became a father. The whole crew went to the hospital to see the baby and they all learned that his new son’s name is Brian and that they would be calling him Otis. For Cruz’s best friend. The team went to Hermann’s bar afterwards for celebratory drinks and they didn’t have to contend with the dumb party for underage kids. Mooch called his wife Sergeant Platt and she managed to scare off Brennan’s father before the party could happen. And so that cleared up one thing.

Brett cleared up the other. She told Casey she couldn’t move to Oregon and he understood. They were going to try dating long-distance. It was only supposed to last until the eldest kid Casey he’s taking on turns eighteen. The whole station gave Casey one last goodbye before he left. They also got to see Gallo’s magazine cover because his work event turned into a photo-shoot with his friends. And Gallo failed to notice how Violet had been cut out of the photo. Almost as if someone was jealous of her closeness to Gallo.