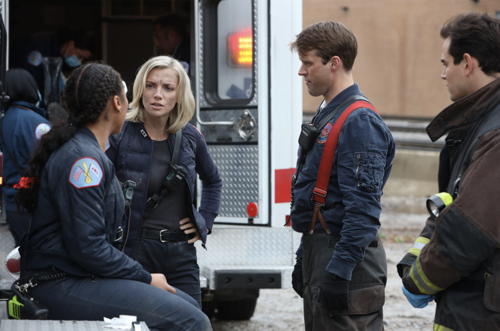 Tonight on NBC Chicago Fire returns with an all-new Wednesday, January 13, 2021, season 9 episode 3 called, “Smash Therapy,” and we have your Chicago Fire recap below. On tonight’s Chicago Fire season 9 episode 2 as per the NBC synopsis, “A mishap on the aerial ladder in the midst of a fire rescue leaves Mouch shaken and questioning his abilities. Kidd looks for support from Severide while Casey and Brett discuss their future.”

Tonight’s Chicago Fire season 9 episode 3 looks like it is going to be great and you won’t want to miss it.   While you’re waiting for our recap make sure to check out all our Chicago Fire recaps, news, spoilers & more, right here!

The meeting is today for Leutenant candidates and Kidd tells Severide that she won’t lie, she is nervous. Reality is hitting her, she asks him if he can help her study after their shift.

Casey asks Brett if they can talk, he tells her that he is sorry about what went down the other night. He doesn’t regret it. The alarm goes off and interrupts their conversation.

There is a victim on the roof, a man comes stumbling out of the building and says his boss is still in there. Mouch gets the ladder to the top of the building to save the people on the roof; there are two of them. There is a problem with the ladder, it swerves and Casey is on top, he almost falls off. Brett sees Casey and looks worried, but he is ok. Inside, they are still trying to save a trapped man in the fire.

Casey continues to go up the ladder to save the people on the roof. Mouch locks the ladder, some people are starting to come down. Severide saves the man inside, he went back in to save his car and Severide looks surprised. Casey asks Mouch to explain what happened with the ladder, he says he doesn’t know. Casey has a cut on his cheek, Brett takes care of him.

Back at the station, Kidd tells Casey she has her meeting. Kidd is in the meeting, it starts with an intro that is pretty strict. Conway hears Kidd speaking to another attendee and he tells her to break up the party. She thanks him for the opportunity.

Mouch is checking the ladder, he tells Herrmann that Casey is upset at him and he knows he didn’t bump the lever, it was locked in. Mouch is upset that he cannot find a mechanical problem. Mouch says what happened today can never happen again.

Chief Wallace is sitting with Casey, Herrmann and Severide and he reads the report about the ladder and it says it was caused by high winds. Chief Wallace suspects something is up, but he tells Casey it is his neck on the line, it is his call.

The man who Severide saved, Kelly, drops by the station to see him and thanks him. He says the car belonged to his dad and he was finishing it for him. He says he went back, but the doors were boarded up. Severide says they will be until they find the cause of the fire, then OFI will open them.

Mouch is reading the operations manual for 81, Cruz tries to help and Herrmann tells him not to, he is already beating himself up.

Severide drops by OFI and Conway says he met his girlfriend, she is young to be there. Severide says he should think about retirement, he is sounding creaky. Conway says people are saying that Kidd is there because she is sleeping with him, and don’t shoot him, he is just the messenger.

Herrmann stops by 24 to ask about an accident they had a while back with their arial, because they had a problem recently. He doesn’t get the information he was looking for.

Kidd tells Severide she heard he was at OFI as well. She reminds him that he is supposed to help her, he says he has a thing to do after shift. Severide gets someone else to walk her through it.

Brett goes to see Casey and tells him that she doesn’t want things to be weird between them. He says he doesn’t either, but he has real feelings for her regardless of Gabby. She says there is no regardless of Gabby, what happened can never happen again; he has been such a good friend to her and she just needs a little space right now.

The alarm goes off, a young girl has blood all over her face, a drone flew into her face; a piece of her nose was cut right off. Mackey is with her and she sees the drone, she grabs a stick that is close by for fear that it was going to fly again and hurt one of them. Mackey turns to the victim and gives her the stick, she tells her to use smash therapy on the drone, and she does.

Severide is with Kelly in the burned out building, he asks him how he thought he was going to get out of there with a car. The car is covered, and in good shape. It is a 70’s Stingray and only appears to have a burned out tire. Severide says he can take his time looking around, meanwhile he is going to take some notes.

Herrmann is still trying to find out more information about the arial, if there were any technical difficulties.

Kylie got Chief Wallace an add on, standing desk, for his desk, so he can stand using his computer instead of sitting down because he mentioned his back was sore, and it is driving him crazy.

Casey asks Severide if has time for a cigar and to chat. Casey tells him what happened with Brett, that Gabby is always going to be an issue. He tells Severide that Brett wants to let it go and maybe it is for the best. Severide says it sounds like he has it pretty bad for Brett.

Chief Wallace calls Kylie to his office, he is sitting down and she figures out that he doesn’t like the standing desk. She tells him just to tell her the truth, treat her like everyone else. He says he didn’t want to damper her enthusiasm.

Herrmann calls Mouch to Casey’s office, he called the company who the truck was purchased from. There were intermittent problems with the arial, the repairs were never made. It wasn’t operator error. Casey apologizes to Mouch for giving him a hard time, Mouch says it is fine, he is relieved. Herrmann tells Mouch he knew he didn’t screw up and it had to be something else.

Brett is at the bar with Kidd who asks her about the kiss, Brett says it was good but she has to put it behind her and move on. There are men out there who are not deeply in love with their exes. Kidd says Severide has been acting weird, he dodged her two nights and said he had a thing. Casey walks into the bar and orders a whiskey, looks over at Brett.