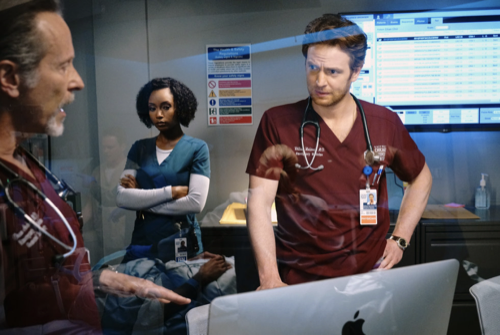 Tonight on NBC their medical drama Chicago Med airs with an all-new Wednesday, May 26, 2021, episode, and we have your Chicago Med recap below. In tonight’s Chicago Med season 6 episode 16 called, “I Will Come to Save You,” as per the NBC synopsis, “Carol receives a second chance at life when a new heart becomes available; Choi and Archer find themselves in hot water with an old patient; Halstead faces the consequences of the stolen trial medication.”

In tonight’s Chicago Med episode, there was hope for Carol. Carol is Dr. Manning’s mother and she was in heart failure. She was taking experimental drugs that brought out a preexisting condition. It was also being given to her illegally and so that had to stop, but now a heart has become available to her. The heart was denied by other patients’ doctors. It had a benign tumor in it and so Crockett will have to remove the tumor before it’s implanted in Carol.

There was also another issue. This second issue is that the heart is coming from Los Angeles and it would be deemed unviable for such a long transit from there to Chicago. The only way to keep it viable is this new technique. The technique is again new and so there was a chance of it not working out. And Carol as well as her family have to take a risk on the new heart.

Manning was willing to take that risk. She wanted to keep her mother alive as long as possible and that’s why she broke the law by giving illegal medication to her mother. However, Manning’s ex-fiancé covered for her. Dr. Halstead claimed it was all him. He said he was the one who gave Carol the illegal medication and that he broke hospital protocol to do it. Halstead fell on his sword because it was Manning.

They’ve been through a lot together. He also still has a soft spot for her and that’s why he risked his career and his new relationship with Dr. Virani to get Carol the medication. The medication had bought her time. Halstead gave her that time and now it’s cost him everything. Halstead was in trouble.

Halstead was waiting to hear from the bigwigs about what will happen to him as Dr. Charles was taking on an unusual case. Dr. Charles was treating a man who came in after having a mental relapse after he saw a rat in his apartment and Charles couldn’t reach this man because he didn’t know Russian. Charles called for his friend as well as his fellow psychiatrist Dr. Lankov.

Lankov was able to translate Mr. Zorin’s file from Russia. It stated that Zorin had sluggish schizophrenia. It was a term that Lankov had heard as a young resident back in the old country and it was something new for Charles. Charles had never heard that term before. He asked Lankov to stay on as a translator and Lankov gave him five minutes. Both men went into Zorin’s room. They identified themselves and asked Zorin how he was. And Zorin had needed to be sedated after talking to Lankov.

Lankov had addressed him in Russian. It set off Zorin and it also seemed to upset Lankov. Whatever Zorin said, it drove Lankov into the bathroom where he was violently sick. Lankov later claimed it was a hernia that acted up sometimes and Charles didn’t really believe him. Lankov also said the word that Zorin kept shouting was slang for psych hospital. Zorin was in a psychiatric facility back in Russia and Lankov said that’s where he developed his phobia of rats.

Rats in a hospital. Charles was confused by that and he had questions but he was called down to the ED. There had been an incident. A past patient returned with a gun and he shot Dr. Choi. Choi had been in the middle of firing Dr. Archer when Archer’s patient returned and tried to shoot him. Choi got in the middle. He was shot and the former patient was subdued.

The patient was Mr. Dietrich. He was the man who believed he was living in a simulation and that he bought a red pill off the internet that could make him wake up in the real world. Dietrich came in because he had a burst appendix. The appendix was removed without his consent. He woke up and he believed the doctors had pumped his stomach free of the red pill. He now believes he’s stuck in the simulation because Archer performed surgery on him without his consent. This was Archer’s actions coming back to bite him.

It was just unfortunate that affected Choi instead. Choi had been in the middle of firing Archer when the incident happened and Archer immediately put himself on Choi’s case. He did this because no one else at the hospital knew he was about to be fired. Choi had been firing him outside of the hospital as a way to save Archer’s pride and now he couldn’t talk.

Choi had a tube down his throat to help him breathe. He couldn’t speak and Archer went around acting like he knew what was best for Choi. He pushed for surgery. He got it and then he pushed a more invasive surgery than was called for. At each step, Archer kept pushing for more. He kept risking Choi’s life and even the man’s ability to walk one day. The others tried to speak up. April spoke up and Halstead.

Halstead didn’t care about anything else. He was no longer concerned about his own career because his first concern was saving Choi who he once mentored and surprisingly it was Archer who claimed Halstead had another agenda. He claimed Halstead wanted to risk Choi’s life in petty revenge for not getting the job that was given to Choi. That happened months ago. And Halstead wasn’t that kind of doctor.

Halstead wouldn’t risk a patient’s life because of their personal agenda. Archer however had been proven to do this because Dietrich wasn’t the first patient to deny treatment and that’s why he was being fired in the first place. Halstead later heard from Goodwin. He had been fired as a doctor from the hospital for what he did with the clinical trial. Archer on the other hand had turned out to be right. He pushed and pushed and somehow he had been right about Choi.

Choi’s life was saved. He woke up in the hospital with April by his bedside. She told him she still loved him and it was clear Choi still loved her. Choi was going to need physical therapy. While he was out of commission, it was Archer who was going to act interim Chief of the ED. Goodwin appointed him to the position moments after she fired Halstead.

The man who shot Choi was arrested. He will most likely spend the rest of his life in a psych hospital and so it was hard for Charles to hear Lankov say he was like Dietrich. Dietrich lived in an alternate universe. Lankov explained to Charles that that’s how he felt living in the Soviet Union because he was a psychiatrist there and he didn’t really treat the sick. He treated dissidents.

Like Zorin. Zorin had freaked out because he was told he was in a psychiatric hospital and the one he was in back in Russia had been basically a prison cell. His diagnosis of sluggish schizophrenia was what they called dissidents. They had to be crazy because the Soviet Union was so perfect that anyone who didn’t see that way was deemed crazy. Lankov had once believed this as well. He was a part of the problem.

Lankov confessed everything to Charles. He told him about the things he did to the other people because psychiatry had been weaponized back then in Russia and Charles helped to see that he could do better now. Lankov tried again with Zorin. He was able to reach him now and he can treat him now.

Later, April heard back from admissions for the Nurse Practitioner program. She got in and soon her whole life will change.

Manning heard about Halstead and she told him that she wanted to come clean because he didn’t deserve to be fired, but he told her that it was okay. He was going to be okay. He was willing to take the fall in order to protect her and nothing she said could have convinced him differently. And so Manning came clean on her own.

She went to Goodwin and she told Goodwin the truth.