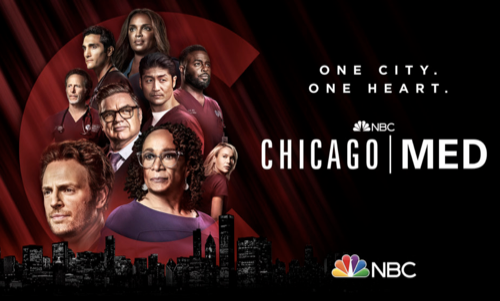 Tonight on NBC their medical drama Chicago Med airs with an all-new Wednesday, September 22, 2021, episode, and we have your Chicago Med recap below. In tonight’s Chicago Med season 7 episode 1 called, “You Can’t Always Trust What You See,” as per the NBC synopsis, “Halstead returns to Med to help Goodwin with a secret investigation; Archer and Charles deal with twins who insist on being identical inside and out; Stevie and Dylan treat a young patient with sickle cell anemia.”

Chicago Med Season 7 begins tonight with Dr. Will Halstead (Nick Gehlfuss) packing up the house for Dr. Natalie Manning (Torrey Devitto). They both assure each other they will be okay as she encourages him to go back to work, he says he will as they hug. Meanwhile, Dr. Daniel Charles (Oliver Platt) arrives at the parking garage and is approached by Dr. Dean Archer (Stever Weber) who admits that he always looks at the spot where Dr. Ethan Choi (Brian Tee) was shot at. Apparently, his physical therapy is going well and he is pleased he is not holding a grudge. Charles wonders about the whole scenario and how it would have played out differently since the patient was aiming at Dean.

In the ED, Dr. Sharon Goodwin (S. Epatha Merkersen) approaches Dr. Matt Cooper (Michael Rady), questioning his methods, but he excuses himself to deal with another patient. Sharon receives a call from Will. Maggie Lockwood (Marlyne Barrett) asks Dr. Crockett Marcel (Dominic Rains) to cope with a patient in another room. Dr. Dylan Scott (Guy Lockard) meets with his young patient who appears to have been bitten by a rattlesnake. When questioned further, he reveals he stepped into a box with a snake; but Dylan knows better, revealing he knows the gang colors on his shoes and the hand in the box was to see if shawty had what it takes. Dylan leaves the room, asking Maggie to call the CPD and ask for LT Scott, his dad, and animal control to pick up a rattlesnake.

Will meets with Sharon, wanting to return to Chicago Med. She stops him revealing there is a machine called “vas com” a monitor put out by Cardiovasc labs and they are billing medicare 60% more than any other hospital, which she believes is fraud. She knows Will has a relationship with Dr. Cooper and she believes he is getting kickbacks with the company and Will is going to get proof of this on tape. Will is surprised she wants him to be her spy in order for him to come back. She gives him the ultimatum.

Sharon formally welcomes will back to the ED, introducing him to Dr. Dylan Scott and Dr. Stevie Hammer, both revealing Stevie and Will were in med school together. Daniel is shocked she let Will back as Stevie says that Chicago is a home sweet home. Maggie spots them and realizes that Stevie and Will are still in competition with each other, both finding it unfathomable that Ethan, April, and Natalie are gone. Maggie sends him straight to work.

Crockett is brought in a patient who has a fractured ankle. He asks Lois to move forward and he realizes her lungs are wet and a murmur. Her ankles are swollen and she is retaining fluid. She was one of the trial patients and all the records were removed, Crockett needs her chart so Archer sarcastically says at least Halstead is there to help. They decide to prescribe her medications to reduce the fluids around her heart. Archer hopes Will was able to assists Marcel and makes it clear that it was not his idea to bring him back and he looks forward to Will’s next train wreck.

Dr. Archer meets with Miss Gemma Brooks (Elizabeth Hinkler), who is accompanied by her sister Emma (Emily Hinkler); they refuse to get gowned unless they do it together. Archer orders IV for Gemma for morphine but refuses to do so for Emma as well. They perform an ultrasound and find free fluid and feel they need to do a transvaginal ultrasound and pregnancy test but it looks like they need to do surgery; Emma insists that Gemma is not pregnant. Archer asks that they page Dr. Charles.

Charles meets with the twins, revealing a cyst has ruptured and bled and if they cannot fix it they will have to remove it. Emma insists that they will have to remove hers then too as they have to have matching scars and they always planned on getting pregnant at the same time and if she can’t get pregnant that Emma will not either. They admit that when they were little their mother would not allow them to do anything the same, including dressing and now COVID was really was good for them and now they are one person. Charles meets with Archer, concerned that they are delusional and have no individuality. They cannot operate on a healthy twin, but there is a small chance they can do this without operating on the sick twin.

Dylan informs Will that he knows his brother, Jay, as they used to be in the same line of work, but Maggie interrupts them with a PAEDS call. He meets 10-year-old Jasmine whose motor and speech are intact. She does have sickle cell issues but it never seemed to bother her, suddenly the mother stumbles and the doctors explain ow a blood transfusion is the best thing to do, especially since a parent is the best match.

Matt Cooper is at the deli where Will runs into him. Will suggests they get a drink some time and he agrees. Meanwhile back in the ED, Gemma is hypertensive and in severe pain. Archer says she needs to go to the OR now but Emma is the one who keeps pushing to put her in surgery too; Dr. Charles watches on as Archer storms off saying, See this!”

Emma and Gemma are both in gowns when Charles walks in. He appreciates how they both want to get pregnant at the same time. He says genetically they are the same person, but he explains that if Emma has a baby with her one ovary, it would essentially be a baby for both of them and should be a satisfying joy for both of them. Gemma agrees and Emma says she will think about it.

Dylan reveals that Jasmine had a stroke and her family doctor should have told her mother that. Stevie admits that Jasmine should never have been as sick as this if she was on the proper medication; her mother feels she should have protected her. Stevie assures her that the stroke wasn’t very severe and they will make sure it never happens again.

Anders doesn’t care what Charles had to say as long as he played into the twins’ fantasies to get the job done. Suddenly a patient walks in and Sharon walks in, asking Maggie how things are going with her and Dr. Taylor, her biological daughter; they are complicated but working.

Nurse Doris (Lorena Diaz) calls over Dr. Halstead who finds Dr. Marcel dealing with Lois, preparing her for surgery. Will thinks he knows better because he dealt with the patient and accuses Crockett of doing the procedure because it is a bigger fee and filling his pockets with money from medicare. Crockett is upset, questioning if that is what Will thinks he is all about. Will apologizes as Crockett reminds him that Lois is his patient and he is taking her into surgery.

Dr. Matt Cooper joins Will in the observation room, suggesting vas com but leaves when Crockett shuts him down. They notice that Will is right and Crockett changes the procedure the right way as Will looks on.

Maggie checks on Jasmine, suggesting her mother steps out to get some coffee, but when she steps up she stumbles again. Dylan and Stevie grab her and escort her to another gurney. They request an x-ray and learn her knees are extremely arthritic. Stevie requests Toradol, then asks Alicia if she is living in her car and she is very young to be having such advanced arthritis. Alicia breaks down as Stevie says she is only asking so they can help her. Dr. Scott says that is an impressive call but she scoffs saying she was surprised he didn’t catch it since cops have such experiences with homelessness.

A nurse calls for a doctor at the nurses’ station, Maggie tells her daughter that she needs to go in. She solemnly walks in and calls the time of death. She offers her apologies to the husband and walks out with tears streaming down her cheeks. Maggie approaches her, knowing it was hard, and gives her an apology.

Will walks into Sharon’s office, saying he is not the guy she needs. He is uncomfortable with lying and sneaking, so if him being there depends on that he would just as soon would somewhere else. She hands him a recent case of a young man who had a vas com installed during surgery and he developed gane green, 2 weeks in ICU, and then lost his leg. If this was an unnecessary surgery then this was a tragedy that should never have happened.

Gemma is being put to sleep for her procedure as Daniel goes to sit with Emma. In the midst of their conversation, he suddenly realizes that Gemma and Emma switched spots and he rushes to the ER, ordering them to stop the operation; everyone is shocked.

Dr. Dylan Scott sits with his young patient, warning him to stay away from his knocked friends as he has people looking out for him and for him to stay safe as people care about him; not revealing to his parents what really happened.

Dr. Archer says at least the twins have matching scars now and Dr. Charles says in his 40 years, never has he ever…., not even close; but at least he caught it and that is a win!

Marcel finds Will in the locker room and admits he was right knowing his patient. Will says Natalie’s mom is doing well, in a large part thanks to Marcel. Will admits he misses her, so does Marcel, tapping Will on the shoulder, saying he will see him tomorrow. Dean learns they are admitting the patient with sickle cell and they are bringing in a cot for her mother. Dylan is hoping there is a trial for the sickle cell issue and will give them beds for more than a night.

Stevie leaves the hospital and finds a homeless encampment, calling out for her mother. She goes to visit her in her tent, admitting it took her a while to find her after her van broke down. Stevie asks about her meds and quickly wants to check her mom’s heart, saying she will get her more pills as she says she ran out. She is congested and did get vaccinated. Stevie pleads with her to get off the streets, refusing to let her live like this. Her mom backs away from her.