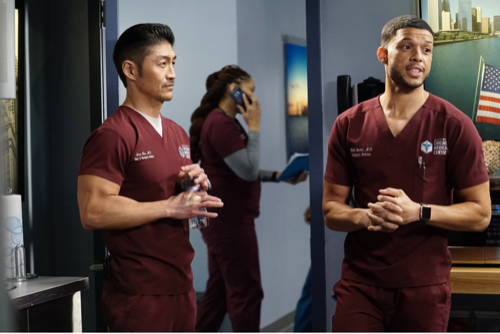 Tonight on NBC their medical drama Chicago Med airs with an all-new Wednesday, February 3, 2021, premiere episode and we have your Chicago Med recap below. In tonight’s Chicago Med season 6 episode 5 called, When Your Heart Rules Your Head,” as per the NBC synopsis, “Dr. Halstead is finding continued success in his trial. Dr. Charles’ daughter, Anna, receives life-changing news. Noah finds himself in a situation, not even April can fix.”

In tonight’s episode Manning slept with Crockett. It wasn’t anything they planned. It just sorta happened. They were friends first and that turned into something more after they started lightly flirting. Manning knows this relationship isn’t going to go anywhere. She’s met plenty of Crockett’s exes and he hasn’t a meaningful relationship with anyone since his daughter died. Crockett tended to keep people at distance after that.

He was even doing so with Manning which she chose to ignore. She waited as Crockett lowered his defenses and he came to trust her. He even turned to Manning when he was in trouble. He performed an unauthorized surgery that could have gotten him fired, but he asked Manning to help him with that case and she did.

Manning was willing to risk her own career for Crockett. She showed she was loyal and they were both so happy afterwards that they hadn’t gotten fired that they just fell into bed together. Manning snuck out the next morning without talking to Crockett. He came to work the next day to find her working like nothing happened and he asked her when could they do it again.

Crockett wanted to pursue things with Manning. He didn’t want to leave it at one and done. He asked her when could they next get together and she played light. She said she’ll see. Manning knows that Crockett isn’t ready for a real relationship and so she doesn’t see him in that light. She sees what they’re doing as casual. They were going to take things on a day to day basis.

Manning hadn’t wanted anyone to know about her new relationship status with Crockett. She was going to keep it to herself when Maggie caught a look between the two and she later asked Manning about it. Manning was unable to keep her secret in the face of Maggie’s curiosity. Maggie is her best friend and so she spilled everything. She mentioned she was doing the casual thing with Crockett.

She also asked Maggie how Auggie was doing while they were talking. Auggie is Maggie’s foster son and he’s sick. He needs a liver transplant. He was on the list for one and his foster parents were told that it could be a long wait for him because he wasn’t considered a priority. Maggie hadn’t liked that.

Maggie decided to send Auggie’s DNA into an ancestry website where she was hoping to find to someone who was willing to be a donor. A living donor could donate a part of their liver and that would be enough to save Auggie’s life. Maggie hasn’t heard anything back from the ancestry website. She still has her fingers crossed and in the meantime her husband was taking of Auggie.

He was at home with their foster son and she was working at the hospital because as a nurse she was considered essential. This didn’t stop Maggie from checking with her family or her friends. She even had time to make an appointment with Dr. Charles because Charles had wanted to check up on her. And she told him she was fine.

Maggie said she was better than ever. She asked to be dismissed early because she was afraid the ED was on fire without her and while it wasn’t necessarily on fire – there was an issue. The issues came about with Crockett and Noah. Noah finished his research rotation and he was back in the ED. Only Noah’s first day back had been a horrible time for him because that’s when he met Dr. James Coleman and Coleman was a legend.

Coleman founded the largest free clinic on the south side. He and his wife came into the ED because they found unconscious after a neighbor spelled a gas leak. Everyone had assumed that Coleman hurt himself after passing out from the gas leak. Their assumption because that’s not what happened and the truth came out after Coleman’s wife Phyllis died.

Phyllis didn’t die from inhaling gas. She died from a drug overdose and it turns out she killed herself. Phyllis had wanted to die. Her husband helped her to do it and that he tried to kill himself as well. He also tried to hide what they did by creating a gas leak so that his clinic was directly effected by his behavior. What he did was illegal. It was assisted suicide and the doctors on his case had to report it to their Chief.

Noah and Crockett told Choi. Choi was the one who said they had to call Chicago PD and report Coleman. Neither Crockett nor Noah had liked that decision because they sympathized with Coleman and they firmly believe he was just following his wife’s wishes. Noah was especially upset because he used to go to Coleman’s clinic.

The clinic even saved Noah’s father’s life. Noah never forgot that and he believes that they should support Coleman for all that he did, but Choi disagreed and so did April. April usually finds Choi to be too tough just not this time. April felt Choi was now acting as Chief and that came with responsibilities. He couldn’t afford to put the hospital at risk and that’s will happen if they try to cover up a crime.

Choi called the police. They came and they realized that Coleman couldn’t be moved until he was fully checked out. They didn’t think he was a flight risk. They left him at the hospital as they got their papers in order and Crockett was busy doing something else. And so he left Noah in charge.

Noah deliberately left a syringe filled with medication within arm’s reach for Dr. Coleman. Coleman did what Noah suspected he would do and he killed himself with the syringe by pouring it straight into his neck. Noah made sure he was slow to respond. He also didn’t want to do CPR and it was Choi who forced Noah to exhaust every measure.

Choi knew right away something was off. He just didn’t know how to talk to Noah about it because Noah wasn’t just some resident. He was April’s brother and she has history with Choi. Choi had a dilemma. He was figuring out what to do as April herself was getting into an argument with Halstead. Halstead was running a clinical trial for heart patients and April believed she found the perfect person.

April wanted Mr. Booker to be a part of the trial. He was a former Covid patient of hers and now it looks like he’s suffering from longterm damage. He now has heart failure. April has gotten the chance to get to know Booker really well and she didn’t want him to die. She wanted him to join the clinical trial. She asked Halstead to include him and he refused.

Halstead said that Booker wasn’t a good fit because of kidney damage he was facing. April went on to prove that Booker’s numbers were just naturally high and that he didn’t have kidney damage only it didn’t matter anymore. Halstead couldn’t afford to let someone like that into his clinical trial. And he denied her request at first.

Halstead couldn’t let Booker into the clinical trial as is. He instead worked behind the scenes to raise Booker’s numbers and that allowed him to include him. He no sooner had given April the good news that she ran into her brother. Noah went running to her after he talked to Choi. Choi knew what Noah did. He also told Noah that he was going to report him to the police and so Noah could lose everything.

He could lose his medical license. He might even be facing jail because of this and so April tried to talk Choi down. She begged him not to report her brother. She told him if he couldn’t do it for Noah that he could at least do it for her. April begged and she left Choi in a horrible position.

Choi didn’t report Noah to the police, but he did fire him for negligence and there was nothing that April could say in his defense because they both know things would have worked out differently if Noah had been anyone else.

Maggie meanwhile heard back from the ancestry website. It turns out they couldn’t find any relatives for Auggie and so she’s back at square one in finding a possible donor.

Manning also had an issue because she was treating Dr. Charles’s daughter Anna. Anna asked for birth control because she was having sex with her boyfriend and Manning couldn’t give her the birth control because the blood work showed that Anna is pregnant. Anna is a pregnant teenager. She doesn’t want to tell her parents because they were currently having a custody battle over her.

Her mother wanted to take Anna to Phoenix, Arizona and Anna wanted to stay in Chicago because that’s where her life is. She also didn’t want to be separated from her father. Nor did he want to lose his youngest daughter. And so Manning told Anna to talk to her parents about her being pregnant, then later she went back to Crockett’s hotel room to have another night of fun and she ended up running into Crockett’s ex-wife Claire who was visiting.

Charles later spoke with Maggie again and this time she admitted that she was tired of always having to be strong for everyone else.

And even Goodwin had a problem when her son told her he wanted to move out and she resisted it at first because she had gotten so used to living with her son that she was going to miss him with him gone.