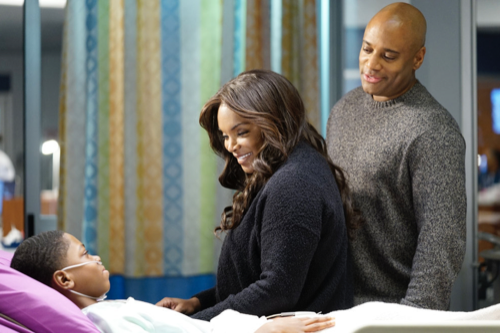 Tonight on NBC their medical drama Chicago Med airs with an all-new Wednesday, February 10, 2021, premiere episode and we have your Chicago Med recap below. In tonight’s Chicago Med season 6 episode 6 called, “Don’t Want To Face This Now,” as per the NBC synopsis, “Dr. Choi helps a patient with chronic pain find a solution. Dr. Halstead considers a new path. Dr. Charles and Anna bond over a scary situation.”

In tonight’s episode, Dr. Choi fired Noah. He had to after the resident let a suicidal man die on his watch. Noah was fired for negligence and both men kept quiet about why Noah was being fired because of the way Noah’s mistake didn’t prevent them from getting another job. However, things have been awkward between Noah’s sister April and Choi. The two used to be in a relationship.

They were once upon a time serious about each other and they tried to have a baby together. Their relationship fell apart from all the stress in trying for a baby. They were now friends or at least they tried to be friends and then this thing with Noah happened. April didn’t believe Choi should have fired her brother. She thought he could have given him a second chance and so April kept her distance from her ex.

April had needed time to cool off. Only she noticed how the others on staff all thought Choi was being too hard on Noah and that made her see sense. She suddenly felt guilty about the way they were talking about Choi because she knew the truth. She knows that Choi should have called the cops on Noah. The only reason Choi didn’t do this is because of his former relationship with April and the fact he still cares about her.

April also cares about him too. She saw him looking stressed out in the canteen and she tried to talk to him, but Choi didn’t want to discuss what was going on. Choi tends to internalize his problems and that was another reason why their relationship didn’t work out. April couldn’t help if Choi refuses to admit there was a problem.

Choi was Chief of the Emergency Department. He was Chief while the hospital and the outside world was experiencing a pandemic. His job, therefore, is very stressful. Choi could have opened up to April and instead, he let the opportunity pass because he didn’t want anyone to know he was drowning.

He was drowning in the paperwork and the daily decisions that had real-life consequences. Choi needed help. He should talk to someone even if that someone is not April and so he pretended like everything was fine as he checked out his latest patient. Choi dealt with a man that suffered severe headaches. This poor man has seen every doctor he could and he has tried everything. It just doesn’t stop the headaches.

Choi was dealing as best as he could for his patients. He had April assisting him and, when she wasn’t working alongside her ex, she was helping Dr. Halstead. Halstead was treating her former patient Kelly Bissett. She had been the kidnapped victim that tried to go back to her kidnapper. Kelly was reunited with her mother when April last saw her and unfortunately, life hasn’t gotten better for Kelly.

She threw herself out of the car while it was in motion. It believed that she tried to kill herself and so Halstead had to treat her injuries as well as call for Psyche. Dr. Charles was called in. He had been on Kelly’s case when she originally came to the hospital and he thought she would be adjusting to being back home. And so before he saw Kelly, he spoke to her mother.

Mrs. Bissett said she had been taking Kelly to the boardwalk. Kelly used to love it as a child and her mother thought she would love seeing it again. Her mother never thought she would jump from the car. Then again she never knows what’s Kelly thinking. Kelly is very secretive and Charles said that’s to be expected. Kelly was kidnapped as a child twelve years have passed. She’s now an adult and her mother needs to start thinking of her in that sense.

Charles understands as a parent how hard it is to accept a child growing up. Nevermind, having that child kidnapped and they grew up without you. Charles believes he can help Kelly and her mother. He’s also been thinking about his own situation.

Charles’s teenage daughter Anna is pregnant. He found the fliers detailing her options and he got a confirmation from Manning that his daughter was with child. Anna doesn’t know what she’s going to do about it. She’s a scared fifteen-year-old. She and her boyfriend had sex once and they even took precautions. She never thought she would get pregnant from that one encounter. She specifically went to the doctor’s to get birth control and was told she couldn’t be given that because the damage was done. Anna is now in a position where she has to make very adult choices. Her father talked to her about it and he told Anna that she has to tell her mother. However, Anna doesn’t want to do that.

Anna’s mother doesn’t want her dating. She thinks Anna is too young to be dating and so she’s forbidden it and Anna couldn’t now go to her with news of her pregnancy or her boyfriend. Anna doesn’t think her mother will understand. She also thought her parents were too caught up in the custody dispute to remember her and so she’s also pushing her father away. Charles doesn’t know what to do about his own situation. He chose to go back to work and deal with what he knows. He talked to Kelly. She explained to him how her mother keeps talking about the past and how she doesn’t remember it. She doesn’t remember baking cinnamon buns every Saturday or reading Harry Potter Books. It only hurts her when her mother brings up the past.

Charles did his best to be there for Kelly. She needed someone to talk to that she didn’t feel was comparing her to her old self and so Charles became that person for her. He was treating her as Choi figured out what was wrong with Eric Bowman. Bowman has a rare condition in which a valve in his heart was connecting to a nerve in his brain and he was in terrible pain. It was also so rare that the other doctors couldn’t diagnose it without seeing everything Bowman was experiencing. His jaw-closing up. His face feeling pain just from the air in a fan. Bowman was in constant pain and Choi figured out what was wrong. Choi brought in a brain surgeon and they could put something in to take the pain away. And so his wife gave her consent for the surgery.

Choi was so focused on the case that he hasn’t been sleeping. He’s just been drinking coffee and April warned him to let up and he was ignoring her. Choi didn’t want to take advice or slow down. He felt he had to run things and so that’s what he did. He even tried to tell Halstead that he couldn’t do a conference despite Halstead clearing it with him several weeks back, but that was okay because Halstead ignored him and he did it anyway. Halstead was even told that he has flair for the camera. He’s been doing this medical trial with heart patients and it seems might lead to something else. Something bigger for him. Halstead turned down the offer when he first heard it because he said he was an ER doctor and so he was advised to keep his options up.

Charles also figured something out with Kelly’s mom. It turns out her mother was exaggerating the past if not making things up because she felt bad she wasn’t a better mother to her daughter and she just wanted to fix it. Only her daughter doesn’t perfect. She just needs her mom and so Charles was able to settle things there. He later returned home with pizza because he wanted to use dinner as a chance to talk to Anna only she informed him that she was bleeding and so she had to be rushed to the hospital.

Maggie meanwhile found a donor for Auggie and DCFS wasn’t going to sign off it because they heard that there was something wrong with the liver. And so they were demanding a relative sign off it but Auggie doesn’t have any relatives and so Maggie and her husband were going to adopt him and they were going to keep on fighting for him until he gets a liver.

Choi later took Halstead to task for doing that conference and Halstead just basically blew him off because he cleared his patients for the day and he had the free time to do it. And later he talked to Sabeena about his options again because he thought it wouldn’t hurt to see what was out there.

Anna suffered a miscarriage and now she’s hoping she doesn’t have to tell her mother about it.

And then there was Crockett. He met a patient who found out they had cancer and who didn’t want to fight it because she watched her mother die of cancer. And so Crockett spoke to her about his own experience in the hope that it would help change her mind.