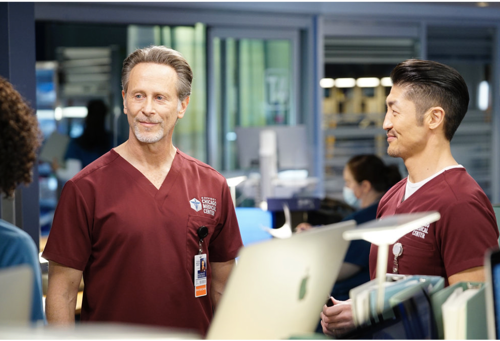 Tonight on NBC their medical drama Chicago Med airs with an all-new Wednesday, March 10, 2021, episode, and we have your Chicago Med recap below. In tonight’s Chicago Med season 6 episode 8 called, “Fathers and Mothers, Daughters and Sons,” as per the NBC synopsis, “Choi hires an old Navy colleague to join him in the ED; a final custody hearing threatens to separate Charles and his daughter; Maggie must make a choice that will change Auggie’s life.”

In tonight’s Chicago Med episode, Dr. Choi is doing better. He’s back on his feet. He’s back at work and so Choi wanted to act as nothing happened. He wanted to continue working. He was Chief of the ED and he wanted that as well as his old job. However, Sharon told him that he needed to hire someone to fill his old spot.

She thinks it will be best for his health if he doesn’t task himself like he was doing before and so she told him to hire someone Anyone. She even gave him a list of doctors that had just become available because their rural hospital was bought out and Choi recognized a name on the list. It was Dean Archer. He was a senior medical officer in the Navy alongside Choi and he helped to teach Choi everything he knew.

Choi was sad to hear that a great man like that had lost his job. He decided to reach out to his old mentor and to get a feel of him. Choi was considering giving him the job as Dr. Manning was walking into her mother’s room and finding her out passed out on the floor. Her mother was unresponsive. Manning didn’t know what was wrong with her or if it was Covid-19. She just wanted to get her mother’s help.

Manning also hadn’t wanted her young son to see what was happening to grandma and so she told him to stay in the living room. Only the little boy ignored her wishes because he had needed help with a game. He walked in and he saw his grandma passed out on the floor. It scared him. It scared Manning.

The three of them went to the hospital. Manning’s best friend Maggie would normally have run to her side and yet she didn’t this time because she had been with Auggie. Auggie was the little boy that Maggie planned on adopting with her son. They put in the papers and they were just waiting for the finalization when they heard back from Auggie’s brother.

Auggie’s brother had been found. He was adopted by a family that lived out west and they came to visit him so that the boys will know each other. The other family also came because they wanted to see if they could adopt Auggie. Auggie’s brother doesn’t have any other siblings and his adoptive parents wanted him to be raised with one. And Auggie was right there.

Keshawn’s parents mentioned it to Maggie and her husband. Maggie was quick to tell them “no”. She loves Auggie and she wants to raise him. Her husband on the other hand had later told Maggie that they need to have a conversation about it and Maggie hadn’t liked that. Maggie knows that the two weren’t planning on having kids. She thinks her husband is using the opportunity now to back out of the promise to Maggie and she wasn’t afraid to tell him so.

Maggie loves Auggie. He’s her son and she doesn’t want to give him. She just wishes her husband was as sure about this as she was. Maggie later did a shift at the hospital. She was in the ED when a woman came in claiming her baby daughter wasn’t breathing and so Maggie called over Dr. Lanik.

The two of them took the child out of the hysterical mother’s arms only to find the baby wasn’t real. It was a doll and the woman who brought it in had thought the doll was real. She kept saying that her baby was sick. She begged them to save the life of her child/doll and so Maggie called for Dr. Charles.

She had to call for him several times. Dr. Charles hadn’t noticed them at first because he heard back from the judge in his custody case and he lost. His ex was given the approval to take his daughter to Arizona. Charles was going to lose his daughter when she needed him the most. His daughter hasn’t been the same since her miscarriage and she still hasn’t told her mother about the miscarriage.

Charles didn’t want to lose his daughter. He wanted to keep fighting and at the same time, he realized that he was probably just going to be told the same thing by a different judge. His ex-wife was their daughter’s chief caretaker. She’s been in charge of everything this whole time and so no judge is going to challenge that. Charles realized the lost cause for what he was. He tried to focus on work and he tried to help the woman with a fake baby.

He diagnosed with a condition that could only be brought on from some kind of brain trauma and so they had the woman tested. She told them that she fell. Only a CT revealed that she suffered a bad fall a year ago and it’s odd that the woman didn’t mention it. And so Charles tried to find out more about her fall from the woman herself.

Tally claimed she was married. She said her husband was a long-haul trucker and that he was out on the road. She also claimed her doll was a real baby. Her word couldn’t really be trusted and so it was a mystery for Charles and Maggie. They were doing their best to help the confused young woman while Manning was hearing back from Crockett about her mother. Her mother has a heart condition.

It could potentially change her way of life and so Dr. Halstead came to check up on her. Halstead was engaged to Manning. He knows her family very well and he wanted to check on Carol because he still cares for her, but him doing so was a problem for Crockett because Crockett was now dating Manning and he was jealous of Halstead being around her and her family.

Carol also put her foot in it when she told Halstead how much she missed him in front of Crockett. Crockett now doesn’t want Halstead around and Halstead wasn’t paying attention to him. Halstead approached Manning about his clinical trial. He thought Carol should join the trial because she was an ideal candidate and Manning wasn’t sure because she thought if they bet everything on the trial and it didn’t work that will be too late for her mother to do the surgery.

With the surgery at least, Manning is guaranteed two more years with her mother. She wasn’t sure if she wanted to risk that on a clinical trial and so Manning brought the decision to her mother. And her mother agreed to seriously consider the clinical trial.

Carol canceled her surgery with Crockett. He later found out why and he confronted Halstead. He demanded to know what Halstead was doing. The other doctor told him that he was just doing his job and that it wasn’t his fault if Crockett was jealous. He has a history with both Manning and Carol and either Crockett accepts this or he doesn’t. Either way, it wasn’t Halstead’s problem. Halstead and Crockett’s beef was juvenile in the face of everything they have to deal with and that goes for the other doctors as well.

Choi hired his old mentor. He thought he was doing the guy a favor and he didn’t just how ungrateful Archer could be. Archer treated Choi like he was still his insubordinate and not his boss. He also talked Choi into making decisions he normally wouldn’t make.

Archer talked Choi into using the Hybrid OR for a patient. Choi wouldn’t usually do that or try to do a surgery he was unfamiliar with, but he had something to prove to Archer and so he kept taking risks. The patient was saved because of the risks Choi took. Only April later told him that the patient’s life wouldn’t have been endangered if he hadn’t let Archer dictate to him what he should do.

Meanwhile, Maggie and Charles helped Tally. Tally was attached to the doll because she had an accident carrying her real baby and her daughter died. She hadn’t been there at the end of her daughter’s life because she was too injured and so it had been her ex-husband who made the decision. Charles and Maggie called in the ex-husband. They told him about Tally’s condition and he agreed to help.

Together, they told Tally that her baby/doll was really sick. They walked Tally through saying goodbye to her child and being able to finally let go. Maggie saw that moment when it happened. She broke down in tears and she spilled to Sharon. Maggie had gotten pregnant when she was sixteen. She had been talked into giving up her baby back then and now she doesn’t want to lose her child. She doesn’t want to lose Auggie.

Talking about it with Sharon had helped because Maggie has been treating her past a terrible secret and so it was good to get it out there. And to get advice. Maggie realized later on that she had to let Auggie be with his brother. She had loved growing up with a sibling and she couldn’t deny Auggie that experience.

And Charles went to his ex-wife and he told her about their daughter’s miscarriage. He told her because he wanted her to know that Anna needs support right now but Sue accused him of trying to manipulate her. She even got angry at him for not telling her sooner that their daughter had a chemical pregnancy. Sue went to go speak to her daughter and she came to the decision that her way wasn’t working with Anna. And so she dropped off Anna at Charles’s house and she told him that Anna could stay with him.

And Manning eventually convinced her mother to do the surgery. They both decided to put their faith in Crockett and it guarantees them two more years together.