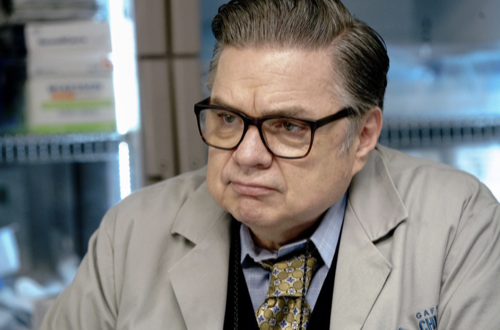 Tonight on NBC their medical drama Chicago Med airs with an all-new Wednesday, April 7, 2021, episode, and we have your Chicago Med recap below. In tonight’s Chicago Med season 6 episode 11 called, “Letting Go Only To Come Together,” as per the NBC synopsis, “Ethan teams up with an unexpected person to treat a famous tennis player who is afraid his career might be over. Goodwin’s new protocols cause a stir.”

In tonight’s episode of Chicago Med, Crockett officially met Manning’s family. Manning and Crockett have been dating for a while and it was only natural that he was introduced to both her mother and her son. Crockett knew her mother before this because he had been the woman’s doctor. However, this was different. This was them getting to know each other and it had been a mixed bag. Owen didn’t seem to mind Crockett.

He didn’t have any leftover questions for his mother that night and so it was more her mother that was an issue. Carol lived in a bubble long before it became necessary for the pandemic. She didn’t really know immigrants and Crockett was the child of immigrants. His parents were from Iran and they came over when he and his sister were just kids. Carol asked him if that meant he was Muslim as well.

Crockett isn’t Muslim. His family actually practices a religion that predates Islam and it about three good pillars on to base your life on. Carol has never heard of his faith before this. She was finding out about it now because she was getting to know someone and so she had questions and there were a few concerns.

Carol noticed that Crockett was a daredevil in a sense. He’s someone who will be paddling in crocodile-infested waters and he’ll get closer to the beasts rather than paddle away because he wants to get a picture. Crockett is unlike any other man Manning has dated. Carol was going to need some time to get used and Manning meanwhile was enjoying her time with Crockett. She later apologized to her mother.

Manning thought Carol was out of line with her questions. Only Crockett said he was used to. He grew up in the Bible Belt and so he’s always known he was different. He didn’t hold Carol’s questions against her. He just wants to move on and a new patient was the best way to do it. Manning and Crockett worked together when Lisa Holtzman came in. She was a middle-aged woman who hasn’t used the bathroom in hours and so her bladder was swollen.

It was a first for the doctors. They’ve never seen someone come in so well-prepared and so this case with the patient soon took on an odd note. Manning was trying to figure out what’s going on as Halstead was trying to do the same with his own patient. His patient Liam McIntyre came in after experiencing a car accident and he kept looking in the corner of the room.

Liam still did it when no one else was there. He also started to talk to the empty space and so Halstead called for Dr. Charles. Charles later questioned Liam. He found Liam was newly vaccinated and that he was eager to get out of the house as much as possible. Liam also lost his wife three weeks into the lockdown. She died from an aneurysm.

Liam and his wife had planned on using the lockdown to finally take the break they’ve always talked about. So, losing her had been tough. Liam had spent most of the lockdown alone and it’s okay if he manifested his dead wife. He probably did it for the company. Charles told Halstead that other than this one thing Liam is perfectly normal and he didn’t think they need to intervene. Halstead didn’t agree with his assessment. He thought seeing a dead person was worrisome. He also noticed that after Liam had almost died he had gone into a panic not because he was injured but because he couldn’t see his dead wife for a moment. Liam was only reassured once he saw his wife again. And so Halstead did a thorough medical check on Liam.

Halstead later learned that Liam suffers from a brain tumor. The tumor is why he’s seeing his dead wife and knowing that had changed things for Liam. Liam doesn’t want to remove the tumor. He doesn’t want to stop seeing his wife. He also doesn’t care that this tumor is slowly killing him and that he’s going to keep having seizures. It’s what caused his car accident. The tumor will kill him one way or another and still, Liam refused to remove it. He didn’t want to say goodbye to his wife a second time. He wanted to go home with “her” and he told the doctors he was refusing care. Neither Halstead nor Charles liked that plan. They thought it was dangerous and so they looked for ways to force the patient into accepting treatment.

They could use a psych hold. There was nothing mentally wrong with the patient and so the doctors went looking for something else. April herself had a troubling patient. She was back in the COVUD ICU and she was dealing with a nonbeliever. Her patient is Gina Caine. She doesn’t believe the coronavirus exists and so she claims not to have it. She was struggling to breathe, she had been given a positive test result, and she was surrounded by other COVID patients. Common sense should have kicked it and it didn’t. Gina continued to be a problem. April barely managed to get her to accept the oxygen because Gina claims she just had the flu and so April sought assistance from Dr. Lanik.

Lanik has been dealing with Gina for days now. He knows she’s difficult and he suggested to April that she just put up with it. April was doing that as Manning figured out what was happening with her patient. Lisa suffered from abdominal pain. She’s been in pain for years now and she’s had several procedures to correct it. Nothing works. Lisa remains in pain and so Manning Crockett ran some tests. They determined that Lisa was suffering from two conditions. The pain comes from both conditions and they weren’t both treatable. To treat them both, would put undue pressure on one of her kidneys and so she has to decide between two procedures to live a life with less pain. Lisa didn’t want to make a choice. She’s been down this road before.

Lisa didn’t think either surgery would help her. She told the doctors that she wouldn’t do any of it and that she needs to just live with the pain. The doctors hadn’t liked how hopeless she sounded when she said that. They decided to look for a way to treat both of her conditions and the only thing they could think of would be a kidney removal. The doctors were going to place her kidney in a different part of her body so that they could treat both conditions she was suffering from. It was a radical procedure but they were doing their best to help her and so Lisa agreed to do it. Lisa was being treated just as April finally got Gina to settle down. April told Gina that “yes, it was a hoax” and that she couldn’t say anything before because she didn’t want to be fired.

Gina believed that the hospital was lying about COVID in order to bill patients more. Once she heard that she had been right, she agreed to be intubated, and then she crashed. She was dying. The doctor wasn’t in the room and so April gave the patient something. It helped Caine to stabilize only it wasn’t something she was supposed to do. April is a nurse and she can only act upon orders from a doctor. She crossed a line when she treated Gina herself and so now she’s in trouble. Goodwin knows a little something about that because she too got in trouble. She changed the rules for pharmaceutical reps at the hospital and those same people went complaining to her boss. Goodwin was told her new rules will be struck down. The hospital will continue to act as they always have.

Goodwin hated being reprimanded. She came up with the new rules after her own son went rogue and she was just trying to help although now her son is angry at her and so is her boss. Goodwin went to Charles to speak to someone. The two of them were able to hash their woes in parenting. Goodwin realized she needed to make amends with her son and Charles also realized what to do with his patient, Charles was later able to convince Liam to get the surgery.

He sympathized with Liam and he told him how he lost his own wife. Hearing that it’s going to get better, Liam agreed to the surgery. He had the tumor removed and now he doesn’t see his dead wife anymore. This should have been great news for Halstead and instead, he was consumed with jealousy because his new girlfriend Dr. Sabeena Virani likes to play chess with Dr. Choi.

Virani even helped Choi with his patient. He was treating a famous tennis player and she helped him to determine what was wrong with the patient.

And as for Lisa, she finally woke up without pain and so the doctors helped her and they got closer while doing it. Both Manning and Crockett later used the “L” word with each other.