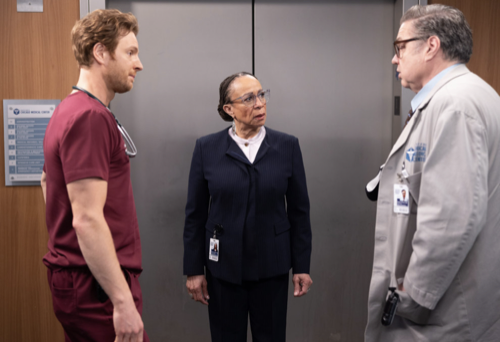 Tonight on NBC their medical drama Chicago Med airs with an all-new Wednesday, April 21, 2021, episode, and we have your Chicago Med recap below.

In tonight’s Chicago Med season 6 episode 12 called, “Some Things Are Worth the Risk,” as per the NBC synopsis, “Archer and Choi respond to a scene that brings back some bad memories; when Carol’s condition worsens, Manning is willing to do whatever it takes to get her mum feeling better.”

In tonight’s episode of Chicago Med, Dr. Daniel Charles’s daughter is once again proving troublesome. Anna keeps sneaking out of the house in order to see her boyfriend and Charles is doing his best to stop her from leaving. He’s talked to her. He’s counseled her on how stressed he is when he wakes up in the middle of a night because of noise and it’s her either sneaking in or sneaking out. However, Anna just doesn’t seem to be getting it.

Ramona is a troubled woman. Her father was a doctor. He apparently always made time for his patients and Ramona seems to have revered him, but then he died. He died and she began attaching herself to other doctors. She stalked an ED doctor at Mercy. She’s no longer interested in him now and so now she’s become obsessed with Charles.

She wants him to be her therapist. Ramona is desperate to spend time with him and Charles knows it. He’s purposely trying to distance himself from her. It’s why she was assigned another doctor at the hospital. Charles was hoping that genuine therapy will help treat her obsessive personality and unfortunately she just doesn’t want to let go of Charles.

Ramona stopped by his office before her appointment with her therapist. She complained about her new therapist. She said she doesn’t think he can help and so she was trying to get Charles to volunteer, but that was never going to happen and this all happened in front of Anna. Ramona saw Anna.

She asked Charles if this was his daughter and right away Anan knew to be wary. She later called Ramona weird. Anna knew that there was something wrong with Ramona and Charles knew that Ramona wasn’t over her obsession just yet. Ramona was later admitted into the hospital after she took something and she refused to say what it was. She said she wanted to speak with Dr. Charles first.

Whatever Ramona took was affecting her. She was vomiting, her pupils were pinpoint, and she had the shakes. Ramona took something serious and it had the potential of possibly killing her. The doctors all wanted to treat her before she died, but she refused to tell them what she took. She wanted Dr. Charles or she was going to let herself die. Charles was told of her condition.

He found out she never met with the other therapist and he didn’t want to see Ramona because he didn’t want to feed her delusion. There was no telling she would stop trying to get his attention after this if he went to see her. Charles and Sharon were both also concerned with the fact Ramona met Anna. Anna is a kid and they didn’t want Ramona using or possibly hurting Anna to get Charles to “love” her.

Halstead was the doctor assigned to Ramona. He was doing his best to treat her and his hands were tied as long as she refused to name what she took. Halstead had already lost a patient for the day. Someone in his clinical trial who was doing better had gotten into a freak accident. Halstead barely gave himself time to grieve before he had been given Ramona’s case and Manning in the meantime was wondering if the dead man’s position could now be given to her mother.

Manning forwent the opportunity to include her mother in Halstead’s clinical trial weeks ago because Crockett convinced her to trust the more reliable LVAD. Now, her mother’s heart has become dependent on LVAD. Her mother was in heart failure and she might need a new heart.

A heart transplant might be what Carol needs after months on the LVAD. Manning didn’t want to lose her mom or risk waiting for a transplant and so she asked Halstead if he could still include her mom. Halstead informed her that open enrollment was closed, but he still spoke with Dr. Virani. He asked his girlfriend if they could include Carol in the clinical trial and she told him its too early to determine if the medication was working or not.

Only Halstead informed her he knew for a fact it works. He unblinded a patient months ago. He was just informing Virani now because he wanted to help Carol and she told him “no”. She was also furious he unblinded someone in the clinical trial. He risked the data as well as both of their jobs.

Halstead went back to treating Ramona. Her health got so bad at one point that he had to bring in Charles and so Charles agreed to see her. He later spoke with Ramona. He got her to give him the name of what she took in return for speaking with her afterward and so Ramona got what she wanted. She told him she took insecticide.

She even named the brand and thereafter she was properly treated. When she next saw Charles, Charles treated her like he would patient. He got her talking about her father and she revealed her father raised her. Her mother abandoned her when she was five or six. Her father then tried to make it up to her by telling her that all they needed was each other and truly that’s all they had.

Ramona didn’t have siblings. Nor did she want any. She wanted her father all to herself and it got worse after she got older. Her father didn’t seem to love her anymore when she got older. Ramona strived over and over to win affection from him but it just wasn’t the same. Charles wanted Ramona to tell him how the relationship changed or why she thought her father stopped loving her when his daughter sent for him. Anna claimed it was an emergency.

The nurse that reported it to Charles had told him it was an emergency and Ramona told him its okay. She wanted him to go check on his daughter. Charles went to go speak with Anna and it wasn’t an emergency. She had wanted the Wifi password.

Any nurse on staff could have given her the password. Charles signed in his daughter so that she could do her homework and then he went back to see Ramona. Only she was gone. Ramona fled once the questions were getting too tough and so there’s no telling what she’ll do next for attention or for whom. Halstead wasn’t made aware she fled because he had left to go to dinner with Virani and their boss at the clinical trial.

Their boss offered to promote Halstead. He told him he’d consider it and it was clear that Virani didn’t want him to take the job or tell anyone about the lie they were covering up. They both just wanted to focus on the clinical trial. They called a medication disposal service to handle the meds of the guy who died and neither Virani nor Halstead knew that Manning canceled that service.

Manning took the dead man’s medication. She later gave it to her mom and no one knew she was giving illegal medication to Carol. Carol didn’t even know.

Choi and Dr. Archer were called out to treat someone in the field and Choi noticed that Archer was suffering from PTSD because the ride had reminded him of the time they served overseas, but Archer didn’t want to see a therapist and he canceled his appointment when Choi’s back was turned.