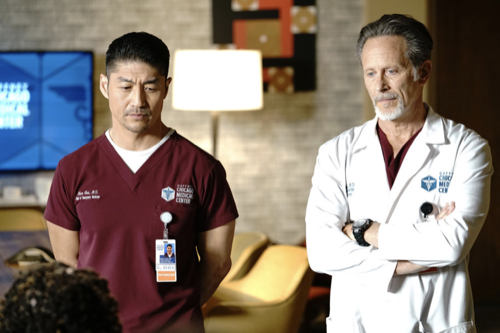 Tonight on NBC their medical drama Chicago Med airs with an all-new Wednesday, May 19, 2021, episode, and we have your Chicago Med recap below.

In tonight’s Chicago Med season 6 episode 15 called, “Stories, Secrets, Half-Truths, and Lies,” as per the NBC synopsis, “Marcel worries he made a surgical error when a recent transplant patient comes in with complications; Carol is once again in distress; Halstead and Manning must take action to right their wrong.”

In tonight’s Chicago Med episode, April was studying to be a Nurse Practitioner. She was already a Nurse. She now wants to be a Nurse Practitioner because it will give her more freedom to act in the patient’s best interest right when they need it and she wouldn’t have to wait on a doctor to order something when she already knows the answer. April got her application in. She was ready to do the work and she hasn’t stopped being Nurse.

She was still working in the ED. She was there and she was assigned to the case when Dr. Manning’s mother Carol came in. Carol was suffering from liver failure. Her skin was yellow and there’s no telling what could cause it. It could be the drugs that Manning has been giving her. Manning stole experimental drugs to give to her mother and her former fiancé Dr. Halstead was helping her do it. The two of them were treating Carol on the side with no one the wiser.

Carol’s other doctors didn’t even know about the drugs. Manning asked for a break from her boyfriend Crockett because he had been one of Carol’s doctors and so she was doing everything possible to hide what she and Halstead were doing to her mom. She even found a way to fob off Crockett when he asked to know what’s wrong with Carol.

Crockett saw her come in and he wanted to help, but Manning pushed him away. She couldn’t let him near her mother and so that created even more of a divide between them because Crockett took her rejection personally. He thought Manning didn’t want him around in any capacity. He felt rejected and that caused him to throw himself into work. He’s been taking later and later shifts at the hospital.

He’s been doing that since Manning first asked for a break. Crockett was so involved at work that he’s barely been home to rest and he was at the hospital when a former patient came in. His patient was James. James was suffering from breathing problems. James had a lung transplant a while back. His breathing problems now indicate his lungs weren’t working and that he might need a new set of them. Crockett blames himself for James’s situation.

He thinks that if his head had been more in the game lately that he could have saved James’s lungs and so he was doing his best to treat James as other doctors were violating their code of conduct. Dr. Archer has been breaking the rules since he joined the staff at the ED.

Archer was hired by his former protégé who believed he owed Archer something after their time in the military together. Since then, Archer has been forcing treatment on patients in spite of their wishes and he’s doing that again with a new patient. His new patient’s name is Mindy. Mindy has a tumor on her brain.

She was refusing to remove it because she heard about horror stories and she didn’t want to be less than her current state when she came out of surgery. Mindy was 18. She played the piano and she was still pretty much a kid. She was more worried about losing the ability to play the piano than she was about her life. Her parents however disagreed. They wanted her to get the surgery and so Archer told them they could gain temporary power of attorney.

Archer even told them that they could act if Mindy were to ever lose consciousness. When Archer said that and in front of Dr. Choi no less, Choi’s red flag went up. He remembers what happened to Archer’s last patient. Archer had had another patient who refused care and then that patient lost consciousness. Archer used that as an excuse to force treatment. He didn’t care about what the patient wanted and the patient was left devastated by the decisions of his doctor.

Archer is doing the same thing now with Mindy. Mindy may be a child. She may be stupid but it was still her body and she gets to make decisions about it. Mindy later lost consciousness. Choi and Archer ran in to treat her and they told the parents the tumor might have created a brain bleed. And silently amongst themselves, Choi asked Archer if he did this.

Archer denied it. Archer also tried to tell the parents that they could force the surgery now and Choi spoke against it. Choi reminded the parents of Mindy’s wishes. They chose to respect that and they didn’t force surgery. They just had Choi relieve the pressure on Mindy’s brain. He drilled in and he created a small hole. Mindy was soon awake again.

The opportunity to force the surgery had past and the only thing that changed was that it brought the issues between Choi and Archer to the forefront. Choi had asked Archer to see a therapist. Archer dragged his feet about it and he only saw Dr. Charles because he had been forced into it. Charles recommended a group therapy session with other vets.

Archer went to group therapy. Only he didn’t speak throughout the session. He said the other men and women there had more important things to say and so he was still refusing treatment for himself. Albeit by different means now. Archer didn’t even see how hypocritical it was of him to force treatment on others all the while denying it for himself and no one was going to make him see differently.

Choi tried. Charles tried. Nothing worked and the other men needed to focus on other patients. The ones that needed them. Charles saw Ramona again. Ramona was a young woman who became obsessed with doctors because her late father was a doctor and she thought needed a man like her father in her life but her father was an evil man.

He molested her all throughout her childhood. He then stopped after she reached a certain age and she took that to mean he didn’t like her anymore. Ramona needed to deal with her traumatic childhood. She tried attaching herself to other doctors and, when that didn’t work, she tried pretending she had moved on past the molestation.

She moved. She got a job. She returned to speak to Charles because she tried to tell him that she was better now and the truth is she didn’t deal with her problems. She freaked the moment she revealed to the therapist what her father did. Ramona went to the rooftop. She later Charles from there to tell him where she was and he found her out on a ledge.

Ramona had been considering killing herself. She thought no one would miss her if she died and so Charles convinced her otherwise. He told her that there were other women like her. He could introduce them to her in a safe place. Ramona needed a safe place and it got her off the ledge when she learned that she finally could have one. Charles was helping Ramona as Archer decided on a different approach with Mindy.

Archer spoke with Mindy about his time in Iraq and how scared he was. He finally learned to open up. He did it in order to speak with Mindy in a language she understood and this time it worked. It hadn’t worked when he did it with another patient but it worked this time. Mindy agreed to have the surgery.

April meanwhile missed her interview to become a Nurse Practitioner. She missed it because she had been helping James. It turns out the lungs that James had been given were infected with Covid-19 and it was April who found this out. April knew that Crockett was beating himself up. She also knew that Crockett was truly talented and that he didn’t miss anything. April’s find saved the patient.

Crockett treated the Covid-19 damage and he saved the patient’s lungs. James doesn’t need a new transplant. Crockett was feeling so confident after he saved James’s life that he called Manning. He asked to speak with her because he wanted to know what was going on. Manning broke down and she told Crockett. She told him how she stole the drugs and how her mother was now dying.

Crockett comforted Manning. However, neither of them knew that Halstead had come clean to Virani about his involvement with Carol and so he risked his medical license as well as his career on Manning. And believing in love with her could mean the end of him.