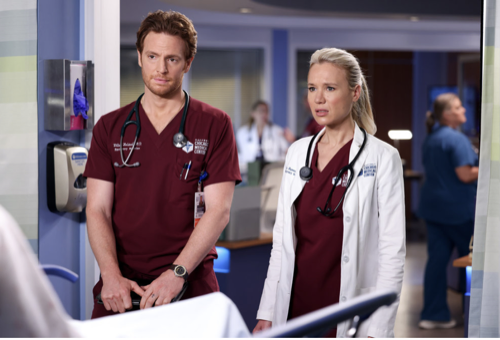 Tonight on NBC their medical drama Chicago Med airs with an all-new Wednesday, September 29, 2021, episode, and we have your Chicago Med recap below. In tonight’s Chicago Med season 7 episode 2 called, “To Lean In, or to Let Go,” as per the NBC synopsis, “Vanessa and Archer disagree on how to handle the victim of a motorcycle accident.

Scott and Charles deal with a UNICEF negotiator with repressed trauma; Hammer and Halstead treat a high schooler with Addison’s disease and a clingy mother.”

Chicago Med begins tonight with Dr. Will Halstead (Nick Gehlfuss) talks to Sharon Goodwin (s. Epatha Merkerseon) about Dr. Matt Cooper (Michael Rady) getting kickbacks from vas com and other companies; Will feeling they are bribes and illegal kickbacks. Sharon feels she needs to know for sure and Will will visit the ICU to see what the critic clinic to see why they are using it and if it is Cooper’s doing. Sharon advises him to be careful. Dr. Vanessa Taylor (Asijha Cooper) finds a gift in her locker and learns it is from Maggie Lockwood (Marlyne Barrett) and thanks to her as it is a birthday gift. Maggie offers to take her out for a drink and she accepts.

Dr. Dylan Scott talks to one of his young patients as she leaves the ED with stitches in her head. As soon as she leaves another patient, Krista is panicking as she took about 14 sleeping pills about 14 minutes ago and he immediately brings her in, ordering some charcoal. Dr. Scott encourages her to drink the charcoal but when she can’t drink it, they insert a tube down her throat and Scott requests for Dr. Daniel Charles (Oliver Platt).

Will approaches Trish at the Icu desk, inquiring about the vas com and why they use it so frequently; but just as she is about to tell him about it, he opens the curtain behind him. Will covers his butt and learns that the device has improved things by 8%, which is supposedly impressive. Cooper explains that it is not a perfect science, but it is vastly better than all other devices on the market.

Sharon is looking for Will but finds Dr. Crockett Marcel (Dominic Rains) explaining a new program as attendings can be advisors to residents to see them through their residencies. Crockett says he will think about it and as Sharon walks away she stumbles, explaining she is a little lightheaded and her sugar is a little high all week. Sharon catches Will in the hallway, learning that anything Cooper says he can explain his way out of it.

An incoming emergency comes in and Dr. Stevie Hammer (Kristen Hager ) and Will Halstead come in, his mother immediately behind him. He fell at the skatepark. They want to check his blood to make sure he didn’t develop diabetes; he’s on a trial for his disease and his mom is adamant he isn’t sick but he wants his mom to calm down.

Dr. Charles meets with Krista who works in the Congo trying to free child soldiers, which both doctors find is impressive. She wants to stay for a bit, but Dylan wants her to stay, so suggests another liter of fluid, and Dr. Charles is concerned of her mental state and needs to try to convince her to stay on her own free will.

Stevie and Will are finding everything is right with the child and are starting to believe this is Munchausen by proxy. Stevie and Will debate about what is going on with Brandon but Will feels they need to deal with it being a possibility.

Dr. Dean Archer (Stever Weber) and Dr. Marcel are called for a motorcycle accident and they have no beds so they need to use the hyper OR. Two patients come in and Marcel deals with Mia who is from the car and gives her medications for her anxiety as he checks on Archer with the motorcyclist. Meanwhile, Vanessa and Archer look at the CT as Archer feels they need a complete amputation. He leaves her to prep the patient.

Brandon’s mother is happy that he is not diabetic and once again explains that she is giving him the right medication as Will asks to see the list of his medications and a social worker is on the way. Brandon learns what the doctors are thinking and he defends his mother. She demands to speak to their supervisor as he admits that he is the one who took the extra drugs; everyone is shocked.

Dylan and Daniel return to see Krista, Dylan revealing he was a cop before he became a doctor; saying one of his superiors told him to talk to someone and after reluctantly going, it was like a weight came off his shoulders. As gratifying as their job was, it was like the whole world because easier. Krista feels she doesn’t have time for that as Dylan says if she doesn’t do it, the kids won’t have her around if she doesn’t. She reveals this is not the first time and Dr. Charles thought that was the case and would like to admit her to their clinic for a few days as everyone needs a break sometimes. She agrees.

Brandon didn’t want to be on the trial and that is why he did this because if he started another trial he would not be able to attend college in London. His mother reminds him that she is only doing what is best for him. Stevie leaves to get the discharge papers as Will feels that Brandon feels he has the right to make his own decision. Stevie reminds him that this is not their call to make. Stevie leaves to fill out the paperwork and Will returns to Brandon who reveals he is turning 18 in 6 months. Will informs him that there is one thing.

Dr. Taylor tells Crockett about her idea with Archer and he would have gone with Vanessa’s idea. She knows Archer is the chief of the ED and as a doctor, she needs to stand by her decision and not give up.

Dr. Charles is on the phone upset that there is no bed and has a patient who is willing to admit herself into the hospital in his care. Archer confronts him about the patient and tells him to look for another hospital to place her. Archer talks to Vanessa about heading up to the OR, She tells him they should try a less aggressive way first and she spoke to Dr. Marcel who agrees with her. He tells her to speak to the family about the risks and if they agree, she can do the surgery with Marcel and both of them will be responsible for it. Maggie overhears and looks a little concerned for her daughter.

Brandon’s mother is furious that Will informed Brandon that he is seeking to be emancipated from his parents in order for him to not go through another trial. Stevie pulls Will out of the room and argues with him as she feels for the mother; Will reminds her that Brandon is their patient.

Dr. Charles has called every hospital in a 50-mile radius, disappointing Dylan too. Dr. Archer wants her to go to a State hospital, where they transfer to the hospital in handcuffs. Dr. Scott is enraged saying Archer treats the hospital like a drive-through hospital and storms off. Dr. Charles finds him on the roof, frustrated, talking about how many times as a cop he had to betray people he was supposed to be helping. Charles reminds him it is not safe for Krista to be alone right now and he will call the State and he knows some people there and Dylan knows some people on the force and he can call them, together they can make them safe.

Maggie confronts Crockett, saying as a person of influence he should be more mindful of what he says; especially over someone like Vanessa. Meanwhile, Stevie finds Ms. Davis in the room, talking about Brandon and when his illness started right after her husband died. She can’t handle the thought of her son living so far away, but Stevie reminds her that she can trust him to take care of himself.

The surgery begins as Vanessa watches on. Dr. Charles explains where Krista is going and when she finds out she panics, calling everyone liars as cops and security hold her down on the bed.

Will smiles as he watches Brandon hugs his mother. He high-fives Will saying he is going to London and praises Stevie for talking to his mother about it. She apologizes for being hard on Will. Paychecks are handed out.

Vanessa learns that Crockett was about to save Shaun’s arm and they can share the news with his arm. Crockett inadvertently reveals that Maggie told him he shouldn’t incidentally throw her into the line of fire so Vanessa asks if he will be her mentor and he quickly agrees.

Sharon learns her sugar has been increasing for the past month, they will adjust her meds and she is only dealing with the usual work stress. Will interrupts and he feels they are dealing the wrong way with Matt Cooper, suggesting he can be the rogue doctor and use the vas com. Sharon knew he was the right man for the job.

Maggie stops Vanessa because they were supposed to go out for drinks. She just wants her to treat her like everyone else and leaves. The police arrive to escort Krista to the hospital. Dylan learns Charles has been doing it for 35 years and reminds him that they need to hang onto the wins.