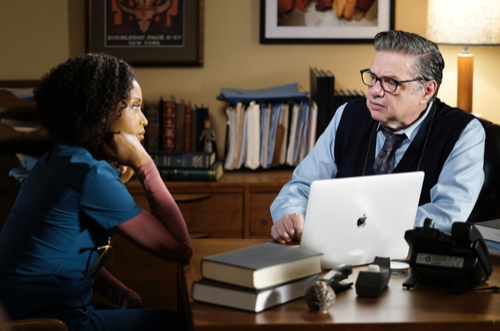 Tonight on NBC their medical drama Chicago Med airs with an all-new Wednesday, January 13, 2021, premiere episode and we have your Chicago Med recap below. In tonight’s Chicago Med season 6 episode 3 called, “Do You Know The Way Home,” as per the NBC synopsis, “Dr. Charles and April team up to take on a mysterious patient in the ED.

Dr. Halstead is forced to make a life-or-death decision for one of his trial patients. Dr. Marcel is confronted by his past when a former acquaintance is brought into the ED.”

There’s been some flirting between Dr. Crockett and Dr. Manning. The two exchange their temperatures when they first came to the hospital and it was a sweet joke when Crockett reveals he runs a little hot. It sure made Manning laugh. She thought Crockett was funny and the doctors do have a special relationship. Manning was the only that Crockett opens up to about his late daughter.

He sees her as a friend and he doesn’t have that many friends at the hospital, but the two do seem like they could become more and the first person to spot is was Maggie. Maggie told Manning that she saw them flirting. She said she didn’t even joke about her own temperature with her husband and so she likes that her friend can laugh about that with someone. And she thinks it might turn into something more.

Manning dismissed the idea. Her dating history has been a bit all over the place what with being engaged to Halstead who ruined their wedding day by going into witness protection and then engaged to Phillip who turned out to be a psycho. Manning’s last good relationship was with her late husband.

She hasn’t been with anyone as good as that for a while and she wasn’t sure if she wanted to jeopardize her relationship with Crockett by viewing more than it was. They were friends. She thinks they should stay friends and so she dismissed Maggie’s suggestion. She instead focused on work. Manning had her first telemedicine call. She had to treat a patient over the phone and it wasn’t as good as having a patient right in front of her.

The telemedicine wasn’t something Manning would sign up for her. Only the decision wasn’t hers. It was someone else’s and that’s happening a lot now. Choi took over from Lanik. He’s running the ED and as a Chief he had to create schedules as well move people around into different departments. He did this with April. April was working in the Covid-19 unit and she was there more than any other nurse.

She was there for a full month when Choi told her he was moving back to the ED. April hated that idea because she felt she was doing better with the coronavirus patients and she wanted to finish the journey with them. She wanted to see when they were released. She didn’t want to be moved and Choi moved her anyways because he couldn’t favor April.

April was his ex-girlfriend. The two were almost parents because they had been trying for a baby when their relationship collapsed and it only did so after April cheated on Choi with Crockett. The relationship with Crockett didn’t go anywhere, but everyone knew Choi still had feelings for April and he couldn’t allow that to get in the way of his job. He had to be impartial.

He moved April back to the ED and she was asked to treat a patient who was shy around needles. Even Dr. Charles was called as a therapist. The two were supposed to help this woman, Lisa, be tested and instead they noticed some worrying signs. Their patient suffered from extreme Vitamin D deficiency. She wasn’t getting outside or seeing the sun and yet she claimed she babysits two kids everyday.

Lisa claims the children she babysits are on the young side. She tends to forget their names and she just repeats like a loop that she has to get back home. Both Charles and April questioned if she might be in danger. They wondered if the reason she has to leave is because someone was waiting for her to come back and that person might be upset or take it out on her if she doesn’t show up at a certain time. Charles even came to suspect that Lisa might have been kidnapped. They secretly took a photo of her and they sent it to Chicago PD. It didn’t hit any matches an Charles figured out the reason why behind it. He showed Lisa an Ipad. She didn’t recognize or know how to use it. Those things have been out for ten years and so she might have been kidnapped as a child.

Lisa could be so conditioned that the only life she knows is with her kidnapper. Its why she was allowed to go to the hospital on her own and its why Charles and April needed to save her. They told Choi their thoughts. He didn’t want to hold onto her longer than necessary and so Charles warned him. He warned him that now wasn’t the time to be making mistakes. Choi has to run the hospital the right way and the right way was getting help for Lisa. Something Charles said must have gotten through because Choi later decided to help. He used an app on his phone that de-ages someone and he de-aged Lisa. Her photo was a match for missing girl named Kelly. Kelly disappeared years ago.

It had been all over the news. Charles remembered seeing her photo and he was the one who made the connection between Lisa and Kelly. They called 911. They asked for the police and April went to go make sure that Kelly didn’t walk off. The three of them were doing that as Manny grew to be jealous of a patient. The patient was a paramedic and she had a thing with Crockett a while back. It didn’t work out. The paramedic was getting married in a couple of weeks and Crockett was happy for her but seeing the two together had made Manning jealous and now she can’t stop herself from thinking about Maggie’s suggestion. And Manning’s telemedicine call was with a woman who was more lonely than ill.

That too made Manning question if she was truly happy on her own or if she would be happier with someone like Crockett. Her ex-fiancé Dr. Halstead wasn’t doing so great after his latest relationship blew up. He went looking for purpose and so he agreed to work with a new medical trial, but he pushes to the limit like he always does and it worked against him. He went too far in convincing a patient to join the medical trial. The patient agreed to do it and then his daughter came. His daughter didn’t want to trust a trial. She wanted her father to have surgery and Halstead ignored her. He told the surgeon to take his time. He later claimed because he wanted to see if the man’s condition would improve and it did. For a short time. He then got worse and they had to intubate him.

His daughter got so upset that she slapped Halstead. She also demanded that he be removed from her father’s case and so he made one last ditch plea to fix thing. He performed a risky procedure. It helped repair some of the damage on his patient’s heart and so he made up for his earlier mistakes. But once again it was a close call. Halstead really has to stop taking so many risks. He got away with it this time, but there’s no telling what will happen next time and he could end up with more than a slap from a distraught daughter. It’s also a good thing Choi wasn’t there to see it else he might have removed Halstead from the call all together. Choi was with “Lisa” who turned out to actually be Kelly Bissett.

She was kidnapped twelve years ago. She was probably both sexually and mentally abused. She was going to need all the help she could get. The first thing she had to do was to admit to her real name. It was tough for her because she had been conditioned not to reveal her name and so April was the one who finally got through to her. April thought she needed to be on the Covid-19 unit to make a difference only she was doing that already. It didn’t matter where she was – April was just good at her job. She helped Kelly. She reunited Kelly with her mother and she even received praise from Choi.

Later, Manning asked Crockett why he focuses on one-night stands and she told him why she thought he did it. He did it to keep everyone at arms’ length. Manning didn’t judge him for tell her what she thought. She just kissed his shoulder and walked away.