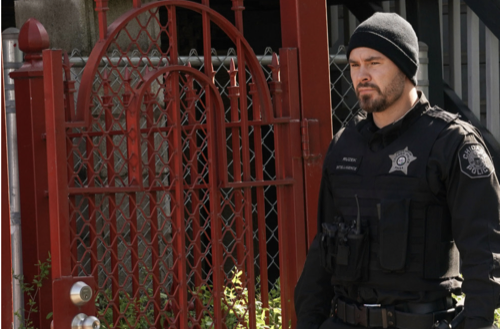 In tonight’s Chicago PD finale, the episode begins where we left off last time, where Burgess was attacked. The perpetrator is dragging her away from her car, she is kicking and screaming as much as she can. Ruzek is on the scene, he calls it in, he says his partner is missing and there is blood and signs of violence. Ruzek has a flashlight, he follows a trail of blood. He calls in again and says he wants the area blocked off. Voight radios him and he says Burgess is mossing, he needs everyone there right away.

Burgess’ vest is found, Voight says the good thing is there is not enough blood for her injuries to be major. Ruzek thinks Roy is involved. Voight says have Trudy initiate a plan four. Voight tells Atwater to collect all Burgess’ things, bag them and tag them.

We see Burgess, she is handcuffed, Kent is there and she says she knows he didn’t kill those girls, it was his boss Roy. She tells him that they can make it all fine. He reaches for his gun and she jumps him. He kicks her and slams her down on the concrete ground.

Upton says they got a hit on a car that was in the vicinity at the same time as Burgess, not sure if it is their guy but it worth a try. The car is registered to Myra Birkin, she is 92 years old and Upton is betting it is stolen. They grab traffic cam footage, they can’t make out in the video If it is Roy or Kent, but they see Burgess in the back seat hunched over.

Kent has Burgess in a warehouse, she says if he calls Roy he is going to kill her. He tells him that this is a line that he cannot cross, he is a decent person. He says he crossed the line a long time ago, and once you are really there, there is no going back even if you want to. Burgess tries again to escape and he kicks her on the back. Kent calls Roy, he tells him that he has a problem.

Atwater says the car was stolen, Myra didn’t even know. Voight tells the team they have to move smart, he wants them focusing on Roy and Kent, where the heck would they take her.

Roy arrives at the warehouse, he shoots Kent and he shoots Burgess, multiple times and she says, “no I have a daughter.”

At the station, they find the car close to Tim Grady’s house, he is believed to be Roy’s uncle. Halstead says he is working on a warrant, Voight says no, he is not wasting time.

They arrive at the house and bust over the door. Tim says Roy was there a few hours ago, he wanted to borrow his car, a 2005 Pontiac, silver. Atwater is not happy about them busting into the door and Ruzek putting a gun to the old man’s head to threaten him.

They find the Pontiac, which was recently dumped in the river, Ruzek does a search of it and nothing is inside. Meanwhile, Burgess is alive. Kent is dead, but she searches for him and finds his cell phone, but it was damaged. She takes off his belt and puts it around herself to secure the bullet wound.

The Pontiac is pulled out of the water, they find a phone inside. Then, we see Burgess, she is dragging herself across the floor to a door, where she sees light.

At the station, Ruzek is freaking out, he doesn’t want to waste time. Voight tells him that he is not helping, take a walk and get his head straight now.

Atwater goes to check on Ruzek, he says if they are going to find Burgess they have to do it right, they can’t be breaking down doors. Atwater reminds him of the law, he doesn’t get to change the rules because it is Burgess. The two get into a fist fight, they fall down on the floor and keep fighting until Halstead and Upton hear them and stop them. Upton says every minute they waste on this they are not focusing on Burgess.

Upton goes outside and finds Ruzek sitting on the ground, he tells her that he just wants her back. She says she gets it but they can’t act like a bunch of cowboys. She reminds him that if the worst-case scenario plays out, he needs to be there for Makayla, he is her guardian and he took the pledge. She says one wrong move and he could be out of a job or worse.

Burgess got herself out of the building, she is near a car, she picks up a brick and smashes the window while telling herself, “don’t die.” She drags herself inside the car and passes out.

The team narrows down a list of numbers that Roy has called in the past week, Voight and Ruzek are out knocking on doors and questioning people. Voight gets the information he wanted, a warehouse where Roy spends time. He goes inside, music is blaring a gun is o the table, Voight finds Roy. It’s just the two of them and Voight asks him where Burgess, Roy tells him to kiss his butt, Voight hits him.

Ruzek is frantic, Upton tells him to go be with Makayla, they will look for Burgess, she needs him.

Voight continues to hit Roy who won’t tell him anything while the rest of the team is at a loss. Upton tries to retrace Voight’s steps, she finds him with Roy.

Burgess is in the ER, Ruzek is with Makayla, Atwater calls him. Voight buries a grave for Ray’s body. Atwater tells Ruzek that she lost a lot of blood, but she is fighting. Upton arrives home, she tells Halstead that she doesn’t want to be without him, maybe they should get married.

Voight puts the body in the grave, pours gasoline over it, and burns it.