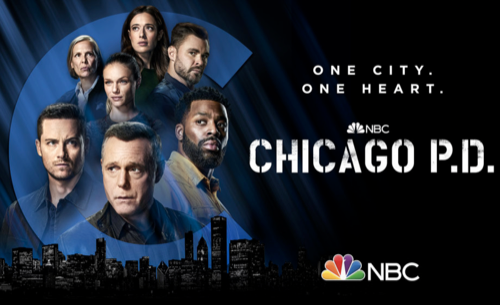 Voight and Upton deal with the aftermath of their decision; Ruzek struggles with the pressure of the situation.”

Chicago PD season 9 premiere begins tonight with Hailey Upton (Tracy Spiridakos) proposing to Jay Halstead (Jesse Lee Soffer) after killing a perp. She wants to start a better, new chapter with him. His phone is going off and they need to get to the hospital; she decides to take a shower, washing all the blood from that night off of her. Meanwhile, Sgt Hank Voight (Jason Beghe) is burning all the evidence and the body.

Adam Rusek (Patrick John Flueger) meets Kevin Atwater (LaRoyce Hawkins) at Chicago Med, where he learns that Kim Burgess *Marina Squerciati) is not out of surgery yet. Sgt Trudy Platt (Amy Morton) is also there. The surgeon finally comes out, saying Kim made it through surgery and is stable. Adam wants the best they can do and needs numbers.

He is extremely frustrated but is told they are doing the best they can. Samantha Miller (Nicole Ari Parker) arrives and Voight gives her an update but she tells him that she is pulling his team off this case as they are distracted. He insists they got this but she wants Roy arrested immediately. Trudy interrupted them saying shots were fired and Roy is on a camera nearby. Voight says they are staying on it as they are getting this prick; he allows Adam to stay with Kim.

Hailey questions Voight but he insists they are doing their job like any other day and begins banging indoors. They have Roy’s SUV, but there is no blood anywhere. Voight tells everyone to work the scene, including Hailey as they need her DNA in the garage. Kevin says nothing makes sense as Jay says the cameras led them there. Voight tells Kevin and Halstead to follow the evidence and Hailey will go with Voight to question the witnesses.

Adam is told by the doctor about Kim’s condition, he is worried about life support, hoping for the best since he has a kid to worry about. He appreciates him being straight about it when the doctor tells him that life support is a possibility.

The Unit meets with Trudy who brings up the name Mark Irwin, who was on the list of associates for trafficking girls. Jay explains that this is one of the guys who was helping bring the girls around and he met Roy when they were cellmates for 8 months. Hailey tried to say Irwin was on her list but Voight interrupted her saying he was on his list. Hailey pulls Voight aside and says they need to talk as she needs to know the plan because if they find the mark, they both go to jail so he needs to tell her everything.

Voight orders her to calm down, so unless she wants to confess she needs to accept what happened, no matter how bad it tastes. She nods and says she is good and walks away from Voight. A short time later, Voight continues the charade by kicking indoors with his team and looking through suspects’ things, acting like he is searching through things to find the perps. Kevin has the laptop with Voight’s fingerprints so Voight offers to take the laptop instead and Kevin agrees.

Trudy stays with Adam at the hospital while he frets about Mikalaya, who already lost one mother and can’t possibly lose another. He keeps lying to her, saying Kim is simply at work. Trudy thinks Adam will do what is best. He feels Mikayla is finally happy and finally protected so Trudy tells him there is no right or wrong answer here; there just isn’t one!

Voight meets with someone he knows who can do IT stuff and she is able to unlock anything he needs to see which includes a video of him and Hailey. He offers her money and she refuses, only suggesting that Voight stays safe. Voight calls Hailey who is with Jay as they spotted one of Mark’s cars. Voight informs her of a video on the laptop and it has been deleted, so if she finds Mark, she needs to take the phone and bag it herself.

She agrees; Jay is all about catching him after what he did to Burgess. As they begin to walk away they spot that Mark’s car is inside the garage and pursue him on foot. He manages to hijack another vehicle when Hailey slows down almost like she is allowing him to escape.

Jay informs Voight and Kevin that they locked down a 4 block radius and there is no way Mark can escape. Jay goes to look for Hailey finding her vomiting in an alley. He demands to know what is going on, she apologizes saying she is thinking about Kim, so he tells her that Voight is waiting for her out front. She gets in Voight’s car, as he reminds her that they cannot ignore leads and if there is a problem they will take care of it.

It looks like her guilt is eating her alive. Sam arrives on the scene and she shouts that she needs this to end, and they need to find Roy. Voight says he had the same noise in his head too when his son Justin was killed and he still has the noise, it just sounds normal now. Jay says they have a visual on Mark.

Kevin, Jay, Hailey, Voight, Sam are all racing to the scene. Mark has a weapon and has already fired shots towards the police and taken a hostage. Voight says they need to take the time for him to calm down and the only thing that matters now is saving the hostage’s life.

Sam orders everyone to do everything possible to end this with Mark alive as Voight wants the hydro cut and all cell phones jammed. He wants it to be physical communication. Sam disagrees, saying give him anything he wants as long as they save the woman. Voight tells Jay to get a line insight and if things seem like it’s going south and he has the chance to shoot, to take the shot; another innocent woman is NOT going to die because of this prick!

Voight and Hailey walk the stairs and as Hailey asks what they are going to do, Voight says they are going to save the woman. Kevin tells Sam exactly where Mark is as they aim their guns. Sam puts on her vest and encourages Kevin to go in with her, he feels it is a bad idea and she agrees but wants to do it anyway and he follows. Suddenly there is a bit of a shrill and it is the hostage when she sees Voight and Hailey. Hailey pleads that if Mark lets her go, she will tell the world everything; meanwhile, Kevin and Sam are already in the building walking up the stairs.

The woman squirms back and forth from Mark and a shot is fired, mark is shot in the neck; apparently from Jay. Kevin and Sam rush in, but not before Voight steals his cell phone. Hailey remains quiet as Sam pleads with Mark to tell her where Roy is.

Mikayla is painting Adam’s fingernails when he decides to tell her that Kim has been hurt at work and is in the hospital. He explains that it can be scary to see people hurt in the hospital but when Mikayla says she is her best friend and wants to see her, he agrees and tells her to get ready; unbeknownst to him, Mark is in the hospital as well. Adam learns from the doctor what is happening and takes Mikayla’s hand. Voight looks at Hailey as Sam looks so devastated.

Kim is awake and talking when she sees Mikayla, telling her how pretty she looks, She brought her favorite stuffed animal for Kim as Adam winks at her.

Outside the hospital, Sam chases after Voight who says that they have nothing for the last 6 hours on Mark and their best guess is Mark helped Roy get out of town before they caught wind of his involvement. She demands them to find the SOB. Voight says they have cases they can solve as Sam says she will call the FEDs and hopes they can help.

Hailey comes to see Kim in her hospital room, seeing how she feels. Kim learns they did not find Roy but they cannot discuss it because Kevin and Trudy enter the room. Hailey meets Voight in the parking garage and he tells her the case is done, Sam called the FEDs and his face will be placed on the wall but they will never see nor find a thing like it never happened and now she needs to make peace with something that will never happen. She promises to do her best. Voight is not sorry about any of it and she saved Kim, that has to be enough.

Hailey comes home to Jay, explaining her visit with Kim. The two share a drink as he wants to know why she proposed. She says she wants to be with him and wants them to have normalcy and stability, but he wants to be sure that it isn’t just about Kim. She isn’t sure but wants to know why that matters because she loves him and maybe that is what gave her the courage to tell him that. He says, “YES! I love you and he has known for years.” He gets down on one knee and asks her to marry him. She jokes that she already did the proposal part and he says he is old-fashioned. She accepts and they kiss.