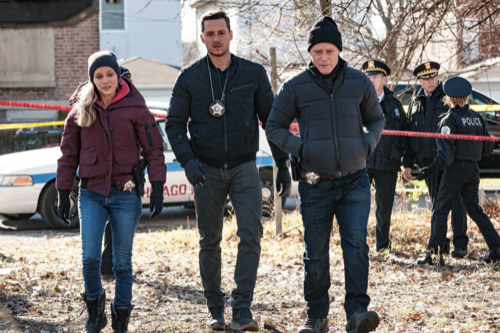 Tonight on NBC their drama Chicago PD returns with an all-new Wednesday, January 27, 2021, season 8 episode 4 called, “Unforgiven,” and we have your Chicago PD recap below. In tonight’s Chicago PD season 8 episode 4 as per the NBC synopsis, “A cop is murdered and suspicion falls on someone who has been holding a grudge against the officer. Intelligence works hard to solve the case but Dep. Supt. Samantha Miller is hesitant to defend him until she knows the whole story.”

In tonight’s Chicago PD episode Upton gets a call, her father had a heart attack, Halstead offers to go in the hospital with her but she says she wants to go alone. On their way, they get a call for a homicide, Upton tells him she is taking it, they are on patrol, she will go to the hospital later.

They are both checking out the guy who is dead, and Halstead finds a badge, he is a cop. The victim’s name is Mike Blaine, he has twenty two years as a cop. Two shots in the back, they found casings near the body, it was done about 11pm last night and there were no signs of a struggle. It seems like he was not on the clock, Voight tells them to do it by the numbers there is going to be a lot of heat on this one.

Halstead asks Upton about her dad, it was a heart attack but he is in stable condition. She still doesn’t want to go to the hospital, she tells him a cop just got shot, they should focus on that. Rodriguez, Blaine’s partner shows up at the scene. Voight tells him that this is a rough neighborhood, does he have any idea why Blaine would be here.

He says he has no idea. At the station, Burgess says tire marks near the victim indicates there was a small vehicle nearby and it collaborates with a witness who saw a compact vehicle speeding away. Atwater says he found some suspicious texts form Blaine’s phone to a burner phone two days ago. Blaine says, “you got it” and the burner phone says Wilson park 2pm. They pulled security footage from the park,

Blaine meets with a guy named Marco Perez who has a long sheet and there is hand exchange. So they have Blaine, on duty, receiving a suspicious envelope from a known banger that he arrested. Two days later Blaine is shot. Narcotics send them a message, Marco has a stash house, they give them the address. Voight says let’s roll. Voight tells Ruzek that until they know more he wants to keep the video quiet.

At the stash house, Voight and the team are moving in. It is a warehouse type of building, they head upstairs where they hear voices. They find Marco and some other men, but are able to take them down without any shots fired.

Voight interrogates Marco and his gun, Voight tells him the slugs are match in a cop murder. He shows Marco a photo of him speaking to Blaine. Marco says he didn’t kill him. He say the last time he saw him was that day. Voight wants to know what was in the envelope, he says three grand, he needed money to help out a friend. He says when he drove away, some white guy showed up and started taking pictures of him with his phone, Blaine lost it and started screaming. He says the man was white, in his twenties and drove a small car. That’s all he knows.

The found the kid in the small car, it is Zac Phillips he filed an excessive force complaint against Blaine a few weeks ago. He is 25, owns a designer firm. Two days after a bust that Zac was involved in, he started posting on an anti-police website, goes by the name FTPNOW, they have him saying, “propaganda must end, if CPD doesn’t punish officer Blaine, perhaps someone else will. Remember Mike, Karma is a bitch.”

In interrogation, Upton asks Zac where he was the night before. He says he was at his girlfriend’s apartment. She shows him a photo, caught on a traffic cam, four blocks from where Blaine was shot. He says he was bullied by Blaine, but he didn’t shoot anyone. Ruzek tells Voight that Zac’s apartment is pretty clean, but he had pictures of Blaine the night before he was killed, he was definitely stalking him. Voight says it doesn’t mean that he killed him.

Ruzek says a digital footprint puts Blaine at South Bishop Street at 9pm, a high crime area, drugs and hookers. Blaine waits by his car, an unnamed hooker shows up and they say hello. He then slips her an envelope and he is guessing it is the one he got from Marco. She gets into his car, they stay there for ten minutes before she exits. They can’t ID the woman, there is not enough for facial recognition. Voight tells him to show the photos to his partner, maybe he can help.

Voight has a visitor, it is Blaine’s wife, she is getting the run around from her husband’s district. She is told that because he may have been off book that the city won’t pay for full pension. She says his kids need to know that he died a hero and they need the benefits, they are low on cash.

Platt tells Voight that IAD is looking into Blaine’s murder, rather than sending him off with a salute and a pension, they are going to send him off dirty.

Halstead asks Upton about her father, she shrugs it off again like it’s not important. He tells her that he knows who her dad is, but if she does this and something happens to him, she is going to carry that for the rest of her life.

Voight tells Upton to go back, speak to Zac one more time and see if she can get him to open up. She meets him with Halstead. He admits that he was taking pictures, he wanted to prove that he was a bad cop. Upton tells him that he is the only suspect, and this his opportunity to tell them what happened. Zac says he hated cops before Blaine and he has no intention of helping them with their case.

Upton and Halstead drive Zac home. Upton gets a call, a witness called in. They head to meet the person and nobody shows up but Upton finds a gun. Later, the find out that the gun is the one that killed Blaine. The traced the weapon to Maria Guera, a female Hispanic with no priors, and she is the woman in the photo with Blaine. Voight tells them to track her down.

They track her car, and knock on a door. The woman who answers says she is not there. All of a sudden, Atwater sees a woman running and goes after her. They find her in a garage, she has a knife in her hand, Atwater tells her to put it down. She drops it. Ruzek handcuffs her and tells her they are taking her to the station regarding Blaine’s murder, she says she would never hurt him, he saved her life.

In the interrogation room, Maria that if she tells them the truth they have to protect her and her family, from her boyfriend Jose Torres. He took he gun and killed Blaine who was trying to help her. She broke up with Jose a month ago, he was angry and showed up at her house, wanted to have sex. She called 911, Blaine showed up, and calmed the situation down, she didn’t want to press charges. A few days ago, Jose found her at his cousins, she told him to get out and he started punching things. She pulled out her gun, he grabbed it. She called Blaine, he showed up with some money, told her to stay in a hotel for a few weeks, he was going to speak to Jose. She didn’t go to the police, Jose said if she ever did, Jose said he would kill her daughter.

Voight tells the team that they have to find a way to nail Jose Torres. Upton and Halstead go back to see Zac, they say they know that he didn’t kill Blaine they just want him to look at some photos. Then a black Audi shows up and starts shooting. Zac thanks Upton and Halstead for saving his life.

Zac is back in interrogation, he says he refuses to answer. Upton says the offender saw him on the news and knows he is a witness and now a target. Halstead reminds Zac that Upton saved his life, she is not an evil cop. She tells him to quit hating for Blaine’s family, give him justice. Upton tells him that Blaine was trying to save Maria. Halstead tells him to accept the fact that Blaine made a mistake. Zac says Blaine was violent and unforgivable.

Zurek tells Voight they found the Audi, broken glass and blood inside. Upton and Halstead find Torres, Halstead gets out of the car to go get him. Upton sees that Torres has a gun, she comes around and pulls a gun on Torres, he grabs a witness, but Halstead is able to free her and arrest Torres.

Ruzek tells Voight that he got some footage from a security camera of Torres dropping the gun in the alley after the murder.

Voight fights to get Blaine be seen as a hero, he gave his life to do something good and noble. Meanwhile, Halstead and Upton tell Maria that she is safe, she just has to testify but he is in jail. Upton gets a call, doctors are worried about her dad and moving up the surgery, she tells Halstead she is going to the hospital.

Upton goes to the hospital, but decides not to go in her father’s room. She tells Halstead it went good and she is glad that she talked to him.