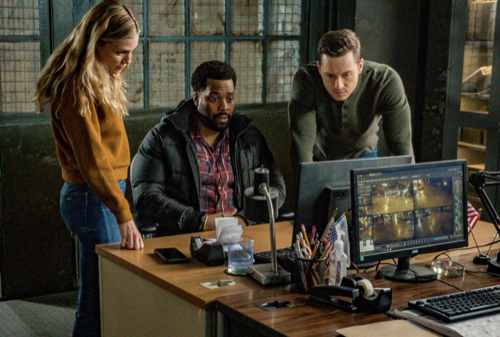 Tonight on NBC their drama Chicago PD returns with an all-new Wednesday, February 10, 2021, season 8 episode 6 called, “Equal Justice,” and we have your Chicago PD recap below. In tonight’s Chicago PD season 8 episode 6 as per the NBC synopsis, “After a seemingly innocent young man is gunned down in the street, the team works to bring in the suspected culprit, but the case is more complex than it appears; the grief-stricken father is determined to do his own undercover work.”

In tonight’s episode Ruzek and Burgess are in one car, Halstead and Upton in another, they are on a stakeout. Ruzek sees a dark Impala. Halstead says his CI guy said one of Dante’s guys is going to park the car, another associate is going to pick up the car and drive off. Burgess sees a guy out there videotaping the driver. They proceed to follow the car, Burgess stays in the vehicle when they arrive at a warehouse and everyone else goes inside. Inside, there is a man who says this is not what they think. It’s a murder case, the victim’s name is Shawn Wade and he tells them to check with homicide, he is Shawn’s father and he just wants to find out who killed his son.

Back at the station, in the interview room, Shawn’s father says his son was killed at the corner of 85th and Wabash back on July 5th and nothing has been done about it. He says his son wasn’t in any gang, he was a good kid, the cops did nothing about it. He says black kids lying in the street, they do nothing about it. Halstead tells him right now he is having a hard time connecting his son being killed with his running dope for Dante Richard who is the biggest heroin dealer on the south side.

Shawn’s father says he is just trying to play along with the gang bangers to find out who killed his son. He gives Halstead his intel about the gang, he got in to find his son’s killer, and he will do whatever he has to do to find his kid’s killer. He says his son still visits him and tells him not to let him die in vain. Voight and Upton are watching, she tells him that it sounds credible. Voight tells her to use his information to take down Dante.

Voight and Halstead are with Wade, Voight tells him they looked into his case and he believes he wants to find his son’s murderer. But the fact is, he committed a crime. Voight tells him that he doesn’t have to do a day, they want him to work with them as a cooperative defendant. Voight shows Wade photos of other people who were killed by heroin mixed with fentanyl, he wants him to help take down Wade, and there is a pretty good chance they can find Shawn’s killer too. Wade gives in, he says he will help.

Wade makes an introduction to Dante. Wade notices the silver Lexus that Dante drove up in, it is the same kind of car that was seen when his son was killed. Halstead is undercover, Wade ruins it by paying too much attention to the vehicle, and Dante leaves, but says to Wade if he sees him again he is going to kill him.

Halstead ran the plates, the silver Lexus belongs to Dante, he paid cash with it. Halstead says Dante is a major player with the prophets, before he starting pushing heroin he was an enforcer down in Inglewood, he is a person of interest in three unsolved murders. Halstead says no matter how they get him, they just need to get him off the street. So if they take him down for Shawn’s murder, he goes away and Wade can put this behind him.

Halstead tells Wade they need to know the truth about Shawn, they think he was involved with Dante and that is why he got himself killed. Halstead tells him that his son was a registered gang member. Halstead and Upton ask more questions and say they are not there to judge, just to help. Wade says there was something, one night when he was cleaning up he found an envelope with cash. Halstead asks if it is possible his son was dealing drugs and he just doesn’t know, he says no.

At the station, the team tells Voight that from Shawn’s cell phone records he spent a lot of time in Inglewood, it looks like he was working with Dante. Voight asks who is running the area now, Ruzek says a guy named Travis, he has been in Dante’s group for about three years now. Halstead and Upton go to talk to Travis. Halstead tells him that they are going to forget the dope and the wad of cash if he tells them what they want to know.

They show him a picture of Shawn, Travis points to across the street at a market, he says he was no banger. They go to the market and find out that Shawn worked there for a few months part-time, and Shawn got paid cash every two weeks. Florence Clay, who works at the store said that Shawn went out with Erika Moore, he didn’t want her to get rained on. He ran with an umbrella to assist her, he liked her, but she had a boyfriend and he was in a gang.

She says she told the police all of this the night of the murder and said someone would call her, they never did. Halstead and Upton go see Gil and tell him that he had a lead of a witness to Shawn’s murder and he never followed up. Gil tells him to back off, he has a filing cabinet full of cases like that, the gang cases are low priority, the bosses get what they want.

Halstead and Upton knock on Erika Moore’s door, her mother says she is not there. They see a smashed lamp on the floor and go in, they see she has a bruise on her face. She says a man came over looking for Erika, he hit her and got upset. She hasn’t seen Erika in a few days. Upton shows her a picture of Dante and she starts crying saying she doesn’t want any trouble.

Voight and Ryzek go to speak to Dante and mentions Erika Moore’s name. Dante says he doesn’t know who that it. Voight reminds Dante that seven months ago, he got out of his Lexus and shot a man coming out of the market with Erika Moore. Voight gets a call, they found Erika Moore and are bringing her in, he tells Dante it is good news.

Upton and Halstead and interviewing Erika, ask her to tell them what happened the night he got shot. She says she heard gunshots but didn’t see anything. Halstead tells her they can protect her. She says it is not about that, she is on probation and she is not talking. Halstead tells her that’s she owes it to Shawn and to his father. Erika says he is gone, and she is not going to ruin her life or her mother’s life, she is not talking. Meanwhile, Dante’s alibi checks out, he couldn’t have killed Shawn Wade.

Ruzek found something, some texts on Erika’s phone just before he was shot and they were with Kayvon Maclaine, one of Dante’s unders. Voight says all they have to do now is prove it. Wade shows up at the station, he says he went by Dante’s house, and they need to arrest him. Halstead says he has an alibi for the night of the murder, but now they know who did. Halstead tells him that they think Shawn was killed because of a girl he was working with, he was saving up the money to buy him an air conditioning unit. Furthermore, they are close to solving it, they need more evidence and they are going to get there, he promises him. Wade says thanks.

Ruzek and Atwater impound Dante’s vehicle, they find blood in the car. Voight tells them to get Kayvon’s address, they all head there. When they arrive they hear shots fired and all move incautiously. They find a man down, it is Kayvon. Then they see a runner, Halstead tries to catch him but he gets away. Kayvon is dead. Voight tells the crew that they are going to assume that Dante is behind this, he wants them to track his inner circle.

Atwater is looking at a traffic cam, they call in Dante and show the video to him. Dante swears he didn’t kill Kayvon. Burgess shows Voight the video, they can’t see the plates, but they can see that it is a Camaro. Voight tells them that they need to connect Dante to that car.

Halstead goes to the garage where Wade works and sees a dark Camaro. He then goes to see Voight and tells him that Wade killed Kayvon, he saw something in the surveillance video, an estimate from a garage on the dash. He then went to the garage and saw the same vehicle in the parking lot. Voight asks him how Wade would now, he says he told Wade that Shawn was killed because of a girl, he can only think

that he went to the market and got his information. Halstead says Wade is a good guy, he couldn’t let it go, he just wanted to have closure. Voight tells him that it is his call, he it the only that saw the estimate on the dash of the car.

Hastead goes to see Wade, he tells him that he reminds him of his dad. He wasn’t much for praise or compliments, but he wanted them to succeed more than anything. Halstead asks Wade what he did with the gun, he says he doesn’t know what he is talking about. Halstead says he knows what happened and he knows what he did. Wade says he tossed it in the river. Halstead all they have is the Camaro leaving the scene, he should keep his mouth shut and ask for a lawyer. Halstead takes Wade out in handcuffs.