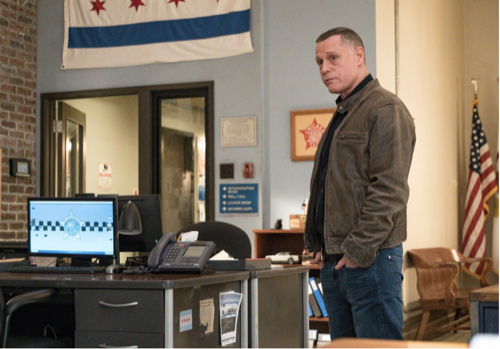 Tonight on NBC their drama Chicago PD returns with an all-new Wednesday, February 17, 2021, season 8 episode 7 called, “Instinct,” and we have your Chicago PD recap below. In tonight’s Chicago PD season 8 episode 7 as per the NBC synopsis, “After a seemingly innocent young man is gunned down in the street, the team works to bring in the suspected culprit, but the case is more complex than it appears; the grief-stricken father is determined to do his own undercover work.”

Atwater and Burgess are in the back of the truck together, they are listening in while Ruzek and Halstead are undercover. They hand over some drugs for money and a silver pickup drives by and shoots at them. Halstead and Atwater jump out of the van, the cops are all ok, the two men two sellers are dead. Nineteen casings too far, the guys are two well-known meth dealers, Voight is there and he tells the team to find out if they had any beefs with anyone. Whoever did this could have taken two out of their own.

At the precinct, Halstead traced the seller’s phone and there was a text, “you sell you die.” The text was sent from burner to burner. Ruzek knows a meth dealer, Tommy, he and Halstead go to speak to him to see if he knows anything about the two guys who got shot. Ruzek tells him that he needs him back in play, he gives him a deal to have his record sealed and give him five thousand dollars. He tells Ruzek he really wants Logan, he is a player out there and will take them where they want to go. They meet with Logan and he tells them that since the Postera brothers were shot there is a new sheriff in town, Monahan. Logan says he will get in touch with Monahan, get the ball rolling. Tommy takes a joint from Logan. Afterward, Ruzek tells Tommy, if he wants his money, no dope.

Halstead updates the team that they think Monahan was the shooter. They have linked Monahan to ten murders but he knows how to hide a body and slips away every time.

Voight tells them to keep going. Ruzek goes to see Tommy and he is not home, he is on a binge again. Ruzek tells his wife he is going to find him, and he does. Halstead tells Tommy off and in his defense, he says he is keeping clean. Ruzek brings him into the station, Voight asks Ruzek and Burgess if they can do it with him, Ruzek says yes, Burgess says no.

There is another killing, Ramone Santiago shot by an automatic rifle, his girlfriend as well. Voight tells them to find out of the rifle was used in the Pontera killings. Ruzek tells Voight that he knows Tommy is a mess, but he is the best CI that he has and they don’t have much choice right now or they are going to be dead in the water. Voight says he thinks he is right and tells him to get it done.

Ruzek is with Tommy and Logan. Tommy is shaking and Logan tells him he is dried up, he should smoke up. Then he turns to Ruzek and tells him to smoke up and when he says no, Logan pulls a gun on him. Ruzek jumps in and Logan, Burgess, and Atwater jump out of the van to help out.

Voight tells Ruzek that someone had a camera outside a store where this went down and they are saying police brutality. Ruzek tells him that he felt his life was in jeopardy. Voight explains that it is all about perception and this is not the same world we live in anymore.

Ruzek is in the interrogation room with Logan, he tells him to give him Monahan’s location and he will get him a good deal. Ruzek sets up the meeting with Monahan and wants to bring Tommy with him. Burges tells him that he is making a mistake. Ruzek goes to see Tommy and he is coming down off the drugs and having a hard time. Ruzek cleans him up, Tommy says he is not going to make it. Ruzek leaves with Tommy in the truck with him to meet Monahan.

They make another plan for a buy and the team is backing up Ruzek and Tommy. When they arrive, they are checked for weapons and head inside a warehouse. Monahan tells them to keep it simple so they can do a deal today, he gives Ruzek a bag of dope and when the rest of the team get the cue they go in. Monahan ends up having a gun on Tommy, Ruzek has a gun on Monahan. Monahan shoots Tommy and Ruzek shoots Monahan.