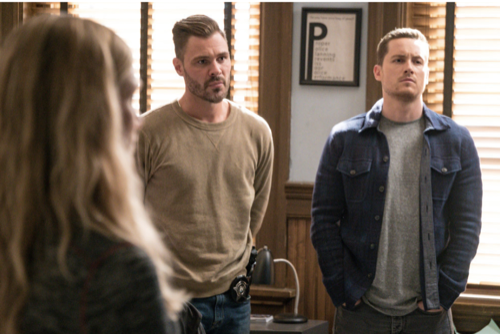 Tonight on NBC their drama Chicago PD returns with an all-new Wednesday, March 10, 2021, season 8 episode 8 called, “Protect and Serve” and we have your Chicago PD recap below. In tonight’s Chicago PD season 8 episode 8 as per the NBC synopsis, “Ruzek and Atwater are tasked with making an arrest after a high-profile shooting; the situation becomes complicated when it’s clear someone doesn’t want them to make it back to the station.”

In tonight’s Chicago PD episode, we see members of SPD called in and asked questions, one by one. How do they take their coffee, if they use racial slurs, have anger issues, trauma, how they feel about their team, PTSD, have they ever killed someone, etc.

Ruzek tells Atwater that he doesn’t understand what they are going to get from all those questions, they can look at his police record to see if he is a good or bad cop. Ruzek thinks it is a little overzealous. Burgess calls them over to her computer, an officer-involved in a shooting, a bad one. A buddy of Halstead on patrol sent over a civilian witness video, somebody caught it on their cell phone. They all watch the video, Upton looks horrified, the cop shot the kid, his name was Jeff Duncan, zero priors and legal fun in his waistband.

He was pulled over for going seven over the speed limit. The cop who fired the shot, his name is Dave Wheelan, was with a cop who is a month out of the academy, Andre Cooper. Jeff never went for his weapon and they have three witnesses and two pod cameras. Voight is asked to have two of his officers go pick up Wheelan. The video is not yet viral, but they are expecting mass protests, so they need to move fast. Ruzek and Atwater are told to go to Wheelan’s home and arrest him for murder. Voight tells Ruzek and Atwater to read his rights and say nothing at all. Ruzek looks at the file and he says it makes him look like a good cop who murdered a kid at a routine traffic stop.

Atwater and Ruzek show up at Wheelan’s house, the story leaked and there are people all around. They knock on the door and Mrs. Wheelan lets them in. He comes downstairs and is arrested inside. Wheelan asks to be cuffed outside, Atwater says no, he cuffs him inside. Outside the house, people have already gathered and are angry, Wheelan is shouting that he did nothing wrong and he would do it again.

Upton calls RUzek, tells him that there is a video that they didn’t know about, Jeff Duncan had an app on his phone that recorded the traffic stop, it sent a full video to all of his emergency contacts, it’s gone viral. They have unruly crowds at headquarters, city hall, the jail and south detention, and death threats against Wheelan. They need to bring him to a safehouse.

They arrive at the safehouse and Wheelan says he did nothing wrong, the video speaks to himself. Ruzek tells him to stay quiet, Wheelan tells them to watch the video. They watch the video, and Wheelan is clearly wrong. Atwater hears a noise outside and hits the floor, shouts get down. Bullets are flying everywhere. They manage to get out and back in the SUV, but not without getting shot at again.

Ruzek calls it in, he tells the crew that someone hit the safe house, they hit one of the shooters, there were maybe two of them. Atwater tells Ruzek that this could possibly be an inside job, they should keep this between him and take him off-book. Ruzek calls Voight and says they don’t need an escort, they have a plan.

The second shooter is hurt and he is on foot. Miller is with Voight, she asks him if there are any injuries with his men, he says no and they are transferring Wheelan off-book. She says she is not giving any orders, it is his call.

Wheelan tells Atwater to take his cuffs off, he is not the criminal here. Atwater is getting upset, he tells Wheelan that he watched the video and he murdered the kid, how can he ask him to let it go. Wheelan then tells Ruzek to uncuff him, he won’t and tells Wheelan to sit down.

They have the fingerprint on the dead shooter, his name is Ray Max and he was twenty-five. He is mixed up with a gang called the Rolling Reapers, his boss is TJ Jones, Jeff Duncan’s half-brother and they think of themselves as the police of gangland. Voight and Halstead head out to speak to TJ. Tk says his brother was killed by police and he won’t talk to them without a witness and they have nothing to arrest him on.

Upton shows a picture of Ray, tells TJ that he is dead and they are looking for the second man. TJ says he doesn’t know. Voight tells TJ that the cop was being brought in for murder, they were doing it right. TJ says that he shot no one, he doesn’t even own a gun and they have nothing on him, he wants to go. Voight lets him go but puts a tracker on him.

Ruzek tells Wheelan they can’t leave until they find the second shooter and Atwater is getting more and more agitated when Wheelan continues to say he did his job. Halstead got a video of a silver SUV that was parked two blocks away from Wheelan’s house, then the safehouse. The car is registered to Antoinette Clark. They head over to her house, she tells them that they can’t go in if they don’t have a warrant. Halstead says if he is still bleeding he could die, she lets them in and he is on the couch full of blood.

Wheelan is still saying that he did his job, Atwater is trying to block him out, Ruzek tells him to stay calm. Atwater tells Ruzek to stop hiding behind being white. Atwater says he is angry and Ruzek isn’t because he is the good white cop. Ruzek is upset, he says why does he have to answer for this man. Wheelan says he feared for his life. Wheelan says it had nothing to do with race, he feared for his life. Atwater shows Wheelan the video again. Wheelan says that is not the video, his hand moved for his video, he tells Atwater that he altered it.

They get the all-clear, they have the second shooter, and can bring Wheelan in. Voight calls Ruzek and Atwater, there is another shooter, there was a tracker on their SUV. Bullets start firing, they take cover. Wheelan tells them to take his cuffs off, he is not going to die like this, but they won’t and Ruzek tells him to stop talking. They can see the shooter, Atwater tells him to drop the weapon. Wheelan finally admits he was scared and he says, I murdered that kid didn’t I. All of a sudden, Wheelan comes forward and says here I am and he is shot multiple times. Atwater tries to get him back, Voight is now there and tells him that he is gone and it’s ok, he did his job.

Voight, Ruzek, and Atwater are sitting down in the bar and having a drink together. He tells them that Wheelan did find when he was questioned like the rest of them, so how do you stop something that you can’t see coming. Voight tells them they did good, and leaves.