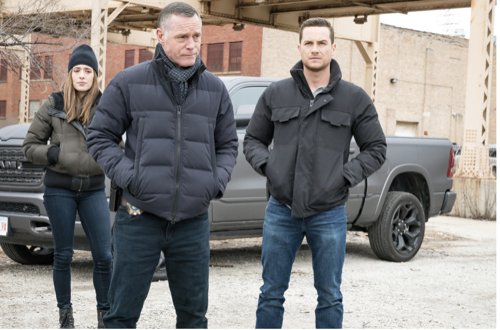 Tonight on NBC their drama Chicago PD returns with an all-new Wednesday, March 17, 2021, season 8 episode 9 called, “Impossible Dream” and we have your Chicago PD recap below. In tonight’s Chicago PD season 8 episode 9 as per the NBC synopsis, “When a local business owner is gunned down in his shop, it becomes personal for Atwater, who patrolled the neighborhood as a young cop.

In tonight’s Chicago PD episode, the episode begins with Ruzek and Atwater, they respond to a call at a paint store and they find one down, with a gun wound to the chest. Ruzek sees someone run out the back door and runs after him. he chases him through alleyways and streets, the guy has a mask on and when a school bus passes, Ruzek loses him. The deceased, Mr. Inglewood, was Atwater’s first beat, he says he cared about his job, his family, and his community.

The register was cleared out but he still had his wallet on him. He was beaten and shot at close range. No security cameras inside and the guy had a mask on. Voight tells the team to give the man the justice he deserves, starts looking around to find something to find the guy who did this.

CPD Miller tells Voight that they want him to take Cooper, the man whose partner was shot and killed, on in Intelligence. She would consider it a personal favor. Cooper then speaks to Voight and says he knew nothing about it and he doesn’t want any special favors. He says if Miller puts him in an awkward position, he apologizes. Cooper says he wants to make a difference, do some good.

Voight tells him it was nice speaking to him. Cooper gives him a heads up about a suspect that he saw at the pizza joint on the corner. Atwater and Burgess head over to the pizza shop. The man says he saw nothing, he was in the back. Atwater tells him that he is not going to sleep until he finds his friend’s killer. The man says he is no hero, he has a wife and two little kids.

At the office, Atwater says Quincy Baird runs the neighborhood, he is a lone wolf. Nobody is speaking. They checked Inglewood’s phone, he was getting threatening text messages. Halstead says a witness told him that they saw a beige SUV patrolling the block for about twenty minutes before the shooting with tinted windows. Burgess has some pod footage, an escalade registered to Quincy Baird is being cleaned out. Voight tells them to get that escalade and if there is blood in there it is game over.

Halstead and Burgess are at Quincy Baird’s house, he says someone stole his SUV and he was just about to report it. Quincy tells them his lawyer is calling and he is keeping his mouth shut. Atwater then sees a man exiting the building with a red backpack, they run after him. The man’s name is Damari Evans and they do catch up with him, but they have nothing to hold him on and the backpack was empty, Evans says he was visiting his brother in the hospital at the time of Inglewood’s shooting.

His alibi checks out. He has been in a gang since he was fifteen and he lives with his brother Theo. They come up with a plan to go undercover as a drug dealer, but they are all burned. Voight comes up with an idea, use Cooper to go undercover and catch Demari, then if they get him on something, he will give up Quincy to get off.

Cooper is in the station, he is talking to Atwater who gives him some advice. Then, Cooper is with Damari, he tells him about his mom having cancer and going for chemo. Damari takes him out of the room, but then his brother Theo has an attack and they both run back into the living room. Cooper wants to call an ambulance and Damari doesn’t want to, he a product in the house. He gives his brother some medicine and he comes back. Theo is good. Damari tells Cooper they will talk more business tomorrow. Cooper says goodbye.

Back in the station, Atwater gets a call from the guy at the pizza joint, Quincy is patrolling the area right now. Halstead and Upton find a young boy in there, his name is Tre and he came in to get some pizza. In the bag, the pizza guy is dead, the cash register is not touched. Voight tells the team that they need some evidence and get some boots on the ground. Cooper asks Voight if they will give Damari a deal, what if he does time, what will happen to Theo. Voight tells Cooper their focus is to take down Quincy, that is the job.

Cooper meets with Damari, he got him 100 grams, Cooper says he got the money. Damari gets a call, Theo had another seizure, the principal took him down to the ER. He spent thirteen thousand last year on medical bills, that is why he sells dope. Cooper tells him to go to the ER to see Theo they can do the deal later that night. Ruzek and Atwater are listening in and want to know what that was.

Cooper says it didn’t feel right, they will make the deal that night. Atwater tells him to stop thinking about Damari and think about those two dead bodies. If this is something he can’t do, then step aside because they have a job to do and they need to get it done.

Atwater goes to see Voight and he tells him that Cooper is starting to worry him. Burgess says they have Quincy, 20 minutes after one of the murders meet Damari at a quickie mart and give him the murder weapon, his job must have been either to stash it or dump it.

Cooper meets with Damari again, who makes him dinner. Voight thinks Damari is getting suspicious because of the way that Damari is acting. Cooper asks to use the bathroom and instead goes into Damari’s bedroom and starts to look around. He finds his cell phone and Damari finds him. Damari gets a call, he tells Cooper to get his coat they are going to bounce and meet Quincy. Damari then asks Cooper if he doesn’t trust him, and he tells him no cell phones. Voight tells the team they have no choice but to let Cooper go mobile with Damari.

A garbage truck gets in the way and they are losing Cooper, Atwater says the kid is on his own. It takes them a while, but they find the vehicle. Meanwhile, Cooper and Damari are out of the car, in a warehouse of sorts to meet with Quincy who is very suspicious of Cooper and tells him that he doesn’t believe in serendipity. Quincy pulls a gun on Cooper, Damari puts himself in front of Cooper, and Quincy shoots. Cooper calls for an ambulance and tries to save Damari. The team runs in and they get Quincy, Damari looks up at Cooper and says, you’re a cop.

Cooper is seen washing his hands and Atwater comes in and tells him that Damari is dead and he signed up for that life. Cooper asks him if he is going to preach to him. Cooper says he gets it, but he thinks he could have done better, there has to be a way to do this to save innocent black lives. Atwater reminds him of the other two innocent black lives that were taken.