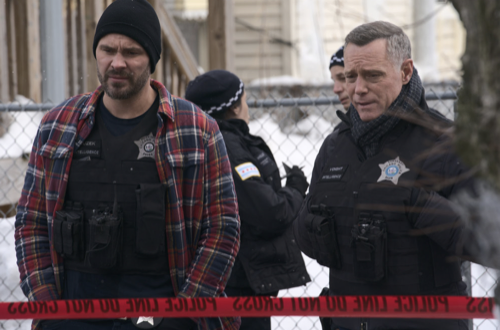 In tonight’s Chicago PD episode, the episode begins with Ruzek and he is with Disco Bob, they head to a bar and Ruzek gives a deposit for his retirement party. Back at the station, Platt tells Ruzek that she heard about the party, he says it is this weekend and no obligation. She says she doesn’t go to parties like that. Voight walks in and gives Ruzek a bottle for his old man, he tells him for his thirty years of service.

Burgess and Ruzek are on the road, he stops at his dad’s quick, he tells her to come in and say hi. Ruzek goes in and finds the TV on, a chair turned over, some blood on the kitchen floor and his dad is not there. Ruzek makes a call to his dad’s cell phone and finds it in the snow. There is more blood outside, Burgess tells him the blood is fresh. The neighbor tells Ruzek that she witnessed two Hispanic men come into the house and they left twenty minutes ago.

Burgess tells him to call it in. Ruzek tells her that his dad made some pretty crappy choices over the years, this could be connected. Ruzek calls it in as a possible home invasion, possible kidnapping. Atwater is on the scene, he tells Ruzek they are going to figure it out. Ruzek finds something on his father’s phone, he got a text that says if you don’t deliver, it’s over. The footprints look like they came from someone in socks, so they believe he was kidnapped and they didn’t even let him put his shoes on.

Ruzek heads to a bowling alley, he goes to see Benny at the back and points a gun to his head. The guy tells him to take a breath, he will tell him what happened. He tells him that his dad was in trouble, he is the worst gambler. He got in a hole that just got deeper, he was in for eighty grand. He didn’t lay a finger on his father, he paid the whole thing in cash, a month ago and he hasn’t seen him since. Ruzek apologizes. Burgess is outside, she followed Ruzek.

He tells her about his father paying the debt. Ruzek gets a call from a restricted number, it is a video of his dad and he looks in bad shape. He says he is alright, he says he was taken by Los Tiranos and he doesn’t have to tell him who they are. They got a problem, a snitch on the inside. They need Ruzek to find out who it is when he gives them the name or he is gone for good.

Voight says he’s got a cop missing twelve hours, he wants good news. Upton says they have reason to believe these guys know what they are talking about, the last couple of months they have had some hits. They think there has to be an informer on the inside. They found DNA at the site of the incident and some belonged to Disco Bob, but some more belonged to one of Los Tiranos’ gang members, Hector, and they head there.

Inside the house, Hector and his partner, Ilana are on a bed, the man appears to be just about dead, he is full of blood. Ruzek jumps on him and starts doing chest compressions while he shouts where is my dad, but the guy dies. Ilana is a nurse, but Hector begged her not to take him to the hospital. Ruzek asks her if she knew Hector was in a gang, she didn’t and she calls Ruzek a liar.

Burgess calls Ruzek out of the room, she found something. Three days ago, at the end of his shift, his dad logged into the gang database and accessed the list of documented members of Los Tiranos. He doesn’t work for gangs, he doesn’t work major crimes, there is no reason why he would need that information.

Once he has the names, he uses them to pull the field reports for the recent operations targeting the gang and one of those reports mentions a CI that goes by the name of Merlin. He doesn’t know who Merlin is, but it is not for lack of trying. He is a patrol cop and doesn’t have the security clearance.
Ruzek gets another video, he says times up, they have to do this, or not.

Ruzek goes to see Voight, he tells him about the second video and says they put a clock on it, by noon tomorrow. And there is more, his father has been doing favors for this gang, he was trying to find the snitch called Merlin. Voight says his father thinks that he can do what he couldn’t. Ruzek says he got further but Merlin is indexed in about twenty cases, Merlin is good. Voight says if they give up Merlin he is dead, but he plans on finding out who he is, get his father, without doing the trade – they are not in the business of singing execution papers.

Merlin is a young woman, if she is given up they lose two years of work. Lucas Borello wants Merlin dead, he is Hector’s cousin, so the team thinks that maybe he has Disco Bob. If they get Borello, they might get Disco Bob and not have to reveal who Merlin is. Ruzek remembers that Ilana used to drop Hector off at the warehouse to work, they check out the property and has Borello’s parent’s name on it.

The team head to the warehouse, Ruzek finds his dad alive and takes his coat off to put around him because it is cold in the room. Lucas Borello notices the team and starts to run, he sees a woman stopped in a car outside the warehouse, he throws her out of it and gets away.

Disco Bob is in the hospital, he has two broken ribs, some hypothermia but he will be fine. Ruzek goes in to see him and bring him some clean clothes. He closes the door and tells his dad that it is true time. His father says back in the day he was the man, Borella was a street rat. He owed him money and that is when he demanded that he get him the name of the snitch. He says he fought Hector pretty bad, but Borella put a gun to his head. To save himself, he sold out his own son. He told him that he was a cop, a better one than him, and could find out the name of that snitch. Ruzek wants to know where Borella is and his father says no, he has to let this go.

This can’t get out, he will lose his pension and soil the family name. Ruzek goes to see Voight and asks him what it will do if they bring in Borella, his dad will lose his pension and his name will be soiled. Voight says he is not doing this for his dad, he is bringing in Borella and doing things right. They get a lead where they mind find Borella is, Ruzek is upset, he says his father is a jackass, but he is right about one thing, everyone would be better off if Lucas Borella just went away. They arrive at a house, shots are fired, Ruzek is at the back of the house, Burgess runs back there and finds Lucas Borella shot dead on the ground. Ruzek calls it in and walks away, Burgess asks him what he did. They have a video of the shooting, it was a good shoot, Voight tells Ruzek he did what he would have.

In the end, because Luca Borella is dead, Ruzek’s dad gets his retirement party and gets to keep his pension, Voight makes sure of it. Later, Ruzek gets a knock at the door, it is Burgess and she tells him that they need to clear the air. He tells her that he fell in love with her because she believed in him like nobody else has, and now he is not so sure anymore. After everything that they have been through, she shouldn’t have doubted him. He tells her she doesn’t know his heart, he thanks her for stopping by and closes the door on her.