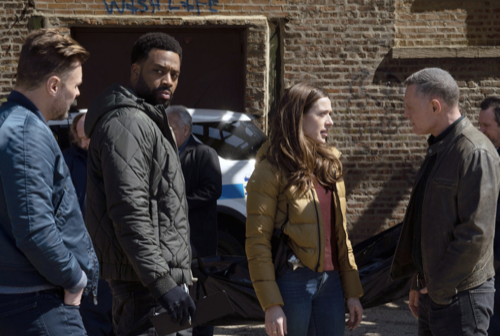 Tonight on NBC their drama Chicago PD returns with an all-new Wednesday, April 21, 2021, season 8 episode 13 called, “Trouble Dolls” and we have your Chicago PD recap below. In tonight’s Chicago PD season 8 episode 13 as per the NBC synopsis, “The shocking murder of a young pregnant woman leads the team on a desperate hunt for the killer, revealing something even darker than expected; Burgess has to make a tough decision about Makayla.”

In tonight’s Chicago PD episode, the episode begins with Burgess, she is at home and Makayla is putting on a fairy princess performance for her. The next day, Burgess is dropping Makayla at school and tells her she will see her that night. Burgess leaves and responds to the call. She gets there, a woman is laying on the roof of the car from two shots in the head. Burgess thinks she survived the fall and when she moved someone came and popped her. They turn her over and see that she is pregnant. They got her fanny pack off, her name is Sofia Perez.

She has trouble dolls in her pack, Voight is on-site, Burgess says she was either pushed or fell, but she was definitely popped after the fall. Atwater sees a security camera across the street, it has a pretty good angel. Back at the station, they see Sofia drop onto the car, she is alive after the fall, a man in a blue jacket with a red marking on the back runs up to her after the fall and shoots her twice with a 38.

Burgess gets a call from the DCFS case manager, the next steps, Burgess needs to pick a backup custodial if something happens to her if she dies. Burgess says she needs a few days to think about it.

Back at the station, they find out that Sofia arrived at the airport three weeks ago from Guatemala city, one-way ticket paid in cash. A guy found Sofia at baggage claim, he takes her to her car, his name is Alex Alonso, 22 years old. Voight tells them to scoop him up quietly.

Voight has Alex in the station, he shows him photos of Sofia with him at the airport, and of her body on the roof of the car. Voight tells him that he brought the lamb to the slaughter. Alex says they tell him nothing. Voight asks where he brought Sofia after the airport.

The team heads to the location undercover, Ruzek is the one to go in disguised as a meter man. He’s inside, he tells Atwater and Burgess to come in the back door. They look around and they don’t know what kind of place this is. They see an open door, Ruzek heads in first, with the two behind them. Burgess sees fresh food on a table, someone was there. Ruzek sees women’s clothing, they go into another room and it looks like a surgical room, there is blood on a table, there are incubators, babies were born there.

Back at the station, Atwater says there were handcuffs on the beds and bars on the windows. After they killed Sofia they abandoned the place. They got a hit on blood found in the place, Carla De Leone. Burgess has an idea, to drop by a church in the neighborhood because that is where a girl would probably go for help. The priest at the church recognizes Carla, he tells Burgess that she is in the shelter. Burgess goes inside and sees her, she tells her she can help her find her baby.

At the station, Burgess tells Carla that Sofia is dead, and her baby. Carla says she was pregnant, these men, they brought her to America. She paid them everything she had, they promised her to give birth to her baby in America. A girl previously tried to report them and something happened to her. Sofia made noise as well, and she got murdered. They gave Carla a plane ticket and told her to go home, if they see her again they will kill her. Burgess asks her who did this.

David Cardona, who runs the day-to-day operations of the baby farm, he has a boss named Flocko. Carla has only seen him a few times, but everyone is afraid of Flocko. Upton has a trail on him, takes the subway every day at the same time. The team heads out there to catch him. Upton has eyes on Cardona, he pulls a gun and starts shooting. Burgess runs after him, she is not too far away, they are under the overpass. Burgess trips and falls, he starts shooting at her. Lucky for Burgess she gets up just in time and Cardona has to reload. Burgess pulls out of where she is hiding and shoots several times killing Cardona.

At home, Burgess pours herself a glass of wine. She hears Makayla scream and runs into the bedroom. Makayla says they are coming to get her, Burgess reassures her that nobody is coming, it is just the two of them.

At the station the next day, they have a video of Cardona three days earlier making a drop to a guy named Bruce Alan Wegner, Voight says it doesn’t look like a Flocko to him. Bruce is a doctor, an OBGYN.

Burgess has Bruce in the station and she is asking him questions when she gets a call from the school regarding Makayla, she has locked herself in a room. Ruzek calls Burgess, she ignores it and speaks to Makayla outside the door who says she just wants her mommy. Burgess tells her that she has her, she knows it’s not the same, but she is safe and she is still loved. And she would appreciate if she would let her see her, to know that she is ok. Makayla unlocks the door. She comes out and hugs Burgess who tells her that she is really brave, but she shouldn’t have to be.

Burgess tells Bruce that the drugs they found, everyone thinks he is just some junkie, but she doesn’t think that is right. She thinks that his marching orders are pretty simple, keep the women alive and delivers their babies. It seems that he treated these women like queens, she thinks he never stopped caring. He says he hates himself for being a part of this, so he worked and worked to make sure the women were healthy. He says there is no greater pain. Bruce has never seen Flocko, but he gives them a name, Wilson Richards, CEO of an adoption agency in the burbs. Wilson is the baby broker, he buys the babies for forty grand, sells them for eighty grand. Voight tells her to pay him a visit.

At Wilson’s office, Atwater arrests him. Wilson gives them Flocko and a location where he is holding the women. Voight tells the team to go in and get him. They head in, bullets are flying everywhere, Flocko takes one of the women and threatens to shoot her, but Burgess surprises him and tells him to drop the gun.

Trudy tells Burgess that Carla is going to get her baby back, Burgess is happy. Burgess tells her that she hesitated today, Trudy says maybe, but nobody got hurt. Trudy reminds her that she has to name a guardian if something happens to her for Makayla. At home, Burgess is going through her mail when there is a knock at the door, it’s Ruzek. Burgess tells him that if something happens to her, she wants him to take care of Makayla because they were supposed to have a baby together because they are family because they are a lot of things, her last name is Burgess now and one thing they can be is this whole big round thing that can protect Makayla and she needs that. She tells him that he can say no, he says yes, of course, and he is honored that she asked him. They shake hands.

Burgess is with Makayla, she gives her the trouble dolls. She tells them to put them under her pillow and in the morning, all her troubles will be gone.