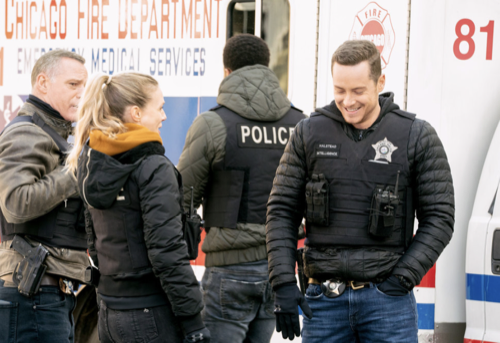 In tonight’s Chicago PD episode, the episode begins with Halstead and Upton who are in the car, she leans forward and she kisses him. He leans in for a bigger kiss, it is late evening.

The next morning, Platt sees Upton and tells her that Voight is looking for her about the class she was supposed to teach, not everyone gets picked to be a guest instructor at the academy. She says she has that covered.

Upton goes in to see Voight, she tells him something personal came up, she is really sorry. Burgess comes in and says they have a home invasion.

Halstead is questioning the woman who owns the home, she tells him what happened. She forgot her phone so she returned home and all of a sudden there was a glove around her mouth and a man demanding she punches in the security card. There were two guys, with ski masks, the big one pushed her inside and wanted to know where she kept her jewelry, that is when her husband, Peter, came downstairs and he had his gun, he told the man to put down his but then he just shot her husband.

Her husband had time to react, he just fell down. The other man got nervous and said no, no. The bigger man wouldn’t let her attend to her husband, he forced her upstairs to open the safe and took everything from it, and ran.

Upton briefs Voight, she tells him that they think it is the same two from the other home invasions, the big one who makes all the orders and the quieter one. Atwater says that a neighbor witnessed the offender go into a silver BMW, she didn’t see the plates. Voight says the timing between invasions is getting shorter, that is the second one this week.

At the station, Ruzek says they got the guys Rolex. Burgess is able to see that the BMW drove to an area where there are many pawnshops, and nobody thinks that is just a coincidence. Upton and Halsted head to Chi Town Pawners. Inside, the owner, Jeff speaks to them. Upton tells him that they need to see his inventory books and he says no, nothing has come his way because he would have reported it. Upton shows him the photo of the Rolex, he hasn’t seen it. Halstead says they are looking for two guys, one taller than the other in a silver BMW. Jeff doesn’t respond, but his employee, Blaster, says he saw the silver BMW parked out front.

Upton and Halstead are bags in the car, she looks up Jeff Tolan and he has a rap sheet. He is out on one-year parole, he used to own a jewelry store and owes child support and alimony. Jeff comes out of the shop, they follow him.

They have eyes on him, Upton calls it into Voight who tells them to keep him posted. Jeff gets out of his car and comes over to Upton and Halstead, he says he knows the guys but if they know he talks they will kill him. At the station, Jeff says a guy named RJ approached him. They wanted to unload ruby earrings, he unloaded them to a buyer in NY. This morning they did show up with the Rolex. Jeff tells them to wire him up, they get their high-profile bust, he gets to pick his kids up at school and wipe his felony charge.

Jeff admits that he screwed the two guys a smidge, the NY guy wired him $60k, he said it was $50k and he gave them their cut from that. RJ messages Jeff, he changes the location for the meet tomorrow which makes Upton and Halstead suspicious, the new area is a surveillance nightmare. If things go south, they are picking up a body. Burgess comes in and says that the home invasion just upgraded to murder, Peter Harper just flatlined at the hospital. Voight tells them to use Jeff as bait, they have no time.

Jeff tells Halstead and Upton that there was a white car circling his house last night and he is worried, what if RJ found out that he was skimming off the top. They assure him that they will be there.

It is time for Jeff’s meet, a white van shows up, Halstead sees the passenger holding something shiny. Voight tries to run the plates, but Upton says she is going in. They pull over the van, it is negative, Halstead was wrong, it wasn’t a gun. Now RJ saw the police activity, it’s gone from bad to worse. Halstead takes responsibility. Voight asks Upton what happened, she says she went with her gut. He tells her she went with her heart. Then he asks her if she and Halstead are a thing, she asks him if it matters. He says if it affects how she policies it matters, she swears they made the right call.

Halstead and Upton are in the bedroom, she asks him if he thinks that they made the wrong call, he says no. She says she thinks they need to set better boundaries. No more coming into work at the same time, no more physical contact in the bullpen. He says he gets it, it’s ok.

The next morning, Upton is working on the case when Ruzek walks in and tells her not to beat herself up about yesterday. Upton is able to narrow down that all the victims belonged to the same prestigious club. Upton and Halstead go to speak to Megan Harper, she says they have been members for six years. Just then, a call comes in for another home invasion.

They arrive on the scene and the two offenders are there, they fire their guns. Atwater is close to one of them, but he goes into an alleyway, takes off his jacket, and runs. In the house, there is a body on the floor, a young boy named Paul is the victim, he is dead.

Later, at home, Upton is going over the file and Halstead keeps messaging her but she doesn’t answer. Through her research, she gets a hail Mary and they are able to ID the two offenders. Miguel and RJ. Miguel grew up poor in the Bronx, looking for a father figure, he teamed up with RJ. They believe that Miguel used to live with RJ. Miguel volunteers at an animal shelter on Wednesdays, and it is Wednesday. Halstead and Upton are in the car outside the animal shelter when Upton sees Miguel come out of the shelter. They both get out and run after him, they catch him in an alleyway.

At the station, Miguel says he didn’t shoot anyone. Halstead tells him that if he doesn’t help them, he is going to prison for the rest of his life. He says he was starving, living on the streets, and eating out of a dumpster when RJ saved him, he won’t turn him in. Halstead tells him that RJ used to rob banks with Jose, he let him bleed out after a botched robbery, he uses desperate kids. He sucks them into his crimes. He might actually care about him, but sooner or later, he is going to ruin him. If he walks away from him now, Halstead promises to get him a deal. Miguel says he is sorry that the boy died, but he can’t help them, he is crying.

Upton gets a hunch, maybe RJ works as a valet at the country club, she calls and finds out that she was right, and she gets an address, the house belongs to Louise Wolfson, she died two months ago – the house is vacant. Upton calls Halstead and they are both at the house, she wants to go in and he doesn’t agree, he says they should get a warrant and do it the right way. The two go in anyway and look around, she finds the black mask in a bag. RJ arrives back at the house, Upton and Halstead run out and hide by the side of the house. RJ sees them and shoots, he gets back in his car and speeds off, the two are in pursuit, Halstead calls it in.

RJ stops and takes hostages, Halstead gets a clear shot and shoots RJ. Voight arrives on the scene, RJ is dead. Voight ells them they did good, then asks how it happened. Halstead says they didn’t go inside the residence, Voight looks like he doesn’t believe him, Halstead says it was by the book – Upton doesn’t say anything. Once Voight leaves, Upton tells Halstead that he didn’t need to back her up.

Later, Voight tells Upton they got the guy, go home. Upton tells him that she and Halstead are together, maybe it is messing things and she doesn’t want to ruin the best job she has ever had. She says maybe she needs a new partner. He says no, he is not splitting them up, they are good together. He tells her to just be careful, he knows she likes to do things her own way.