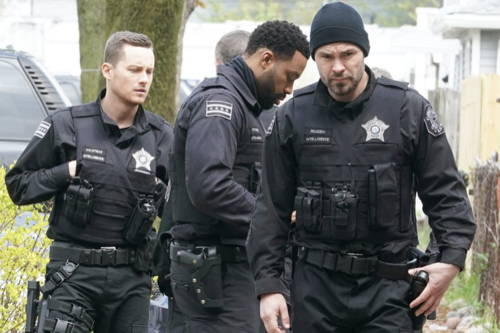 Tonight on NBC their drama Chicago PD returns with an all-new Wednesday, May 19, 2021, season 8 episode 15 called, “The Right Thing” and we have your Chicago PD recap below. In tonight’s Chicago PD season 8 episode 15 as per the NBC synopsis, “Voight and the team pursue a ruthless crime ring whose business has hit close to home; as they dig deeper, the extent of the danger becomes more apparent; Deputy Superintendent Samantha Miller second-guesses her decisions.”

In tonight’s episode Of Chicago PD it begins with Voight, he meets with Deputy Superintendent Samantha Miller, she buys him a scotch and tells him that she is happy that things are going better in the department. Her son walks up and she introduces him to Voight, he has been living in Atlanta and he has been in Chicago for two months, she told him to stop by. Her son gets a text and walks away. Voight asks her how he didn’t know she had a son. She says that he lived with his father.

Voight leaves the bar and notices that he is being followed. Voight manages to corner the guy’s vehicle, he gets out to find out that it is Miller’s son, he says he owes a lot of money and if he doesn’t pay it they are going to kill him.

At the station, her son tells Voight that he handles a little coke, his clients pay him back, but it takes time and he got under with his dealer, Kent Darby, who owns a strip club. Voight wants to know why he is there and why he didn’t tell his mom. He says he messed up, this will kill her. He asks him if he can help him without telling her.

Voight goes right to Miller the next day, she tells him that he is not a bad kid, he just has a gift for finding trouble. Voight says as far as he is concerned, they never had this conversation. She says she wants him to help him, treat it like any other CI.

Darel meets with Kent at the strip club, Atwater and Ruzek are outside in a van listening in. Halstead is inside the strip club. Kent tells Darel that if he doesn’t bring the money “he” will kill him. He brings Kent cash, but it looks like something is up. Kent opens up his safe and looks like he has about half a million dollars in coke.

Darel is back with the team and Atwater is upset and thinks he is lying about not knowing what the real guy is who is running this business.

Darel is with his mom, she tells her that he was just dealing with guys that he thought were his friends. He might be stupid, but he is not a big-time dealer. Miller then goes to speak to Voight, she tells him they have to build up, he says if they run this by the book this is going back to her. She says they don’t get to pick and choose, they have laws and they need to follow them. Darel needs to have consequences, he needs to feel this.

The team is looking into Kent Darby, everything looks legit. Voight says get Darel to introduce them as buyers, they need to get in there.

Darel is in the strip club trying to get Kent to work with his two friends, who are Atwater and Ruzek undercover. Kent is not impressed, he tells them Darel is a child and came to pretend that he was screwing the strippers. Kent says their friend was lying to them, he doesn’t deal. Kent pulls out a gun. Atwater and Ruzek leave and thank him for his tie.

Atwater tells Darel that they are done. Darel says this is not who he is, he made the wrong move. Ruzek says they need to slow things down, things are too risky. Atwater says they have to fall back. Ruzel drives Darel home. Late that night, Ruzek gets a call from Darel at 4 am, he hears him arguing with a guy, he thinks it is Kent – Ruzek thinks they were driving.

Ruzek calls the team to the station, Voight, Trudy, Atwater are there. They are able to track the phone, Ruzek, Voight, and Atwater head out, they arrive at what looks like the underneath of an overpass. Atwater finds Darel’s phone. Miller arrives on the scene, they don’t know where Darel is, she tells them to get Kent’s address and go over there right now.

Their theory is that Darel went back to the club to get the deal back on track and something happened, he saw something or said something that he shouldn’t have. Upton comes in and says they have footage from across the street. They watch the video, Darel exits the club with a woman. Kent shoves the two of them into Darel’s SUV. Another man shows up, he doesn’t turn to the camera, but his plates come up as Roy Walton, arrested and released three times on suspected drug trafficking. Halstead said they have something. Twenty minutes ago they got a traffic cam of Roy’s vehicle and it headed into a garage that he owns.

Voight and the team want to head to the garage but Miller says no, they don’t have a warrant. Voight is against it, he is shouting at her, he tells her this is not reform, this is about doing what needs to be done to save her kid. She says they don’t get to break the law to save her kid, every victim is somebody’s kid. They got a hit on the woman in the video, she is in the subway. Halstead and Upton head there to speak to her. They find her, she is fourteen years old, Upton shows her a photo of Darel, she says he tried to save her, her name is Sasha.

Sasha tells Upton, Voight, and Halstead that they brought her and Darel to a body shop after they discovered some stuff on Darel’s phone. Kent and she waited in the car, Roy went inside. After that they went to the water, she was scared, Kent got out of the car, she ran. She says there were these giant brick gates, like a castle near the water. Halstead says that is the power station in the fourth district.

The next stop is the power station, the team spreads out and starts to look around. Halstead finds Darel, he has been shot and is dead. He bled out about an hour ago, he was killed somewhere else. Burgess says there was blood at the Bodyshop. They tortured him and killed him there. Voight tells the team he wants those two men in custody by the end of the day. Miller shows up, she runs to her son and sees him dead.

Sasha is at the station, she says she doesn’t know where she is taken, she has to wear a blindfold. It’s in the city, it takes ten minutes to get there. There is a sign she can see from the bathroom window, G&C. They find the building, the whole team is there. Ruzek busts in the door and they go inside. They find three young girls that were murdered. Voight thinks that Darel told them that he was working with the police and they are tying up loose ends.

Miller arrives, Voight tells him that the girls inside are dead, Roy and Kent were sex trafficking. Her son was trying to save them, he saved Sasha. He tells her to go home, take care of herself. He tells her that when the music stops, that is when the pain hits. She says she killed her son and these girls because she was trying to do the right thing.

They head out in teams, Burgess is at the second location, she is dropping anchor until the team gets there. A guy hits her in the face from the window, pulls her out of the car, throws her on the ground, and kicks her in the chest.