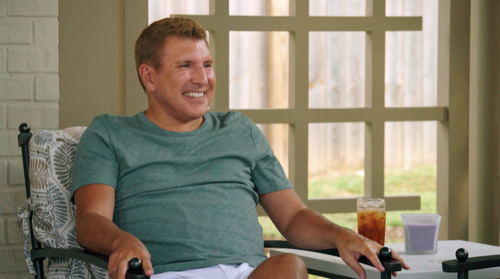 Tonight’s episode begins with Grayson being so big now. He’s taller than his brothers and his father. Grayson also has his own business. He has a sneaker business. He sells sneakers and unfortunately business hasn’t been so good. Grayson’s sneakers haven’t been selling lately. It was his social media that was to blame for it. His social media game was lackluster. He went a week without posting new content and so Savannah offered to help him with social media. She was telling him about how to prioritize his business’ Instagram page and within days Grayson noticed a significant change in his sales. He began selling again. His business started being able to stand on its own and his sister was to thank. She truly did help him, but Grayson’s father Todd thinks he could have done it better.

Todd likes to feel important. His whole family knows he’s a diva. Todd offered to help Grayson with his business and Grayson chose to accept his sister’s offer but that doesn’t mean Todd took a step back. He still decided to “help” Grayson. Todd ended up buying sneakers from Grayson and he’s the real reason why sales have gone up. Todd hadn’t wanted Grayson to be hurt with a struggling with his business and so he decided to help by buying up the sneakers. He even hid them at Nanny Faye’s house. Faye hadn’t been feeling well and Chase and his friend Elliott brought her some soup. They found the boxes of sneakers there. Faye said the sneakers belonged to Todd and so the guys found a pair that fit them. And they chose to wear them to meet up with Grayson.

Grayson remembered the shoes. He said he just sold them and so Chase and Elliott told him about Faye. They even went to Faye’s house. Grayson found the sneakers and he confronted his father. His father said he did buy a bunch of his shoes because he hadn’t wanted Grayson to be discouraged. He thought that by buying up the sneakers that Grayson would get a confidence boost. But Grayson had gotten upset. He didn’t want help like that. He wanted to be able to stand on his own and his siblings supported him. They also reminded Todd that he didn’t do anything like that for them. Savannah and Chase both told Todd that Grayson needed to stand on his own and Julie backed them up.

Grayson may be the baby of the family but he’s not a baby any longer. He’s growing up and he deserves to be taken seriously. This includes his business. Julie told Todd that he has to fix things with Grayson without using his wallet for once. Todd agreed and he later picked Grayson up so that the two of them could hang out together. He also took that opportunity to apologize for what he did. Grayson forgave him and the two enjoyed themselves hanging out. Later, Todd took part in a bachelor’s auction. It was to raise money for the senior center and his mother asked him to do it. He thought that his wife Julie could outbid everyone so that way he doesn’t have to go home with an old lady and funnily enough there was a policy that forbids family members from bidding on each other.

Todd didn’t know this rule while Julie did. She kept it a secret right up until the auction when someone else won him with the winning bid and so he had been so angry. He hated having to help someone with their chores. But he was polite. He never lost his temper with the woman who won him and he managed to clean the pool with great skill though he was upset he was sold at a hundred and fifty dollars while Chase’s best friend Elliott went for a thousand dollars.