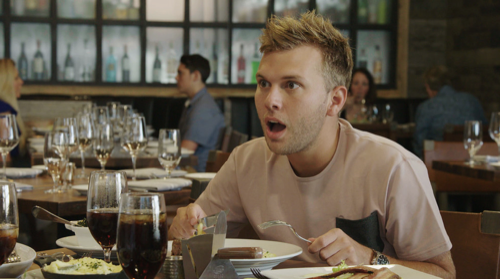 In tonight’s Chrisley Knows Best episode, Savannah began her own company. It’s called Sassy. It’s a cosmetics line and its branching out. She was now coming out with hair blow-dryers. She has several launches and one of them fell on her older brother Chase’s birthday. He told her that he wasn’t sharing his birthday. Chase’s birthday happened right after Memorial Day and so he never got to celebrate it when he was young.

His parents would just say they were already at the beach house. Chase hated celebrating his birthday because it was never like Savannah’s birthdays because her birthdays would be big and amazing while he was not. His was anything but. Chase wanted to change that so he told his parents to do something amazing this year and Julie felt guilty enough to do it.

Julie was going to throw him a big childish birthday. Chase needed cheering up anyway because he had recently broken up with his girlfriend and so Julie planned something amazing for him. But it was a surprise. She made it out like she was going to make all of his favorites when really she rented out a trampoline park and there were going to be face-painters and popcorn.

It would have been amazing if Chase hadn’t broken his foot right before it. Chase broke his foot and he wouldn’t be able to enjoy a trampoline park. Julie was looking for other ideas and Chase in the meantime was believed his birthday was cursed. He still was able to move around. He went out and enjoyed himself with Nanny Faye.

Chase and his grandmother were very close. She loves spending time with her grandchildren and she wanted to spend time with Grayson as well only he was a teenager. Grayson didn’t want to hang around with his grandmother. He wanted to hang out with his friends. Chase was like that at that age and he reminded Faye when she got sad about Grayson. Faye remembered what a douche Chase was.

She felt better about not being enough for Grayson and that’s why Faye responded to the secret meeting that Julie called. Julie asked Faye and Chase’s best friend Elliott to meet with her and Todd because she wanted ideas for Chase’s birthday. Her original idea was out because Chase broke his foot. And so Julie needed something else.

The family was working on it as Chase took time to talk to Grayson. Chase told Grayson that there will always be another party and that he will only have one Nanny Faye. Julie lost her own grandmother when she was young. She wishes she had to spend more time with her and so that made Grayson realize he hadn’t been fair to his grandmother. He later got butterflies. Something she loved.

He got butterflies that come alive when they’re held and he and Faye set butterflies loose. She loved it and she loved him. She was glad that he was taking time to spend with her and Grayson apologized for being a jerk earlier. And so the two got to enjoy themselves and Faye got to take part in Chase’s birthday party.

They couldn’t find a new venue and so they kept it at the trampoline park. It was a nice big party and Chase still enjoyed himself but the topper was the monkey. Chase has always wanted a monkey. They rented one for a day and Chase was so happy that he said it was the best birthday he had ever had.