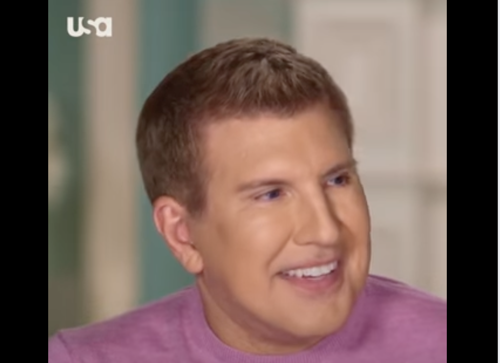 In tonight’s Chrisley Knows Best episode, the Chrisleys are a family first. The siblings got a bubble suit so that they could work out their sibling rivalry and it was great because they had a lot of fun and got to be silly. The siblings also worked together to spy on their grandmother otherwise known as Nanny Faye. Their father Todd worries about his mother because he said she acts like a kid and so he hires his children to spy on his mother. They spend time with her. They also report on her movements. It turns out Nanny has a boyfriend. Her boyfriend has been sending her expensive orchards. Chase doesn’t know about the boyfriend but Savannah reported on it and that’s why she wasn’t Nanny’s favorite. Everyone knows Grandma’s favorite is Chase.

Chase and his grandmother are two peas in a pod. They hang out every week and it’s a routine for them by now. It, therefore, shocked Nanny Faye when Chase decided to cancel their plans to hang out with Papa Harvey. Harvey is Julie’s father. He’s Chase’s grandfather and he went golfing with his grandfather rather than hang out with his Nanny. Then, to make matters worse, he later invited Harvey to poker night at Faye’s house. Faye resented Harvey’s presence. She was mean to him and Chase noticed it. Chase brought it up to his parents afterward. He asked them what’s the issue between Nanny and Papa. Julie thinks Todd’s dislike of her father was rubbing off on his mother and so she was mad at Todd.

Todd didn’t see the problem. He loves that his in-laws live far away and that they only visited a few times a year. He said as much to Julie but she told him to stop being “b*tchy” and to make things right. Julie wanted everyone to get along. She told Todd to talk to his mother and he did. He found out what’s behind the beef. His mother told him that Harvey once said Julie deserved better. Nanny had taken exception to that. Todd is her son and she had gotten offended. She told Todd why she doesn’t like Harvey and now Todd is mad at Harvey as well. Todd loves Julie. He’s given her a great lifestyle and several children. Todd doesn’t know why Harvey hadn’t approved of him much less why the man would tell his mother this.

Faye meanwhile is holding her grudge. Todd is her pride and joy. She didn’t know why Harvey hadn’t approved him and so she and Todd decided to confront Harvey. They had dinner at Todd’s house with Harvey and Julie. Todd revealed why his mother doesn’t quite care for Harvey. He also revealed he was hurt as well and Harvey explained that it was twenty-five years ago. He’s since changed his mind about Todd. He now loves Todd like a son. He would take a bullet for him and he said that too. Harvey loves Todd. He also said that if Faye had an issue with him that she should have mentioned it years ago. She shouldn’t have held onto her grudge. Faye admitted to being a little hot-headed.

Faye agreed to let the matter go. Todd felt better after hearing Harvey admitted he loved him and so they moved on. But it wasn’t long before Todd was in trouble again. Todd used his granddaughter/surrogate daughter Chloe to help get a leg up in the real estate market. He arranged a play date for her with a little girl whose family was selling their house and he had asked Chloe to ask all sorts of questions. Like the square footage, how many bathrooms there were, and if the place had been recently remodeled. Chloe got all of this information for him and it made the parents of her playdate a little suspicious. They returned Chloe’s coat to Julie and they revealed that Chloe had been asking about the property and they thought it was cute because they assumed she wanted to be an interior designer or something.

Julie immediately suspected something was up and so she asked Savannah. Savannah had been in the car with Todd and Chloe and she told her mother about the deal they made. Todd agreed to get Chloe a bike if she got information on the house. So, Julie later took Todd to task and he apologized for using a child to get a real estate booking.