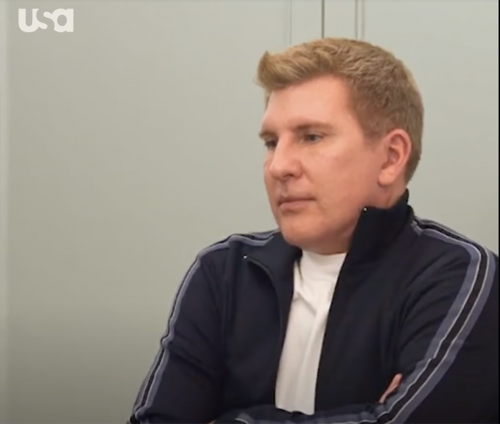 In tonight’s Chrisley Knows Best episode, Grayson is finally free of his braces. He now has straight white teeth to show for it. His braces were finally removed after the holidays and that wasn’t the only thing that changed. Grayson has a car now. He was growing up quickly and he wasn’t the baby of the family anymore and so his parents bought him a car. Grayson was fifteen. He was of the age to get a permit and the only thing preventing him from getting one is his father, Todd.

Todd was being extra cautious with Grayson because he remembered Savannah’s car crash and how they almost lost her. Her accident has left Todd with a deep fear of his children driving. It’s why he kept pushing back Grayson’s lessons. It’s also why Todd went a little overboard when he finally allowed Grayson to get behind the wheel of a car.

Todd outfitted the car for problem areas. He put yellow and back signs all over the car. He also put in a miniature cage for Grayson’s cell phone so that he wouldn’t be able to answer calls when he’s driving. Grayson’s driving lessons with his father were both embarrassing and uneventful. Grayson barely did anything.

He was so frustrated about the lack of progress and he was also a little angry about all the warning signs that Todd put on his car that he took it out on the jacuzzi. He shot off golf balls into the jacuzzi with his brother. It had been Chase’s idea. Chase understood how domineering their father could be and so he was doing his best to support his kid brother. Julie was also trying to help.

Julie reminded Grayson that Todd was being a control freak because he genuinely cares. Todd doesn’t want another member of his family to have an accident or risk possibly losing them. Julie was in that Todd was concerned and that’s why he couldn’t let go of control but Todd was also a control freak as well. He later freaked out when Savannah ripped out the master bath of her new house.

Savannah had moved into Todd and Julie’s old house. She was now decorating it to fit her tastes and so she tore out the old bathroom to put something better in its place. Only Todd freaked out when he saw that. He couldn’t believe Savannah went behind his back to do that and so he started taking pieces home with him so that she wouldn’t destroy them.

Todd later felt bad about his reaction. He spoke with Julie and she told him that it was Savannah’s house now. Of course, Savannah wanted to change things. Savannah can change every single detail if she wants because it’s her house and she has the right to feel comfortable in it. Todd came around to Savannah’s redecorating and he offered to help wherever she needs him.

Todd also saw the light about Grayson. He had been told he embarrassed Grayson by taking him to his baseball game with all the yellow and black stickers on it saying “Slow Down”, “Be Safe”, and “Student Driver”. Grayson was so embarrassed that he hadn’t wanted to go driving and he had been looking forward to driving for months. He even slept in his car at one point because he couldn’t wait to drive.

But Todd removed all of the safety measures with Grayson’s help and then the two of them got back to practicing driving on the road.