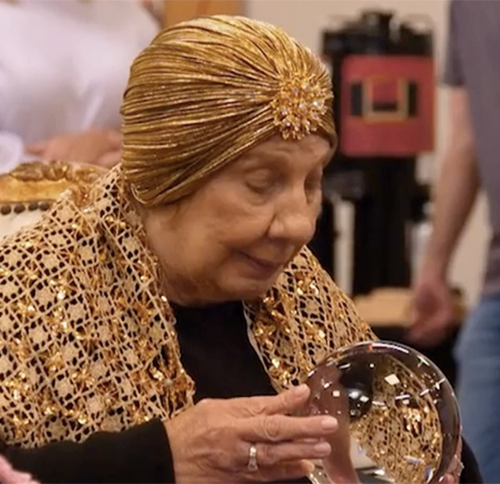 In tonight’s Growing Up Chrisley, Todd and Savannah shared some quality time. They went to go get pedicures and, as they were being treated, they got to talking. Todd offered Savannah advice on her business. He’s been very hands-on in assisting her cosmetics line and some would even call it relentless. Some people like Savannah would like for Todd to take a break.

Todd is always saying how he drew inspiration from Oprah in how she built her business empire and so Todd likes to call himself “Toprah”. He tells Savannah that she should be more like him. Todd believes all of the good qualities that his children inherited were from his side and that their tendency for lateness came from Julie. Julie was late for everything.

But Todd is uptight. He’s always business all the time and he wants his kids to take after him. its why he’s on Savannah about focusing on work. He also came up with new names for her lipsticks and so Savannah really just wants a break from it all. She spoke with her mother. Her mother said that’s how Todd is and, rather than accepting it, Savannah wanted to play a trick on him.

She gets her tit for tat from her father. She was also uptight like. She simply doesn’t realize that last part and so it’s a good thing Chase is around because he told her that she was just like their dad. She was a female version of Todd. Everyone has said so from the very beginning and it was only Savannah who couldn’t see it.

Chase was also dealing with his grandmother. Nany Faye was getting into the spiritualistic side of fortune-telling and naturally, it was her friend Susie leading her on. Susie was a bad influence on the Chrisley matriarch. She took Nany Faye to a nudist colony. She now has her using crystals, burning sage to ward off spirits, and she was even reading tarot cards.

Nanny Faye tried out on her grandson Chase. She managed to guess the number he was thinking of. He now thinks she has powers and so he encouraged her by believing her. She went on to read cards at a senior center. She lead people on by correctly guessing about their lives and it really was guest-work. She doesn’t have powers.

Nanny Faye managed to convince several people that their loved ones were watching over them. Julie was watching from the sidelines and she called like it she saw it. She called Faye a liar. She also thought she was taking advantage of people in their grief and so she asked her mother-in-law to stop but Faye said she was spreading joy. She also did a reading for Julie and she found a dark cloud over her. Julie just said that was her husband. The family later had a BBQ.

Chase mentioned that he had traveled with Savannah to an event and that stumped Todd because he was the one Savannah usually takes to those things. Todd asked Chase why Savannah brought him. So, Chase told his dad that Savannah has had a lot of complaints about him lately.

Chase told his dad that he was doing too much business all the time. He never has a work/life balance and so Julie said as much. Only Todd didn’t see it like that. He told Savannah when he invested in her business that he was going to push her all the time to be better and nowadays he was living up to what he said. He was pushing her to be better. The only thing that’s changed since that conversation was Savannah and so Todd realized he has to talk to his daughter. He invited her out to lunch.

He told her she had to give up the passive aggressiveness because she shouldn’t have taken Chase to a fashion event and Savannah told him that she needs a dad sometimes. Not a business partner. Savannah and Todd used to have fun hanging out. And now the only thing they speak about is business.

Todd said he would ease up. His mother in the meanwhile was labeled as a fraud at the senior center because a woman was seen speaking into the air when she thought she was speaking a deceased father and so Nanny Faye explained why she was trying to spread joy. She knows what’s  it like to speak to someone. She missed her friend. And so later the family arranged for her to see everyone on the television.

She got to speak to her South Atlanta friends, her casino friends, and her basketball friends.