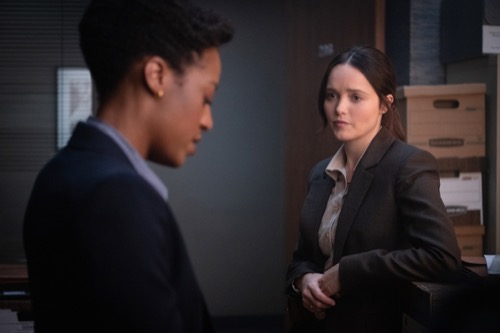 Tonight on CBS Clarice returns with an all-new Thursday, March 4, 2021 episode and we have your Clarice recap below.  On tonight’s Clarice season 1 episode 4 “You Can’t Rule Me,” as per the NBC synopsis, “Following the assassination of a suspect, Clarice and VICAP is investigated by Krendler’s rival at the Bureau; when Ardelia is recruited to assist him, it causes friction between the two friends.”

Tonight’s Clarice season 1 episode 4 looks like it is going to be great and you won’t want to miss it. So make sure to bookmark this spot and come back from 10 PM – 11 PM ET for our Clarice recap.  While you wait for the recap make sure to check out all our Clarice recaps, spoilers, news & more!

In tonight’s episode of Clarice, Anthony Herman is in the bureau, investigating why a suspect was killed. Murray tells Anthony to not make such a big deal of it. Anthony is Krendler’s rival and he is bad-mouthing him to Clarice. Murray is annoyed that Anthony’s men went through his thing, he says he is on team douche. Krendler tells Tomas to stop making himself nuts, he did everything by the book. Anthony is trying to get on Clarice’s side, he tells her the bureau is proud of her and she could work for him. He asks her if there is anything in Krendler’s conduct that would help him with the investigation, she thinks.

Later, Clarice tells Krendler that Anthony wanted to through him under the bus. VICAP is told that they are all on desk duty for now and can handle complaints.

Clarice tells Ardelia what Anthony tried to do, but says she doesn’t know if she should trust him. Ardelia is annoyed, she says she is compromising her because she is investigating this case with Anthony.

Clarice leaves the station, Tomas asks her where she is going, she says whoever killed Wellig is a professional and they need to find them. Shaan is with them, he tells them he has people that are going to cover for them, they need his ten years of experience at the bureau.

Clarice tells Shaan that they are going to go see Rebecca Sherman’s boss. Clarice is speaking to her boss, he says she is still pretty shaken but hanging in, she wouldn’t say where she is. She asks for his permission to look through her office, he tells her not without a warrant. Shaan in the meantime is speaking to a woman in the hallway near the photocopier.

Murray is asked where the rest of his team is, he says in the bathroom, how does he know, he doesn’t keep track of them.

Clarice and Shaan are back in the car, he got a piece of trash from the cleaning woman, that Rebecca tossed near the photocopier. Rebecca was looking for Dr. Marilyn Felker.

Krendler is sitting in his office, he asks Anthony how he likes his office, Anthony says it is stale. They talk about an old case, where Anthony got a promotion because he did his dirty work for him. Anthony tells him that his priorities were always ass-backward. Krendler tells him that he has been behind the desk so long that he doesn’t know what a good agent is.

Clarice is back in the office, she calls to speak to Dr. Marilyn Felker, she, along with Shaan, Murray and Tomas are working the case behind Anthony and his team’s back. Clarice finds out that Dr. Felker’s license was revoked five years ago for failure to meet the standard of care. A woman calls Clarice, she is Marilyn Felker’s sister, Louanne, and she asks if her sister is ok, why is she looking for her.

Ardelia is looking at the security footage of the officers the day before, she is trying to find the one that brought in the lunch. She sees the sketchy lawyer, and she sees the cop, but he is not dressed as a cop.

Shaan and Clarice are back out, they got to see Louanne, she says she hasn’t spoken to her sister in years. She tells Clarice that they are twins, but her sister was always different than her. Louanne asks them to keep them informed if they find her sister.

Adelia is working, Agent Garrett asks her on a date, she says no, then he asks her to a black coalition event and she still says no.

Tomas prints a photo of the phony copy, he had a phony ID as well. Clarice goes up to Krendler, he says he spoke to her therapist. She says she has a list of approved therapists and will pick one soon. She asks him why Anthony is there, he says because their boss wants him there. But now, Anthony wants to take his best agents for his team. He tells her that he has been hard on her because when she found Buffalo Bill, she didn’t tell anyone where she was and she could have died. Other agents could have died looking for her. The hardest part of this job he says is figuring out this is not about you. Maybe she will help Anthony get him out.

Clarice meets with Ardelia away from the office, she hands her a file and tells her Welligs killer was using the alias Mike Dias. Ardelia is upset, Clarice explains that she has nobody to give it to and these women are depending on them. They have been in the Dias account, there is a payment for Michelle’s company that belongs to Marilyn Felker, the doctor that oversaw the clinical trials where the whistleblowers were in. Ardelia tells her to stop, she doesn’t need a leg up from her. Ardelia tells her off, Clarice tells her the only thing that matters is the victims. Ardelia tells her if she talks to her again, she will tell Anthony.

At Marilyn Felker’s residence, Tomas, Shaan, and Clarice arrive guns out. They search the apartment, she doesn’t appear to be there. Meanwhile, Ardelia tells Anthony that Krendler tampered with evidence, he went into the system and changed the logs, that he personally signed in all the Baltimore police officers and vetted them, whether he is protecting himself, or someone else, he crossed the line. He tells her to give all her notes and everything to Eddie he will wrap it up. She tells him that she put everything together, this is her case.

Clarice sees a picture on a wall in the apartment, it is crooked and it makes her suspicious. She takes it off the wall, there is a piece of paper with all the names of the women that Wellig killed. Shaan finds the chemical toxic used to kill Wellig in the kitchen cupboard. Shaan gets a call, they have to get back, they are shutting down VICAP.

Anthony tells Krendler that Wellig got killed on his watch and he tampered with the evidence. Clarice, Shaan, and Tomas are back, Tomas says he is the one who did the log. Anthony gets a call and rushes out. According to the coroner, Wellig had a stroke, that is what killed him.

So, Anthony doesn’t have a case. VICAP is off the hook. Murray asks Krendler if someone changed the coroner’s report, Krendler says he didn’t do it, but someone did and they have power, but he has no idea. He says someone wants them to stop looking at these murders. Clarice keeps investigating, she finds out that Dr. Felker booked a ticket to Buenos Aires but never made the flight. Next, Clarice goes to see Ardelia who tells her she knows she thinks that Anthony was using her to get to Krendler. Clarice tells her that she let her down, and wants to know what she can do. Ardelia says the work.

Clarice heads back to where Louanne works, she finds her taking care of some patients. Clarice asks her why her sister would want to go to Buenos Aires. A bell goes off, Louann says she needs to check an IV. Clarice sees a woman lying in one of the beds that looks a lot like Louanne and a photo of her and Marilyn. She tells the woman that she is the FBI and all of a sudden, Louanne is behind Clarice and stabs her in the neck with a needle