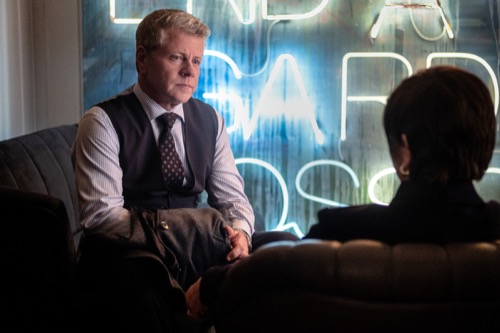 Tonight on CBS Clarice returns with an all-new Thursday, March 11, 2021 episode and we have your Clarice recap below.  In tonight’s Clarice season 1 episode 5 “Get Right With God,” as per the NBC synopsis, “Clarice is drugged and confined to a hospital bed by a serial killer in the medical profession, causing her to experience intense hallucinations.”

Tonight’s Clarice season 1 episode 5 looks like it is going to be great and you won’t want to miss it. So make sure to bookmark this spot and come back from 10 PM – 11 PM ET for our Clarice recap.  While you wait for the recap make sure to check out all our Clarice recaps, spoilers, news & more!

In tonight’s Clarice episode, in the end of the last episode we saw Clarice return to the D.C. hospital so she could questions Luanne about whether Marilyn was ever going to move to Buenos Aires. Marilyn stabbed her in the neck with a syringe, causing Clarice to pass out.

We see Clarice, she is in a bed in the D.C. hospital, she can’t feel her legs, she calls to a cleaning man, but he is listening to music and can’t hear her. Marilyn walks in and Clarice starts to remember, she was there looking for Luanne Felker. Marilyn gives her more drugs and Clarice falls into dreamland.

Ardelia is looking for Clarice, she knows she is missing. Clarice’s eyes are opened, she breaks off an instrument from the wall and hides it under her covers. She looks up and sees what looks like birds, she sees the glass breaking and it is actually millions of bees, then her head clears, she was hallucinating.

The team knows that Clarice is missing, Ardelia says that Clarice told her she thought that Marilyn Felker could be in the US and that she and Clarice had a falling out. Murray says that maybe she could be on a date, Ardelia gives him a look and he says, oh yeah, she has no personal life like the rest of us.

Clarice is hallucinating again, she sees her dad and he is dressed up as a lawman, she tells him he is supposed to be a doctor. She wakes up, Marilyn tells her that she was rambling. Marilyn asks her where Rebecca Clark Sherman is, Clarice, says they are still looking for her. Marilyn zaps Clarice with a defibrillator and when she doesn’t talk, she does it again. Clarice says Rebecca said nothing about the clinical trials, she was scared pretty well.

We see Clarice as a young girl, she is in the car with her dad, he is driving. He takes her hand and tells her people need family. She says the animals on the farm were her family. Clarice is back, she tells Marilyn that they found evidence in her house, the poison was easy to find, too easy. Clarice says they planted, they used her for the clinical trials. Clarice asks her if she knew the trials would cost birth defects.

Marilyn says she is lying, there is no they. Clarice says there is, and they always dump the girls. Clarice starts laughing and Marilyn tells her that this could be her life. Clarice asks about Luanne and asks about her circumstances; Marilyn says she can hear and see. Marilyn goes over to one of the other patients and undoes the ventilator, the woman is gasping for her, she tells Clarice it is her fault because she won’t tell her anything.

Tomas and Murray are in Marilyn’s house, Tomas notices there is a photo missing of Marilyn and her sister. Murray says that he thinks the poison was planted, it was found too easily.

Paul is out to dinner with his wife, Mandy, he tells her that he thinks he should be the primary caregiver for their children, she asks him how he is going to swing that since he works crazy hours. Mandy says the kids are staying with her and no judge is going to look at his job and give him the children. Paul gets a call; Murray tells him that Clarice is missing. Paul turns around, Mandy is gone.

Clarice asks Marilyn if she was ill as a child. Clarice sees the hitch in her step, Marilyn says it was sepsis and penicillin didn’t work, she was paralyzed for a year. Clarice gets it now, Marilyn’s parents put her on a clinical trial. Clarice tells her that she sees how hard it has been for her, she reaches for her hand, and then Clarice tries to stab her with the instrument she hid. Marilyn stabs her in the chest with a syringe, Clarice can’t breathe. Marilyn tells her that she needs her alive and scrambles to save her. Clarice is hallucinating again, this time she looks like she has fallen to the bottom of a very deep well. Clarice is panicked, she looks up and she sees Marilyn holding a dog. On the ground, there are many syringes, Clarice steps on one.

Ardelia and Shaan are in the D.C. hospital, Ardelia says she needs to use the restroom, Shaan stays with Marilyn. Ardelia looks around, she sees patients in beds, one is dead and Ardelia saw her hand move. Marilyn says it is normal for cadavers to move. When Ardelia asks her about protocol when a patient dies, Marilyn says she just passed away when they pulled up.

Clarice is awake, Marilyn takes the tube out of her throat and gives her a glass of water. Clarice tells her that she is sorry nobody took care of her. She says she saw the photo, Luanne was dressed clean and nice, she noticed that Marilyn was a mess and not taken care of. Clarice asks where her parents were if they checked on her and spared her a thought. Clarice tells off Marilyn and tells her that she has nobody, then she tells her to kill her.

Marilyn runs. Clarice tries to get out of the bed, she falls onto the floor and drags herself out of the room. Clarice sees her father; she tells him to call the FBI. She looks up, he grabs the phone and hits her on the head with it.

Back in the office, Tomas says this has something to do with the photo that was missing in Felker’s house. Krendler walks in and says they found Clarice’s car.

Clarice is back in bed, Marilyn is talking to a man, he says everything is ready for her and Luanne and they will get them out of there.

Back to Luanne, when she was young, she tells her dad that she burns letters after she wrote them. She wrote about Hannah the horse that she loved. She asks her dad why she burned the letters; he jokes that maybe she was sending him smoke signals. She tells him that she saw a helmet in the barn, she didn’t want that to be waiting for Hannah.

He stops the car and says sometimes thinking about scary things is the only way to survive, he vanishes, and we see Clarice in the bed again. She asks Marilyn what is happening. Marilyn tells her that she is taking her to the incinerator. All of a sudden, Marilyn is fixing the IV on Luanne’s arm when she sees Clarice is up. Clarice takes a syringe and plunges it into Luanne’s chest, she tells Marilyn, you are a doctor, now save her life.

Clarice is running through the halls, she is hallucinating, back to the farm and down in the well. She is trying to navigate the hallway and to get out of there. Clarice falls into Ardelia’s arms. The team is there, Ardelia tries to handcuff Marilyn, but she puts up a fight. Ardelia pulls out her gun while Krendler does chest compressions and saves Luanne. Marilyn has two needles in her hands, she takes the two and stabs herself on each side of the neck. Clarice tells Ardelia that there was a man in the house, but she didn’t see his face.