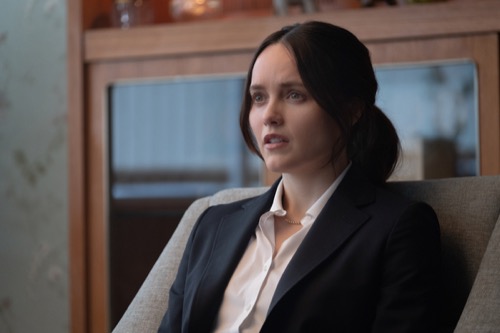 Tonight on CBS Clarice returns with an all-new Thursday, March 11, 2021 episode and we have your Clarice recap below.  In tonight’s Clarice season 1 episode 6 “How Does It Feel to Be So Beautiful,” as per the NBC synopsis, “Sidelined because of her harrowing ordeal with Marilyn Felker.

Clarice goes to Ruth Martin to be reinstated and gets roped into having dinner at the Martin residence.”

Tonight’s Clarice season 1 episode 6 looks like it is going to be great and you won’t want to miss it. So make sure to bookmark this spot and come back from 10 PM – 11 PM ET for our Clarice recap.  While you wait for the recap make sure to check out all our Clarice recaps, spoilers, news & more!

In tonight’s episode, Clarice is wearing a Johnny as they take samples of her fingernails and hair, looking for clues. She tells Ardelia about a man. She didn’t see his face. After, she works with a psychologist who uses hypnosis to try and get more from her. Paul and the others doubt this will work. She tries to see the man’s face. She fails. She can do it again. They tell her no. Paul wants her on leave.

The labs come back and there is nothing to go on. Clarice gets mad. She then learns she is on leave. She is angry, telling Ardelia she will get the man. They all just want her to rest. Ardelia gives her a card to a trauma specialist.

Clarice visits with AG. She pleads to get back out of that. The AG, Ruth, will think about it if she goes to dinner with Catherine. Ruth goes home and tells Catherine dinner is at 7 a.m.

Shaan and Tomas talk about the case. It leads them to talk about Shaan’s wife. She died after getting cancer. He remembers when she cried and apologize for not being able to have a baby. Meanwhile, Paul meets with a friend who offers to be his divorce lawyer. He thinks he can win. Paul gets a call from work. He has to go.

Ardelia cuts her finger cutting an orange. She gets an idea and calls the lab asking where the scrapings go after they are tested. She heads to a dumpster.

Clarice arrives at the AG’s house. The housekeeper hugs her for bringing Catherine back. Catherine comes out in a dress with her dog precious. Her mom arrives shortly after, taking over the conversion. Catherine looks annoyed, Clarice senses their issues.

Ardelia calls Al to run a lab sample. At dinner, Catherine upsets Ruth when she won’t eat her regular meal. She wants yogurt with a plastic spoon. Ruth yells at her. Clarice cuts in, explaining that this is all Bill.

Paul rushes home to find his kids scared. Mandy is in bed and not responding. Paul shakes her. She finally reacts. His son is scared. Paul tells his son it was ok that he called. Everything is going to be all right. They can stay with him tonight.

Shaan and Tomas have their warrants turned down. Meanwhile, Ardelia tells the team that Clarice’s guy is real and so was her lab evidence. Someone is trying to cover it up.

Clarice heads to see Catherine in her room. Catherine tells her she is going to see Bill’s mom. She also remembered Clarice crying and screaming in that basement. Clarice tells her that didn’t happen. She was in control, she shot him and then called it in. That’s not what Catherine remembers. Catherine packs to leave but doesn’t make it past the elevator.

Clarice heads back to be hypnotized. The team talks about evidence tampering. Clarice remembers sitting there and not pulling the trigger as Bill bled from the mouth. She realizes as the memories come, Catherine was right. She begins to cry. She finally sees the man’s face but tells the shrink she doesn’t know him.