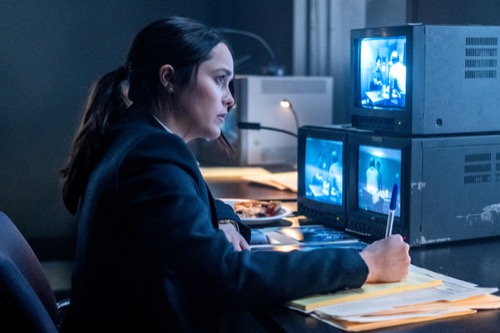 Tonight on CBS Clarice returns with an all-new Thursday, May 6, 2021 episode and we have your Clarice recap below.  In tonight’s Clarice season 1 episode 8 “Add-a-Bead,” as per the NBC synopsis, “Clarice feels an emotional tie to the victim when ViCAP investigates what appears to be the suicide of a medical student in the United States on a foreign visa. Also, Krendler secretly collects a DNA sample from the man he suspects attacked Clarice at Woodhaven.”

Tonight’s Clarice season 1 episode 8 looks like it is going to be great and you won’t want to miss it. So make sure to bookmark this spot and come back from 10 PM – 11 PM ET for our Clarice recap.  While you wait for the recap make sure to check out all our Clarice recaps, spoilers, news & more!

In tonight’s Clarice episode, the episode begins with flesh on a hook, there is blood and fire and then we see Clarice, she is with her therapist, Dr. Li, who asks her why she came to her and left her last therapist. Clarice says she couldn’t trust him, but she can trust her because she got her to a place. A place where she could remember. Clarice thinks back to when she was a child.

Her therapist asks her why she needs to see a therapist, Clarice says post-traumatic stress; Buffalo Bill, Marilyn Felker, Joe Huffman. Clarice says every agent manages it. She can help her process her trauma, but she can’t promise her that she will keep her job. Clarice says she is there today because of a body, Carolina, she came from Yugoslavia to study medicating there. She came to her yesterday, all alone.

24 hours earlier, Clarice arrives at the Department of Justice, Office of the Assistant US Attorney. She is with Tomas says they are there because Joseph Hudlin, the DC fixer, is involved in the River Murders. Clarice says four people are dead and she was almost the fifth.

Krendler is in his office, he gets another message from Joe Hudlin and he is supposed to talk to Murray, he made an appointment. Krendler looks at the message from Joe, it reads – found more on M – JH. Krendler runs out of the office, Murray sees him and says don’t blow him off. Krendler turns around, he says the river murders, don’t add up. Clarice swears she saw Hudlin at Woodhaven. Krendler tells him it is a dead end.

Ardelia is in Herman’s office, she tells him that she put all into learning DNA, building a database, and applying to a criminal investigation. He tells that good work should be rewarded in and of itself. There is no need for flashy articles, play the long game, that is what leaders do.

Clarice is in the morgue with Tomas, there is a young woman on the table, she is dead. Tomas says they can label it suspicious and get a full autopsy. She asks if they can get a medical examiner to help them quietly, he says yes, he will make a call. Clarice looks at the woman’s things, she finds a gum wrapper that looks like Hebrew written inside.

Krendler meets Hudlin and tells him not to call him on his bureau firm. Hudlin tells him when it comes to his divorce, moms always win. Hudlin says he is going to prove his value to him, the DUI that Mandy got out of a few years back, the kids were in the car. His guy at juvenile domestic relations district court thinks it is troubling. Krendler says, you must really need me Joe to which Joe replies, when I stop needing you is when it gets bad. He tells Krendler that it is an honor to represent him. Krendler picks up the pen that Joe leaves on the table, with a napkin and puts it in his pocket.

Tomas and Clarice are back in the office, they have an emergency contact for Carolina Savage, the girl in the morgue, Murray tells them to bring him in, his name is Tyson Conway. Murray is the one to question him, the guy who worked with Carolina. Murray shows him a photo of Carolina dead and tells him maybe a suicide. Clarice is watching the look on his face. He says he runs a non-profit, he brings in med students from impoverished nations so they can take the skills back home.

Carolina was the ideal candidate, she made him so proud of the work to do. He says it is long hours, hard work. They were trying to get her asylum and bring her husband here, but he was killed and she was devastated. Murray asks him if he always gets that close with people he works with. Murray lets him leave, he goes to see Clarice and Tomas that he is hard to read. Clarice says he knows more.

Krendler is in the drive-through to get lunch, his son serves him and asks what he is doing there, Krendler says he was in the neighborhood. Clarice tracks down Tyson, she introduces herself. He tells her that he brought Carolina out there. He asks her if Carolina wore a wedding ring, she didn’t have one on and they didn’t find one amongst her things. She asks if she would take her ring off, he says no, she loved her husband very much.

Krendler is in the car with his son, Jason is angry with him for not telling him that Mandy is an alcoholic, Krendler apologizes and says he is an alcoholic as well, he is fighting to get back.

Clarice called the local police, they did another sweep and found Carolina’s ring. Tyson said that Carolina wouldn’t take it off for anything. Then we see Carolina, she took off the ring and put it on a tree, then we see her body bloodied under the bridge.

Murray looks at the numbers on the gum wrapper, he says it is a bank routing number. Clarice and Tomas head to the back, they find Carolina’s safety deposit box. Clarice finds an ultrasound photo of the baby, Clarice wants a pregnancy test on Carolina.

Ardelia finds out that the DNA task force that her work helped fund is being launched without her. Later, Ardelia attends a Black Coalition meeting.

Krendler gives Murray the pen to run for DNA.

Clarice is with Dr. Li, they talk about her upbringing, how relatives couldn’t take care of her so they put her in an orphanage, just as she is making a breakthrough, her phone rings and she leaves.

Clarice is back at the bureau, she sees Tomas with Jessie, the assistant medical examiner that he has been dating for two years, they keep in quiet.

Krendler tells the team that Hudlin has him in a vice, VICAP was about to go down, he had a motive to make that go away. DNA says Clarice was right, Hudlin was the one who assaulted her at Woodhaven. Clarice says they keep going, they can get more.

Carolina’s fetus had the same abnormalities as those from the clinical tests.

Krendel says they tell no one about this, it is between them.