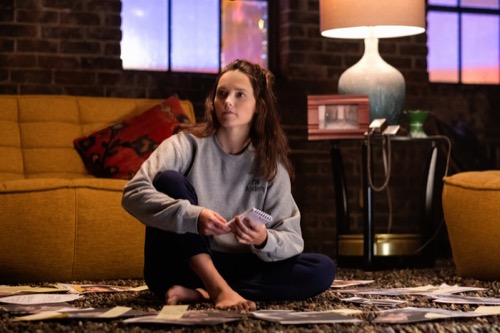 Tonight on CBS Clarice returns with an all-new Thursday, June 10, 2021 episode and we have your Clarice recap below.  In tonight’s Clarice season 1 episode 10 “Achilles Heel” as per the NBC synopsis, “Clarice zeroes in on the entity behind the River Murders, Alastor Pharmaceuticals; the team rushes to Alastor to prevent the purging of any incriminating evidence; Clarice questions the CEO of Alastor Pharmaceuticals.”

Tonight’s Clarice season 1 episode 9 looks like it is going to be great and you won’t want to miss it. So make sure to bookmark this spot and come back from 10 PM – 11 PM ET for our Clarice recap.  While you wait for the recap make sure to check out all our Clarice recaps, spoilers, news & more!

In tonight’s Clarice episode, Clarice’s memory is tormenting her. She was struggling to remember everything that happened with her dad and if it wasn’t that then she’s remembering Joe Hudlin. Hudlin beat her as she was asking for help. She was being locked up and experimenting on but there he was and she begged him for help only to find out he was in with the bad guys. Hudlin was the real danger. Clarice knew the truth now and she and her team profiled him.

He was a narcissist. He killed a hitman in full view of federal agents and he was swanning about in a room full of comatose patients. Hudlin is a bad guy. He’s dangerous and he was even threatening Krendler’s family. Krendler was fighting his alcoholic wife for custody of his kids. And Hudlin was the sort to make sure the drunk would have access to impressionable minds.

Hudlin is a lawyer. He’s also a fixer for Alastor Pharmaceuticals. The company hired someone to kill anyone who had tried their drug and who ended up having children with birth defects. The people who became whistleblowers had been trying to turn on the pharmaceutical company.

They had been trying to get their stories out there and to tell the world their children were harmed on this prescription that was supposed to be safe, but before they could talk, they were killed, and then their killer was killed and the reason for why the coverup had to be buried was because of a merger. Alastor Pharmaceuticals was merging with another company. It was going to bring money in for everyone and that’s why Hudlin was fighting so hard to protect it.

Julia was their woman on the inside. She warned the team that the merger was going through and that they had to start fighting back now. Krendler thought about it. He decided to go public with their investigation and this meant bringing Ruth onboard. Ruth was upset with Clarice. She ordered Clarice to cover up the fact her daughter committed a crime and Clarice ignored her. Clarice knew that Ruth’s daughter Catherine needed serious help.

She turned her in for breaking into Buffalo Bill’s mother’s home and for pulling the gun on the woman. Catherine had been held prisoner by Buffalo Bill. He tried to fatten her up as a means of having more human-made leather for himself and so he was a bad dude. And his story ended when Clarice killed him.

Only Catherine couldn’t let it go. She needed someone to blame for Bill’s actions and she chose his mother. The same mother that didn’t raise him or had anything to do with how he turned out. That poor woman was close to being tortured by Catherine but Clarice stopped her and Clarice turned her over to the police. Catherine later spoke with her mother. She thanked her mother for sending Clarice after her because Clarice helped her by turning her in.

Now, the investigation into such a large company meant there was going to be an even bigger target on her back. Ruth was doing her best to handle it all while Clarice was sent to question Hudlin. Clarice profiled Hudlin. She also profiled Nils Hagen. Hagen was the big boss and he was also Ty’s father. Ty didn’t meet his father until he was almost an adult. His mother had tried to keep him separate from them and so Ty was raised mostly by his mother until she died.

Ty did his best to tell Clarice about his father. He told her why he doesn’t think the merger will ultimately make him happy and so Clarice went to the company. She spoke with and toyed Hudlin until Hagen asked to see her. He wanted to see her alone.

He didn’t want the other two federal agents to come with her. Clarice agreed to meet with him and he immediately asked her how she knew about the merger. The merger is in its final stages. They couldn’t risk the other company getting spooked and so Hudlin threatened to sue if the merger was released to the press, but there was nothing he could do against the FBI and the team had another problem on their hands.

It was Julia. Julia went snooping and she found a dossier to prove that Alastor knew everything about what the drug does to a pregnant woman and they hadn’t pulled it off the shelves or stopped the women from taking it. Julia began faxing these documents to the FBI and she was caught.

Julia was being escorted off the floor right as Clarice got somewhere with Hagen. Hagen never expected he would be a father and he’s possessive of Ty. He considered him “his”. The company is also his and he told Clarice that she wouldn’t be able to bring him down because she was used to pest control and she was the bug that got away. Hagen got called away by Hudlin, while they were talking Clarice noticed that the third person was the same cop who delivered an item to the team. It turns out Hagen has been spying on the FBI. This is why he and Hudlin were so concerned about how news of the merger got out. They initially thought it was Ty and then they knew it was Julia once they found her on the wrong floor.

Clarice and her team raced to save Julia’s life. They stopped a dirty cop from killing her and Julia managed to get them all the documents. She mailed them once she saw she was about to be caught. She mailed them to her grandma. The team will have it in 30 odd business days and so Julia really did save the day.

Ardelia and her fellow black FBI Agents were now feeling the squeeze since their lawsuit has come out in the open. They’re all being arranged in the worst positions possible as a means of forcing them out and Ardelia had to watch as her own boss was doing his best to gaslight about how bad things are.

Clarice still isn’t sleeping. She tried talking to Ty and Ty asked that she no longer call him. He doesn’t want to be around the woman intent on taking down his father. And so the only one Clarice could talk about things her father did was Ardelia. Ardelia and Clarice remain the best of friends.

While Hagen called Ruth to basically demand she end the investigation into him or he was going to hurt both her and her daughter Catherine.