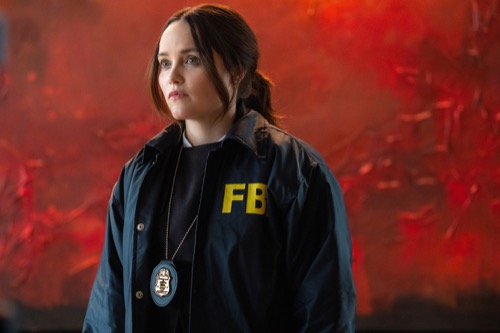 Tonight on CBS Clarice returns with an all-new Thursday, June 17, 2021 episode and we have your Clarice recap below.  In tonight’s Clarice season 1 episode 12 “Father Time” as per the NBC synopsis, “As the team finally gets the green light to raid Alastor Pharmaceuticals, Clarice punches another FBI agent in a moment of rage, then willingly turns in her badge and gun; the rest of the team uncovers the whole truth about the River Murders.”

Tonight’s Clarice season 1 episode 12 looks like it is going to be great and you won’t want to miss it. So make sure to bookmark this spot and come back from 10 PM – 11 PM ET for our Clarice recap.  While you wait for the recap make sure to check out all our Clarice recaps, spoilers, news & more!

In tonight’s Clarice episode, the episode begins Clarice in therapy, she says is too busy doing her job and doesn’t need the SOS calls from her conscience. VICAP gets the green light signal to raid Alastor Pharmaceuticals. Krendler tells the team to dig deep to get to the top; they head out. Inside Clarice starts going through files, Shaan mentions a famous painting that is on the wall, the two take it down.

Outside the company is holding a press conference, Krendler walks up to Hagen who walks around with an oxygen machine and gets plenty of sympathy from the press. Krendler puts handcuffs on Hagen and takes him away.

The painting is back at the bureau, it is original and extraordinary. It is a commissioned painting. Krendler says the US attorney asked them to cut Hagen lose an hour ago. He then tells Clarice and Shaan to go see the artist, see if she has anything to say. If they don’t tie Hagen down indirectly, he is flying out to a private island soon.

At the Hudland residence in Arlington, VA., Joseph is dropped off at his house. Meanwhile, Clarice and Shaan are at Eva Gallows’ house, the artist who did the painting for Nils Hagen. She says that Nils paid her a lot, he controlled everything. In the end, he just wanted a canvas with her name on it. She says it was a job and she did it.

Joe is at home, he notices some cards drive up to his house, he looks nervous. Krendler gets a call from Joe, he tells him that he wants him to tell his daughters that he never did any of the sexual stuff, he even tried to help Carolina, he gave her money and a place to stay. He doesn’t want his daughters to think he was a sick monster. He never touched any of those women. He wanted his family to be ok. Then we see men storm into Joe’s house, a needle is put in his neck and he is dead, files are stolen. A gun is planted in his hand and his death is made to look like a suicide when it is put in his mouth and the trigger pulled.

Vicap is on the scene, so is Violent Crimes and an argument ensues. A suicide note was left, they thought of everything. Violent Crimes is about to leave when one of their team insults Clarice, Krendler tells Tony to get his guys out of there before they all get written up.

Krendler tells Clarice that he knows she was provoked by Eddy, but she has to take it in stride.

Global Health Horizons, Washington, D.C., the Vicap team are going through some files. Clarice works on Ty, she tells him that Hudland is dead, TY says everything went bad when he showed up. She goes on to say that his father sells a drug that he knows causes birth defects that is not what a good man does.

Clairce is now with Eva, she says she had shows that had good reviews but she couldn’t breakthrough. Nils Hagen took an interest, she was so hungry, he put her up in this amazing loft. He was controlling, by the time she realized how bad it was she couldn’t get out. He wanted children, with her. He wouldn’t use birth control, he wouldn’t let her. But, she has known since she was fifteen that she couldn’t have kids, and she told him, he was angry and she was afraid. One day he came into her room, he said he was going to commission her to do a painting, then he would let her go. His blood is on the painting. He is a dream for a shrink, but she just wanted out. There looks like there is something under the paint, Clarice goes to investigate, she takes off a piece to do a test on it.

Clarice is back with her therapist, she says she must have been angry to hit Eddy. Clarice returns to the office and speaks to Krendler, she tells him the day she got there was the best day of her life, but something has changed her, she is seeing red like a monster. She can’t be the agent she has to be and it is killing her. He tells her to take a minute, take a run, clear her head, but do not quit. If she stays, she tells him it will kill her.

Rebecca sees Clarice leaving, she said when she saw Nils Hagen in handcuffs she knew she had to step up. Clarice tells her it is not her case anymore.

The painting is confirmed to have been painted in Nils Hagen’s blood. Clarice goes for that run, she goes over in her head again her therapy session where Dr. Li tells her that she already knows the truth, a memory that she already has. All of a sudden, Clarice falls and hits the ground, rolls over. She turns around stairs up at the street light. We then see a younger Clarice, she is given an envelope full of money to give to a man who tells her that her daddy is a coward.

Then the man says her daddy is a thief when he sees that there are one-dollar bills in the envelope, he pulls a gun out and puts it on Clarice’s head, and tells her father that he should shoot her. Back to the present day, Clarice gets up from the ground, she is crying. When she gets back home, she takes a necklace that her father gave her and throws it across the room.

Vicap does some tests on the painting, there is DNA from five different fetuses’ on it. Three female, two male. They all had different mothers, but the same father. They all had severe abnormalities, they probably wouldn’t make it to term. Karolina Savich’s baby was also tested, that baby also had developmental issues. Nils Hagen was the father of all these children. They figure out that Conway was trafficking women for his father. All of a sudden, Conway is ringing the bell at Clarice’s place, she lets him up.