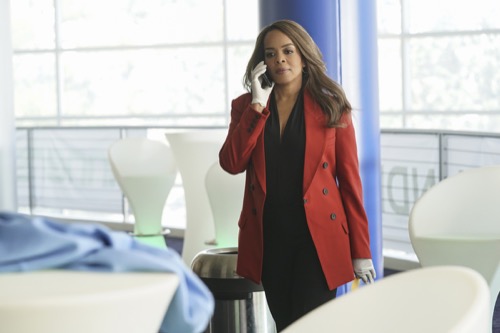 Tonight on CBS CSI: Vegas premieres with an all-new Wednesday, October 20, season 1 episode 3 called, “Under the Skin” and we have your weekly recap below. In tonight’s CSI: Vegas episode as per the CBS synopsis, “Grissom and Sara’s investigation into charges against David Hodges heats up as Internal Affairs joins the hunt.

Also, pressure rises for the CSIs when a video game developer’s body is found floating in a fountain before a huge gaming tournament.”

Tonight’s season 1 episode 2 looks like it is going to be great and you won’t want to miss it, so be sure to tune in for our live coverage of CBS’s CSI: Vegas recap at 10:00 PM EST! While you wait for our recap hit the comments and let us know how excited you are so far with this season.

In tonight’s CSI: Vegas episode, a woman was killed. The victim’s name was Sandra King and she was stabbed to death before being left in a fountain. She had been out that night to meet up with her friend. They were going to go jogging together. It was the friend who found her, but the friend also saw the two people who did this. They were wearing hoodies and were in all black. One of them had been wet.

He must have gotten splashed when he was stabbing the victim in the fountain and so it’s a good thing her friend hid when she did. She saw two men running in the dark alley. She hid for self-preservation and she was saved from running into the killers. It also stopped her from getting a good look at them. the friend didn’t know who would do this. And yet King’s death was big news in Vegas because she was a wealthy videogame designer.

King was stabbed several times. She managed to scratch the person attacking her and so they do have the DNA of one of her killers. But the killers made one crucial mistake. They left her fitness tracker. It alerted the CSI team that she wore one and so they used to track her movements.

They knew there was an event five hours before King died. She had been at her office during that time in an area called the green room and so the CSI team went there when they found the remains of her badge ID. It seems someone ripped off of her neck. Its what left the bruise impression around her neck and so the ripping off was done violently by someone raging. Maxine Roby passed on the information to the police detectives working the case.

They found some gamer. He makes a lot of money playing the games and he got banned from it for breaking the rules of conduct. He had gotten so upset he made a video about how “b*tches” needed to stop ruining things. His profile name is BodyCount and BodyCount only admitted to ripping off the badge.

He said he didn’t kill King. He also showed that he didn’t have any marks on him and so he couldn’t be her killer. But the killer was devious. He created 3D impressions of knives used in the game to kill her and he left behind the impressions. He was also seen on ATM cameras. The killer was King’s partner Ben Miller or so everyone thought until they checked him for marks. Miller didn’t have any defensive wounds.

Another tip off that it wasn’t Miller. There was an eyewitness to the crime. One of the men running had been an eye witness and he ran because he was afraid he would be next. The eyewitness saw a man who looked like Miller. He also said that King hit him with a punch and the team suspects the punch knocked out the contacts. The ATM picture showed a guy who looked like Miller with one blue eye and one brown. The real Miller has brown eyes. Someone dressed up to look like Miller to kill King. He also made sure to turn his face towards the camera as he was leaving. Someone was clearly trying to frame Miller for King’s death. The only thing the team had was DNA and a footprint match. They used the killer’s footprints to determine his regular gait and that led them to Ron. Ron worked for both King and Miller.

He also experienced a recent setback. Ron developed a game for a competition in the company and he got beat by someone else’s game and so it was going to be this other person who has their game released by the company. But Ron played it smooth. He pretended not to be upset. He tried to claim he would keep working on his prototype until it was ready to be released and all the while he plotted to get rid of his bosses in order to get his game in through the backdoor. Roby and her team went to Ron’s mother’s house. She let them search without a warrant and they found the Miller mask that Ron used. They also got DNA from inside the mask to mark that Ron used and so Ron was later arrested.

Ron was asked why he did it. He said they kept pushing off releasing his game because female coders sell better and that it was all an conspiracy. Ron was just disgruntled employee prepared to blame everyone other than himself. He never thought if his game wasn’t good enough. He simply assumed because his misogyny outweighed common sense. Ron was arrested. He was going to face life in prison. While Hodges’s case had taken a turn. They found out the person who broke into his house to steal his things had killed the neighbor’s dog in order to avoid detection and that the dog had bit the guy. They couldn’t get enough DNA to find him but they now know they’re looking for a South American man in his late forties to early sixties.

And Gil was admitting to the fact he’s suffering from land sickness. Which might affect how he’s able to track down evidence.