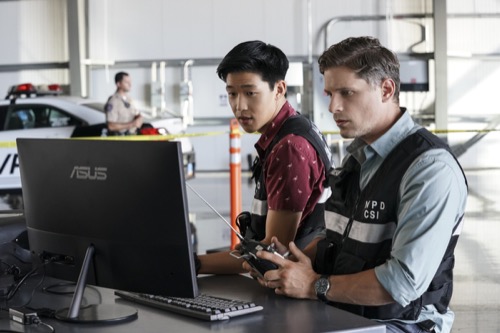 Tonight on CBS CSI: Vegas premieres with an all-new Wednesday, November 3, season 1 episode 5 called, “Let The Chips Fall” and we have your weekly recap below. In tonight’s CSI: Vegas episode as per the CBS synopsis, “As Grissom and Sara close in on who framed Hodges, the CSI team investigates a lock room murder mystery at 30,000 feet, when a cargo plane lands autonomously at McCarran Airport and everyone on board has been killed.”

Tonight’s season 1 episode 5 looks like it is going to be great and you won’t want to miss it, so be sure to tune in for our live coverage of CBS’s CSI: Vegas recap at 10:00 PM EST! While you wait for our recap hit the comments and let us know how excited you are so far with this season.

They look in the back of the plane. There are boxes and they have been looked through. Maybe someone was looking for something. They find an axe on board as well. There has to be evidence.

Grissom and Sara work on their own case, arriving at a rural site. They look for remains. Back at the morgue, they notice one of the men on board had no defensive wounds and had stage 4 cancer. Maybe he isn’t innocent. They check his luggage and find a ticket. They track the ticket and have an idea that someone was smuggled onto the plane in the luggage.

Grissom and Sara realize they are missing bones. Their case involves a coroner whose autopsies are questionable. FBI agent goes with Rajan and Folsom to the suspect’s last known address which happens to be the same house as their pilot with lung cancer. They are related. Their suspect is named Gary. Folsom hears a kid crying. Its the man with his lung cancer’s child. He tells them Gary dropped off a snow globe after hearing about his dad. Folsom borrows the globe.

Maxine does some additional work and finds more prints. They have another suspect. Meanwhile, the coroner comes to meet Sara and Grissom. He knows they suspect he is doing something wrong.

Maxine has a meal with the FBI agent. They discuss her dedication to her job and staying single. Gary comes in. Maxine did some research. He eats at the restaurants alot. They question him. He doesn’t give them too much. They need to find their female accomplice.

Maxine catches up with Grissom and Sara. She grants them the ability to get a warrant. Meanwhile, Folsom visits the young boy and notices his caretaker has dirty fingernails and defense wounds. They bring her in. They have to release her when they don’t have enough evidence. Folsom plans to get it though.

Rajan helps Folsom reexamine the plane. He finds a tag that connects her to using her taser on the plane. It was the dying pilot who activated the self landing mechanism.

Grissom and Sara are called to a scene. The coroner that where ready to search is dead. They have a new suspect to find. After, Gary meets with Folsom. He thinks Gary would make a great dad. He is all the boy has left. Grissom and Sara find something promising at the scene.