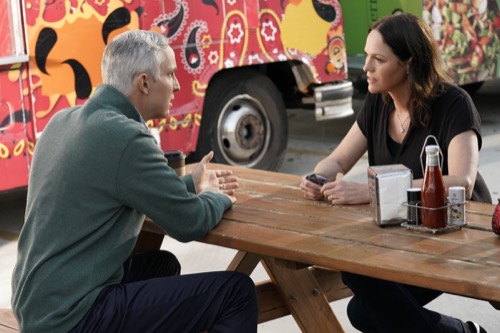 Tonight on CBS CSI: Vegas premieres with an all-new Wednesday, November 17, season 1 episode 7 called, “In The Blood” and we have your weekly recap below. In tonight’s CSI: Vegas episode as per the CBS synopsis, “An abandoned horse covered in blood leads the CSI team to a halfway house for convicted murderers. Also, Grissom and Sara begin to circle their prime suspect in the David Hodges case.”

Tonight’s season 1 episode 6 looks like it is going to be great and you won’t want to miss it, so be sure to tune in for our live coverage of CBS’s CSI: Vegas recap at 10:00 PM EST! While you wait for our recap hit the comments and let us know how excited you are so far with this season.

In tonight’s CSI: Vegas episode, a horse covered in blood was found at a hotel. The sheriff department was called. They called the Crime Lab because a bloody boot was found still in the stirrups and so everyone believed someone was out there in danger if not dead. But they just didn’t know who. It was clear that whoever was injured had lost a lot of blood. They were estimating three pints of it.

They didn’t believe the owner of the boot had longed to live and so they did everything to find the person down. Folsom was put in charge of the horse. He trained to a large animal vet and so he has experiences around animals. He determined that the horse was a show horse because it did certain exercises. And from there, they were able to find the chip in horse.

The horse was registered with the American Equestrian League. He was also reported missing several months ago back in March and so they questioned the horse’s legal owner. Mr. Locke hadn’t seen the horse in a year. He said there’s no telling what he’s been up to. He trained the horses to jump fences and he thinks that’s what happened. Mr. Locke did report the horse missing.

He collected an insurance fee, but he didn’t have anything to do with the horse after it was missing and he could prove that because he didn’t bring in all the money he would have made from stud fees. Mr. Locke was no help. Folsom and Allie took some deputies out on horses and they physically went looking for the man whose blood was found all over the horse.

They determined it was man through genetic testing. They also know he’s shorter than six feet and is Caucasian. The group followed the blood trail back to the victim. They found him dead and it looked he was shot then stabbed several times as part of a ritual. Folsom and Allie documented it. They also went to the ranch where the victim was working and that’s where they learned that Ranchero Comenzos was a halfway house for teenage offenders.

The teens were all convicted for homicide. They were all killers and they were all in one place. They all knew the victim. The victim was Emery Hollis. He owns the ranch. He began it after his son became a violent offender and ultimately killed himself.

Hollis thought he was doing something good by taking in those kids. Making sure they had a roof over their heads and were going to therapy. But it began looking like one of those kids killed him. Hollis had one remaining son named Corey and Corey called his father a saint.

Corey also said he never saw his father open the gun safe. He therefore doesn’t know if anything is missing and so Allie went looking for the gun in the kids’ rooms. She didn’t find one. Folsom went looking for the other murder weapon and he couldn’t determine how one weapon was able to do so much damage. Both he and Allie were at a loss when they found a bloody t-shirt in one of the trash cans. It belonged to one of the teens.

It also had Hollis’s blood on it. The kid was brought down to the station and he said that he got Hollis’s blood on it after Hollis was involved in a car accident and he tried to help him. He also said he tried to ditch the shirt because he knew it would look bad. But this is the same kid who murdered his parents. He said his parents were horrible and that Hollis wasn’t like that. Roby did a blood analysis on the shirt. The blood turned out to be three weeks old and so the kid was telling the truth. He had just put in the hamper and forgot all about it. The Crime Lab also checked into horse breeding and it turns out that there was a gap after the horse went missing. And that someone started breeding the horse again last month.

Hollis was breeding the horse. He was even selling the horse’s specimens with the horse’s actual name and so he knew for a fact where the horse came from and he didn’t return him. He instead tried to keep the horse to make a buck. This made Locke look guilty again. They brought him in for questioning and he confirmed he did find out the horse was being bred again. He confronted Hollis.

He even rammed Hollis with his car and that’s how Hollis got injured three weeks ago. But Locke tried to claim he didn’t go as far as to kill Hollis and the team didn’t believe him. If anything, Folsom became convinced he knew how Locke killed Hollis. He shot him on the horse to incapacitate him. He then beat him to death and there was something odd when he tried to prove it.

Folsom determined the killer was missing a finger. Which couldn’t fit Locke because he has all his fingers and yet it fill Hollis’s son Corey. Corey was the violent one. Not his brother and he probably killed his brother as well as his father. Hollis didn’t know the horse was being bred and so he found out what Corey was doing when Locke threatened him. He then confronted his son.

He probably even told him that he was going to return the horse and that’s when his son went after him. The Crime Lab solved the case. But they now face a bigger dilemma. Roby was demoted after it came out she contacted the Washoe Crime Lab to find out about the Hodges’s case and so now she faced unpaid suspension. And she will no longer be head of the Crime Lab.

But Grissom, Sara, and even Chris made a breakthrough. They spoke to Anson Winx’s sister because she was the sister of the man they suspected framed Hodges and it turns out she knows. She knows everything. She bragged about it before she told them that they couldn’t prove a thing. The world no longer believes in evidence. The world denies science even and so no one is ever going to believe Hodges is innocent after her brother is done with him.