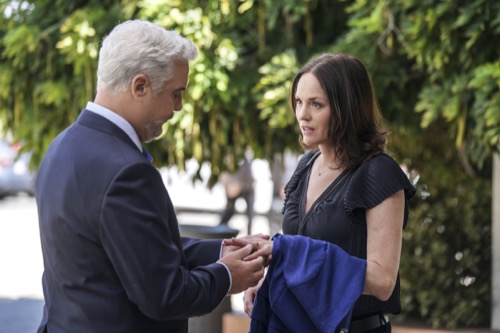 Tonight on CBS CSI: Vegas premieres with an all-new Wednesday, November 24, season 1 episode 8 called, “Pipe Cleaner” and we have your weekly recap below. In tonight’s CSI: Vegas episode as per the CBS synopsis, “When the CSIs are called to investigate human remains found in a convention center owner’s bathtub, Sara and Grissom use the case to get close to attorney Anson Wix’s star forensic expert witness, just days before David Hodges’ trial begins.”

Tonight’s season 1 episode 8 looks like it is going to be great and you won’t want to miss it, so be sure to tune in for our live coverage of CBS’s CSI: Vegas recap at 10:00 PM EST! While you wait for our recap hit the comments and let us know how excited you are so far with this season.

In tonight’s CSI: Vegas episode, Maxine Roby was demoted. She contacted the lab in charge of the David Hodges’s case and her bosses found out about it. There’s no telling how they found out. But Roby was reprimanded. She was also demoted and she’s no longer the head of Criminalistics. She’s been suspended indefinitely. The undersheriff was now in charge of the Crime Lab and he didn’t waste time to renovate. He cleaned out Roby’s office. He didn’t want to keep looking at photos of her son and that in itself says a lot about him.

The undersheriff was calling the shots now. He was the one who assigned the Crime Lab to a case and he gave them the Erik Shaw case. The case involves Erik Shaw He’s a homeowner and he was suspected to be a victim of a murder because a couple broke into his house to steal his safe and they called the cops on themselves because they found a body in goo in the upstairs bathroom.

It seems someone was trying to liquify the body. Shaw got into a fight with someone in his bathroom and then that person managed to kill him. Put him in the bathtub. Then pour acid over his remains and that’s why his remains were now goo. Shaw owns a convention center. He was in business with a lot of shady people and he and his wife were separated. His wife and now widow was found at a pageant show with their two daughters.

The team notified the family. Mrs. Shaw asked to see the body and they told her how that wouldn’t be advisable. The only thing that remained of the remains themselves was some piece of the skull. They also went digging through the goo where they found two femurs.

But the femurs were of the same leg. There was more than one body in the goo and so there’s no telling who else was in the tub when the acid was poured. There were two suspects. One from the pageant world and another was a doomsday prepper. What they had in common was that they were both suing Shaw when he died. They also were both extremely tall.

They stood over six feet five and they hated the victim because he was cooking his books. Shaw was defrauding plenty of people. The only one who didn’t seem to hate was his ex-wife and it was because she still had hoped for a reunion. She also said she was still grateful towards him because he gave her the kids. And while they were looking for another victim, Sara’s ring came off in the goo.

Sara’s ring was slipping off every time she took off her gloves. Her husband thought she could eat a sandwich every now and then because starvation wouldn’t help Hodges. The team was looking for her ring in the goo when they got some DNA off of the veneers and it turns out it belonged to the pageant guy. Chase Starr was in fact his twin brother Grayson Starr.

They own a business together and Grayson couldn’t work in the pageant because one of the stage moms has a restraining order against him. But Grayson didn’t kill his brother or Shaw. He had an alibi and both Allie and Folsom noticed that Shaw’s widow has a chemical burn on her leg. They looked into her. They found out she works for a company that sold the chemicals needed to dissolve a body and that company was missing the items.

Mrs. Shaw said she stole those items for Chase. The real Chase. She and Chase were seeing each other and they were in love. She had no idea what he was going to do with those items. She also doesn’t have a way to prove she didn’t have a hand in the death of the two men in her life and so the Crime Lab continued to look for evidence. The doomsday prepper wasn’t panning out. They found a bullet in the goo and they know one of the men was shot. They also know that the killer tried to cut up the body before he or she gave up to dissolve the body in acid. Only the doomsday guy uses bullets he makes himself and he said his fingerprints were the saw because he gifted it to Shaw back when things were good.

Mrs. Shaw also couldn’t have forced two big men into the tub. She was too petite and so Grissom had an idea. He posed a theory. They tested it and they were able to confirm that only one of the men was killed. Chase was pouring the chemicals when it created an explosion. It blew him back where he hit his head on the wall and they he fell into the tub. Chase killed his girlfriend’s husband. He then accidentally killed himself and the District Attorney couldn’t prove that Mrs. Shaw knew what she was doing when she stole those chemicals and gave them to her boyfriend. But Folsom suspects she knew. He couldn’t do anything about it but he suspected and unfortunately they had nothing else to hold over Mrs. Shaw.

She was released. She will return to her children and her husband and boyfriend are now out of the way. While Roby hasn’t been idle during her suspension. She continued to investigate the Hodges’s case and thanks to Sara who went digging through Anson Winx’s garbage – they were able to find one of Winx’s allies and now they just have to lean on him in order to get him to turn against Winx.