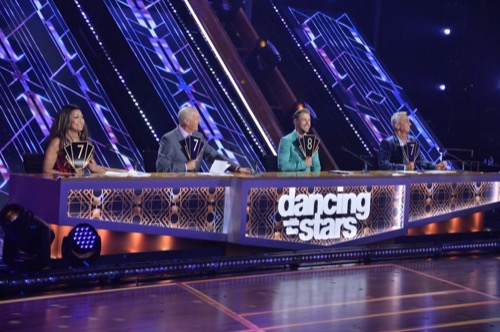 Tonight on ABC the glitz and the glimmer finally return to the ballroom as Dancing With The Stars when season 30 episode 5 of DWTS airs! We have your all-new Tuesday, October 12, 2021, season 30 episode 5 Dancing With The Stars recap below! On tonight’s DWTS Season 30 episode 4 “Disney Villains Night,” as per the ABC synopsis, “The magic of Disney Week will transform the ballroom as the remaining 13 celebrity and pro-dancer couples take on iconic Disney characters across two nights with “Disney Heroes Night”.”

Tonight’s episode begins with Tyra dressed as an evil queen. Nobody was eliminated last night, but tonight, there will be a double elimination at the end of the show.

Judges Comments: Len: “I liked the concept, the story within the dance of Captain Hook fighting Tinkerbell. I thought the lifts were right in character. You are surprising me every week, well done.” Derek: “I am so impressed with you Jimmie, that side by side, you jumped up there, it had so much energy. You are transforming on this show and I love to see your progress.” Bruno: “You got me hooked, that was a great routine. You were totally in character, your strongest performance to date.” Carrie Ann: “Disney is totally your jam, I can tell you love it, it came through in both of your dances. That was amazing.”

Judges Comments: Derek: “You guys had the least amount of rehearsal time this week. You had the flare and the gusto, technically there are still things to work on. Overall great performance.” Bruno: “You were irresistibly dashing. I am so happy to see you in the full production exploiting your talent. You can work a stage.” Carrie Ann: “Thank you, you were bold and polished, so animated. Cheers to you.” Len: “I congratulate you, natural reverse turns, well done to both of you, great job.”

Judges Comments: Bruno: “Magnificent, you got plenty of drama. It was so haunting, there was a quality that I loved, like you were weaving a spell.” Carrie Ann: “That was your best dance by far. The transformation that we were looking for, you were the queen of evil, sensual, powerful, the continuation of the movement, so sensuous, I loved it.” Len: “I liked he mood, it created a fantastic atmosphere. You could have added a little bit more of the Viennese waltz.” Derek: “Big props for you for having those thorns, you handled them beautifully, well done.”

Judges Comments: Carrie Ann: “You are fantastic, I love your energy and dedication. This week I didn’t think that was your best dance, I thought it was a little hectic. I am looking for transformation, I think you went back to old tricks and old habits, I like when you have more elegance.” Len: “I loved that it had control, fantastic.” Derek: “I think the hecticness was the hair flying around. I agree with Len, it was in control, it had the power.” Bruno: “It was like watching two super villains fighting for supremecy. I paso doble like no other.”

Judges Comments: Len: “The technique wasn’t great, basically it was a lovely dance in three four time, it was done very well.” Derek: “This evil queen was a vibe, sultry, seductive. You are fierce, you just need to believe that a little bit more.” Carrie Ann: “I am so impressed how you kept on your center. However, your foot came off the ground, but that was your best dance.”

Judges Comments: Derek: “I am kind of speechless, that was really good. The opening and ending lift was iconic, that control. I felt that in the room, well done, it was really good.” Bruno: “People at home, no special effects, no wires, a feat of magical strength.” Carrie Ann: “I am truly blown away, that was magical, it was poetry in motion. It blew my mind.” Len: “I am not the highest judge, but that was your best judge.”

Judges Comments: Bruno: “When it comes to deliver, it was wickedly delicious. Nobody does it better.” Carrie Ann: “So theatrical, this is what we want to see, you were amazing. It was a hair safe.” Len: “That had wit, charm, it was truly delightful.” Derek: “That was theatrical, you were amazing.”

WWE superstar The Miz (“Miz & Mrs.”) and pro Witney Carson dancing the Argentine Tango to “Be Prepared” from “The Lion King”

Judges Comments: Carrie Ann: “The men are on fire tonight, what is happening, that was incredible. What I loved most about this is the way you channeled your energy.” Len: “Be prepared, I wasn’t prepared for that. I liked the lifts, lovely, theatrical, well done.” Derek: It is tens across the board for your commitment to the costumes, it was so fantastic, great job.” Bruno: “There was so much content, in general very good, great performance.”

TV actor Brian Austin Green (“Beverly Hills, 90210”) and pro Sharna Burgess dancing the Paso Doble to “He’s A Pirate” from “Pirates of the Caribbean: The Curse Of The Black Pearl”

Judges Comments: Len: “I like the aggression, the fight scene, I would like if you could lift your diaphragm a little bit, don’t hide your free arm.” Derek: “I loved the dance fight, it was fun to watch. Well done for staying focused.” Bruno: “You were great tonight, fully loaded, try to control your free arm, you are going in the right direction.” Carrie Ann: “You are definitely in it to win it, I am proud of you.”

Judges Comments: Derek: “I was feeling you man, your face, you were right into it. Great job.” Bruno: “Nothing snakey about that, that was a solid performance. Power, intent, content, you can do it, just refine now.” Carrie Ann: “I felt like you gave us all. Your steps, you have to find a happy medium because you are so tall.” Len: “In a paso I saw a little bit of the key elements but you could give me so much more.”

Judges Comments: Bruno: “I am having so much fun, you captured the spirit of the movie perfectly. You are getting better as a dancer, but we know you can act as well.” Carrie Ann: “I am impressed with the acting, I feel like it was a little safe for me. I encourage your growth.” Len: “I could have danced for joy, this was a joyous performance.” Derek: “I can’t believe you have never danced before, you are a natural born performer.”

Judges Comments: Carrie Ann: “You are finally going there, the articulation, the energy. I felt the performance met the technique, well done.” Len: “You look so good in hold, get more of that.” Derek: “I am still recovering from Sasha running off as a cat. Your performance is starting to come out, well done.” Bruno: “Bewitching my darling, those long lines. Whatever the spell is, keep it going, it is working.”

Judges Comments: Len: “It a feeling of menace which I like to see. Lovely interpretation, don’t look at me when you are dancing, it scares me.” Derek: “You are so good, overall that was phenomenal.” Bruno: “It had a hint of danger, a slight step, otherwise it could have been perfection.” Carrie Ann: “That was powerful and masterful and so devine. A beautiful way to end the night.”

Time for some results, in the bottom three are: Brian and Sharna, Matt and Lindsay, Kenya and Brandon.

The couple with the lowest combined scores and leaving the competition now is Brian and Sharna.

Matt and Lindsay are eliminated.