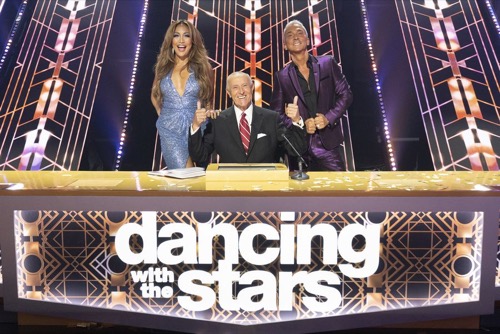 In addition to an exciting opening number set to the song “Grease” and choreographed by award-winning Kathryn Burns, special appearances include Frankie Avalon singing “Beauty School Dropout” live in the ballroom as well as a surprise appearance by an original Pink Lady herself, Didi Conn, who played Frenchie in the film.”

Tonight DWTS’ episode begins with a medley of dancers dancing to Grease. It’s Grease night on Dancing With The Stars. Four time Grammy winning Olivia Newton John appears via video and wishes everyone well tonight. All the songs tonight will appear in order of Grease.

Judges Comments: Len: “I think if Sandy and Danny were to dance a Fox Trot it would look a lot like that. It was full of fun and entertaining. Olivia you are becoming ne heck of a dancer, Val your choreography is just great.” Derek: “I can tell tonight is going to be one of my favorite theme nights, Olivia you are a perfect Sandy, your frame was spot on.” Bruno: “As an opening number your style is nice, you captured the sweet innocence of Sandy.” Carrie Ann: “I echo everything my fellow judges say but your body contact was amazing, your technique was amazing and you brought Sandy to life the right way.”

Judges Comments: Derek: “You are the gift that keeps on giving. That was intro was straight out of the musical. Push away a little up at top, but otherwise it was amazing.” Bruno: “You got the part, you are hired. You put some bump and grind in there and I liked it, it enhance the character, you did so well.” Carrie Ann: “Last week I know I said it was safe, but this week we didn’t know where you were going next and everyone wanted to do the dance with you. Excellent job.” Len: “You just didn’t dance that fantastically well, you acted the part, there was a great connection between you. I feel better for seeing that.”

Judges Comments: Bruno: “I could really feel the sense of a love story. Plenty of love and devotion in there. Don’t dance down to her though.” Carrie Ann: “Your knees are where her hip is, this dance wasn’t the best for you. I love the chemistry that you bring.” Len: “It has a gentleness that I liked so much, your technique isn’t great. You try so hard that I find it hard to criticize you.” Derek: “I love you, I love watching you. As a judge we have to judge but that was great.”

Judges Comments: Carrie Ann: “That was the ultimate performance that anyone woud want to do. You matched the energy, you thrilled us. I loved it.” Len: “I thought one or two of the steps were problematic but overall it was high octaine full on jive, you just rushed it a bit with the excitement.” Derek: “I look forward to seeing your performances, tonight you lost a little bit if clarity but it was so much fun.” Bruno: “The timing went at the end but what a performance.”

Judges Scores: Len: “You are not a DWTS drop out, that was fantastic. Overall it was great and the icing on the cake was having Frankie Avalon here to sing.” Derek: “You are always so consistent, your frame is beautiful and your frame. There is something for me, this moment, I don’t know what it is that I want to give you a ten.” Bruno: “When it comes to beautify and legs you have nothing to spare, you stepped out of a dream.” Carrie Ann: “Grease is the word for you, you had technique, charm, musicality.”

Jusges Scores: Derek: “I am so confused, I loved it, you foot on his chest and shaking that skirt, so much fun.” Bruno: “We had the most fun ever, talk about throwing everything at it.” Carrie Ann: “I thought it was fantastic, you did a great job. I think some of your movements could be more aggressive. But it was fantastic.” Len: “You had elements of Charleston in there and you smiled the whole time.”

Judges Comments: Bruno: “Congratulations to the proud daddy. You very good in hold, dynamic side by side.” Carrie Ann: “You made us proud, the musicality and the storytelling. Sometimes when you are out of hold you are bigger than when you are in hold.” Len: “There is a flair about your dancing, the technique is not great, but you come out with enthusiasm.” Derek: “That had content, performance, story telling from beginning to end, the complete package.”

Judges Comments: Carrie Ann: “I am so happy that you are still here in this competition, you have incredible dignity, the way you came back it was like nothing happened.” Len: “It had chemistry, romance and control, it was spot on.” Derek: “That opening half spilt, stunning. It was assertive, intentional, you swam.” Bruno: “ That was brilliant, so focused, right on it honey.”

Popstar and dancer JoJo Siwa and pro Jenna Johnson dancing the Foxtrot to “Look At Me, I’m Sandra Dee (Reprise)”

Judges Comments: Len: “You affected my brain with the quality of the technique, you affected my heart with the technique. Superb!” Derek: “It was so beautiful, the opening turn was stellar, the style and grace was pristine, that was a moment.” Bruno: “That was the most exquisite interpretation of friendship. You were like artists.” Carrie Ann: “That was perfection.”

Judges Comments: Derek: “Confidence is not something you have, it something you did and you had it. That was fantastic, well done.” Bruno: “You had Gleb on his knees, it takes a lot of guts doing a quick step in lycra.” Carrie Ann: “I appreciate your vulnerability, when you just have fun you would do better.” Len: “It was your best dance or me.”

Judges Comments: Bruno: “it was uplifting, great performane. You really have to work on hold and footwork.” Carrie Ann: “I proud of you for getting through that after COVID.” Len: “You needed a stronger frame but I loved the energy you produced.” Derek: “Way to finish out the night I think your frame improved over last week.”

Time for some results. The two couples in the bottom two are Melanie C. and Gleb, Olivia and Val.