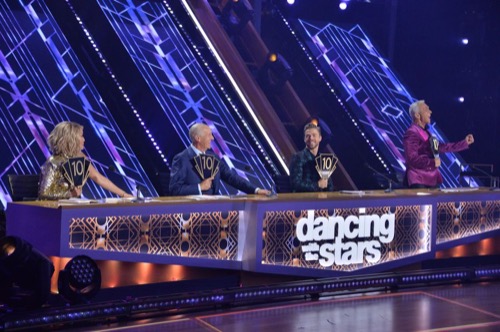 This week, the show will feature an opening number to “Nasty” by Janet Jackson, complete with a Tyra walkout. There will also be a special DWTS tour performance to “What Have You Done for Me Lately.”

Tonight’s DWTS episode begins with Tyra welcoming the six semi-finalists and announcing that they will be performing two routines to escape a double elimination and the mirror ball trophy in next week’s finale.

Judges Comments: Bruno: “The race to finale starts with a bang. You really got the energy and the excitement going, your hips were so much better, grounded but lighter. Good job, so much better.” Carrie Ann: “That is the definition of redemption. I am so happy to see you dancing at the performance level. You are totally getting into the movement, watch your feet though, sometimes the energy gets drained. Fantastic.” Len: “That was an action-packed full-on salsa. I loved the mix of stuff together, you are a little flat-footed, but that was a full-on salsa.” Derek: “That last little leg thing got me gasping, a few arm misses, but a huge improvement from the first time.”

TV and film actress Melora Hardin (“The Bold Type”) and pro-Artem Chigvintsev will perform a redemption Rumba to “I Don’t Want To Wait” by Paula Cole, coached by judge Len

Judges Comments: Len: “Mission accomplished. Tuity Fruity what a booty, that was working. I thought it was fantastic.” Derek: “The rumba seems easy, but there so much happened, it was refreshing to see a pure rumba, well done.” Bruno: “You got the right motion going through you from the foot, to the body to arms. It was so delicate, you interpretation is always telling, beautiful.” Carrie Ann: “Your hip action was greatly improved, we lost a little bit in the expression in your arms.”

Olympic gymnast Suni Lee and pro-Sasha Farber will perform a redemption Foxtrot to “Haven’t Met You Yet” by Michael Bublé, coached by judge Carrie Ann

Judges Comments: Carrie Ann: “In the last couple of weeks something magnificent is happening. That was full joy, full potential, full confidence, that is what I want to see.” Len: “Joyful, happy dance. Your frame was terrific when you were in the hold, I liked that very much. Your footwork was a tad suspect time and again but it was a terrific happy-go-lucky dance.” Derek: “I am loving Suni 2.0, seeing you blossom is so much fun. The frame was a little bouncy, other than that, be proud of yourself.” Bruno: “This girl can trot, you managed to do it with grace and your connection was wonderful.”

Judges Comments: Len: “That was bloody brilliant.” Derek: “It is actually quite common to see two males dancing Argentine tango together and its really cool to see full circle two women dancing Argentine tango together. It was so impressive, so clean, the articulation. It was beautiful, exquisite, and bloody brilliant routine.” Bruno: “You’ve blown all my fuses. Outstanding.” Carrie Ann: “You added so much passion, it was like you were an extension of one being.”

NBA basketball star Iman Shumpert (“We Got Love Teyana and Iman”) and pro Daniella Karagach will perform a redemption Tango to “Telephone” by Martynas, coached by Derek

Judges Comments: Derek: “You just debunked the myth that you can’t have a beautiful frame with the height difference. That was fantastic, you have come the furthest than any other NBA basketball player ever and there is a reason. You create these amazing moments, I am so proud of you, well done.” Bruno: “Smart, he looks the business and delivers the goods. Be careful, not to squat. But congrats.” Carrie Ann: “The frame was unbelievable to see you dance that way. You have so much magic when you dance, it was profound, love both of you.” Len: “What a vast improvement from week three when you did this, brilliant.”

Judges Comments: Len: “I asked you to get body content and I saw that throughout. Plus I saw the attack, I saw aggression, great movement across the floor, fabulous.” Derek: “Amanda you have been the most consistent dancer, well done.” Bruno: “Forget titanium, that was platinum. It was the clear-cut brilliance of a diamond. So brilliant, so slick.” Carrie Ann: “You danced that tango like the boss that you are, but your leg came off the ground.”

Judges Comments: Len: “I like the way the dance mirrored the music, the nuance, it was full of attack, full of purpose.” Derek: “Melora, we can always see and feel your love of dance, and thank you so much for that. You have truly been a powerful presence on this floor.” Bruno: “You have such a wonderful light motion, freedom. I love it, good job.” Carrie Ann: “You are just the most beautiful lyrical dancer. You dance from your heart and your soul and you left everything on the dance floor.”

Judges Comments: Derek: “That opening image was like everything, that was my favorite image of the whole season. Cheryl was working overtime in that routine. Great job.” Bruno: “If you like the Argentine tango red hot, they’ve got it. Well done.” Carrie Ann: “When you start off in that pose you better bring the drama in the dance which you did. There was something in the beginning, I applaud you, but I don’t know what happened.” Len: “In the first few weeks you got a six from me and you have come so far, brilliant.”

Judges Comments: Bruno: “Your lifts, your jumps, you were absolutely weightless. It is so good to see you being able to express yourself.” Carrie Ann: “Nobody gets a 10 for me unless there is something magical, I am so proud of you, I feel like your mom.” Len: “It was dramatic, it was passionate, you danced it with feeling. I loved the lifts, you are a lovely dancer.” Derek: “I love that you had an inward realization, you stopped seeking that outward validation, so proud of you.”

Popstar and dancer JoJo Siwa and pro Jenna Johnson perform their new dance, a Contemporary to “Before You Go (Piano Version)” by Lewis Capaldi

Judges Comments: Carrie Ann: “That was an amazing demonstration of all that you are. You are so powerful, you are both so complimentary, you were both in synch. So much emotion.” Len: “You mix artistry with athleticism and when I look at you, I got underpants older than you and you dance with such maturity, it was fantastic.” Derek: “I am in love with your grandma. That was the best contemporary dance we have ever seen on the show.” Bruno: “That was exquisite, perfect, there were moments when you sent me to dance heaven. You were angels out there, two hearts and souls united. It was stunning.”

Judges Comments: Len: “That had more lifts than Uber, they were spectacular. It was lyrical, a little staggering, our bodies are similar.” Derek: “It was so amazing, the beginning, the lifts, the choreography, very impressive. Really awesome.” Bruno: “I have already called a personal trainer because I am starting to have body envy. Thrilling, those lifts, heart-stopping, how did he do that. There was a tiny little stumble.” Carrie Ann: “You bring something different, you bring spectacular, artistic, and athletic, everything I want to see in a dance.”

Talk show co-host of “The Talk” Amanda Kloots and pro Alan Bersten perform their new dance, a Contemporary to “Live Your Life – Nick Cordero” by Lenii

Judges Comments: Derek: “There are moments when you do something for you and I am happy that you will always have this moment. Well done.” Bruno: “I was totally mesmerized, you touched my heart, I am sure you caught the hearts of the nation, this is beyond critique.” Carrie Ann: “Something happened halfway through the dance, you disappeared and went into this moment, it was beautiful.” Len: “You did two dances, each one different and both fantastic.”

Time for some results, in no particular order.

The first couple dancing in the finale is JoJo Siwa and pro Jenna Johnson, the next is Iman Shumpert and pro Daniella Karagach, and last is Cody Rigsby and pro Cheryl Burke

The couple with the lowest combined scores is Melora Hardin and pro Artem Chigvintsev, they are eliminated

It is up to the judges to decide which couple to save and add to the finals between Suni Lee and pro Sasha Farber, and Amanda Kloots and pro Alan Berst.