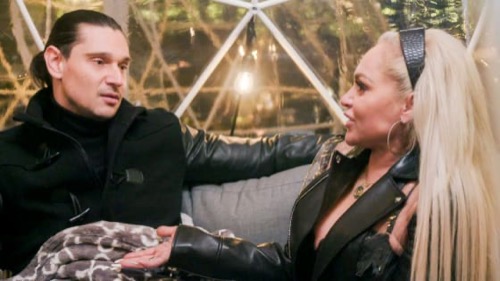 Tonight on TLC their new reality show Darcey & Stacey premieres with an all-new Monday, September 27, 2021 episode and we have your Darcey & Stacey recap below for you. On tonight’s Darcey & Stacey season 2 episode 11 called, “Over the Drama and Under the Knife,” as per the TLC synopsis, “Darcey struggles to move on from her relationship; Georgi confronts an enemy from his past; after lengthy and challenging surgeries, the twins return home to reveal their new looks.”

Darcey ended her engagement. She was tired of all the drama she experienced with Georgi and the last straw had been when she found out he contacted her ex-boyfriend. Everyone knew how Darcey felt about Jesse. Jesse was a liar and a manipulator. He hates Darcey just as much as she hates him. Darcey’s fiancé should never have crossed that line by speaking to Jesse and so Georgi went too far this time. He crossed a line. Darcey was tired of all the fights and the anger. She broke up with Georgi over a video call. She was ready to move on and that’s why she carried ahead with her surgery. Darcey and her twin sister Stacey were in Turkey to get plastic surgery. They wanted to change their nose, their breasts, and their waist size. The twins basically wanted to look unrecognizable to their past selves.

They later had a consultation with the plastic surgeon. They gave him a long list of what they wanted to change and he merely went “ok” to it all. The surgeon was well-known. The twins specifically went to Turkey in order for the doctor to perform surgery on them and the doctor liked them. He called them “fun”. The twins didn’t want to look realistic. They wanted to look like Barbie and the doctor was fine with accommodating them. The sisters also got a Turkish bubble bath. This is when they get physically scrubbed down by the women who work there and it was about purification of the body and soul. Darcey had loved the experience. She felt she had given so much of herself to Georgi and now she wants to get some of that back.

But back in the United States, the twins’ father was taking his granddaughters out for lunch. He also invited along with his ex-wife and so it was a family gathering. The family had drinks. They discussed the twins and their father Mike was worried about them. He thought they were having too many surgeries in a short time. He thinks they should go easy and they instead were going full-throttle. Darcey and Stacey were bullied as kids. They were short with curly hair and people made fun of them. They called them “chia pets”. Mike believes his daughters are beautiful. He always has and so he didn’t have the need for change while all they want to do is change. The twins were touching their faces with this new round of plastic surgery.

It was the first time they had ever touched their face. They usually settled for fillers and now that wasn’t enough. They went ahead with extensive surgery. They woke up later in their hospital beds and so far what they see is good. The twins were expecting to look more twin-like with all their surgeries. Darcey was contacted by Georgi while she was healing. She ignored the call and she was proving to be firm about ending things with him. It was Georgi who didn’t want to let go. Georgi wanted to figure out where he went wrong and so he contacted his ex-wife Octavia. They met up. They talked and Georgi tried to be nice. There was just one problem with that. He believes that it was Octavia’s lies that ultimately cost him his relationship with Darcey.

There was also a dispute about their divorce. Georgi believes it was final and at the same time, Octavia has never received official paperwork. She asked him if he had it on him. He did and he gave her a copy. Octavia asked him why he couldn’t email them to her. She doesn’t see why they had to meet in person. She called him dramatic and she also asked him to reel in his fiancé. She didn’t want Darcey calling her or asking her questions. Darcey’s questions reminded her how Georgi was emotionally abusive towards her and she told him that it was an unfortunate pattern of his. He treated her that way. He’s now treating Darcey that way. And so Octavia asked him about him and Darcey and he told her that they were okay.

Which did shock Octavia. She thought with Darcey being so involved in wanting to know about the divorce that it meant she was invested in her relationship with Georgi and it turns out Darcey left him. Darcey was over Georgi just as much as Octavia was. Octavia and Georgi parted ways. They didn’t end on good terms and they were never going to be friends, but they didn’t get nasty with each other and Georgi went back to focusing on him and less on how to win Darcey back. Darcey and Stacey meanwhile recovered from their surgeries just enough to fly back to the States. Florian met them at the airport. He was the first to see them after their transformation and it was hard to see under all the bandages. What he did see, he liked.

Darcey was happy to be back home. She still misses Georgi because she still loves him only she wasn’t going back to him. She was ready to be single for a while.