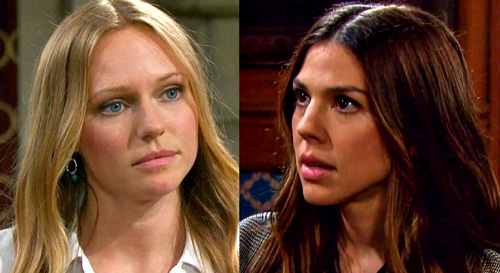 Days of Our Lives (DOOL) spoilers tease that Abigail DiMera will return, but will Marci Miller or Kate Mansi reprise the role this time around? DOOL fans know Abigail decided to take some time away from all the drama of Salem and her half-sister, Gwen Rizczech (Emily O’Brien). Abigail headed to Boston, where she’s currently spending some time with Jennifer Deveraux (last played by Cady McClain).

However, Abigail assured Chad DiMera (Billy Flynn) that she wouldn’t stay away too long for the sake of the children.

It’s not like Abigail can abandon Thomas DiMera (Cary Christopher) and Charlotte DiMera (Olivia and Oakley Rondou) indefinitely, so they have to bring this mom back into the picture sooner or later.

Of course, the reason for Abigail’s departure was due to Marci Miller’s maternity leave, but will this DOOL actress want to make a comeback? If Miller only signed on for a temporary stint, she might be content to have wrapped up her time on Days for a while.

There’s no guarantee that Miller will be the one playing Abigail when she ultimately returns to Salem. The show has been known to go back and forth between Miller and Kate Mansi, so Mansi might tag-team in as Abigail for her next run.

It works out well for Days to have two widely accepted versions of Abigail since they can just use whichever one is willing and available. Although there’s always a chance the show could go with a fresh face as Abigail, that doesn’t seem likely under the circumstances.

Between Mansi and Miller as possibilities, Days can surely figure out an Abigail comeback strategy that works! It’s worth mentioning that a new SOD blind item reveals “a very familiar face will pop up again” on one of the four main soaps, so that could be referring to Marci Miller or Kate Mansi.

It could also be an unrelated piece of news, but it’s something to keep in mind.

We’ll provide updates as other details emerge. Days of Our Lives spoilers say Abigail’s story is unfinished, so she’ll need to return at some point to see her children and figure out what the future holds with Chad.

CDL will have other exciting Days of Our Lives spoilers, news and updates to check out, so stop by often.