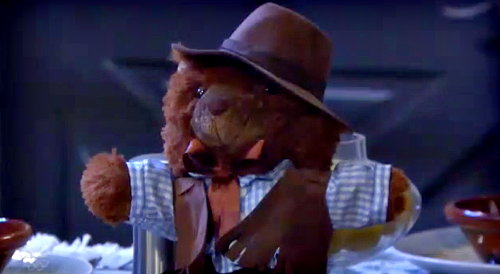 Days of Our Lives spoilers reveal that Duke the Bear started talking to Rafe Hernandez (Galen Gering). Frustrated from arguing about his love life, Rafe viciously attacked the stuffed animal. Perhaps this was a one-time only incident. However, the soap has dropped clues that this could happen again and with increased intensity. What’s wrong with Rafe and will he survive?

DOOL spoilers reveal that Rafe has been thinking about his relationship with Ava Vitali (Tamara Braun). At the same time, he also can’t get Nicole Walker Brady (Arianne Zucker) out of his head.

Duke the Bear actually began talking to Rafe. They argued and suddenly, Rafe screamed at the teddy bear and began shaking and strangling it.

When things like this happen in soaps, it is rarely from stress or a grown man’s imagination going into overdrive. We are probably going to see Rafe hallucinate again and it could get much worse.

It’s possible that Rafe could have a medical condition causing the vivid hallucinations. However, a more likely explanation is Rafe is being poisoned.

Days of Our Lives spoilers reveal that Rafe gave Eli Grant (Lamon Archey) the story of Duke the Bear. He went over sharing custody of the stuffed animal and admitted he had a dream of kissing Nicole. Eli had several things to say about Rafe’s situation.

First, Rafe is spending a lot of time staring at the bear, which indicates he’s thinking about the person who gave it to him. He also suggested that Ava might not appreciate Rafe sharing a private joke with another woman.

Just because she hasn’t said anything about it doesn’t mean it’s okay. Regarding dreaming of kissing Nicole, Eli said there will be problems with Ava.

Before Rafe, Ava was obsessed with Steve “Patch” Johnson (Stephen Nichols). She kidnapped Kayla Johnson (Mary Beth Evans) and forced Steve to be intimate with her.

People can change but it is a slow process. Maybe Ava tried to be mentally stable. However, jealousy is powerful.

First, Ava had to worry about her friend’s feelings. Then, Rafe dreamt about Nicole. What if Rafe said Nicole’s name while sleeping? She already had problems with Gabi Hernandez (Camila Banus).

With Gabi moving back in, there could be more conflict. Perhaps Ava is so possessive that she doesn’t want any female near Rafe, including his sister.

The evening of Rafe, Nicole and Ava’s dinner is when Duke the Bear spoke for the first time. Ava is always cooking for him and even delivers lunches to him at the police station.

Remember, Ava was drugged by Charlie Dale (Mike Manning) and the hallucinations were extremely vivid, just like with Rafe. Perhaps it is even the same drug.

Why did she strong-arm Nicole into having dinner with them that night? Probably because it was Rafe’s first dose of the poison. She needed a witness to verify that Rafe was talking to a stuffed animal before violently attacking it.

Ava probably doesn’t want to kill Rafe. Just wants to play hero when nursing him back to health. Each time Nicole comes around, she can give Rafe another dose of poison.

That way, it will seem as if Nicole is the reason he falls ill. It’s a sick, twisted story but it does sound like the real Ava Vitali. Do you think that Ava is poisoning Rafe and will Nicole be the one to save him?