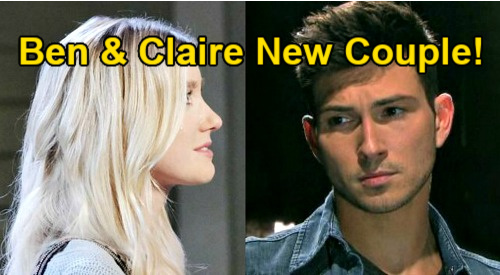 Days of Our Lives (DOOL) spoilers tease that Ben Weston (Robert Scott Wilson) and Claire Brady (Isabel Durant) could experience a major shift in their relationship.

DOOL viewers know Claire and Ben have formed a strong bond in recent months. After Ciara Brady Weston’s (Victoria Konefal) presumed death, Claire was there for Ben when he needed someone to rely on.

Since Claire missed Ciara as well, that gave her a reason to connect with Ben on a deeper level. Of course, Claire later listened to Ben’s suspicions about Ciara being alive and ultimately believed him.

Having Claire’s support meant the world to Ben – and she certainly did her part to help track Ciara down.

Ben also repeatedly came to Claire’s rescue when Charlie Dale (Mike Manning) posed a threat, so Days writers have given Ben and Ciara a solid friendship. Could that friendship become something more down the road?

It just might, especially now that Ciara’s amnesia has given Ben and Claire something else to bond over.

Ciara still thinks it’s 2018 in her own mind, which means she hates Claire over their past boy feuds – and she hates Ben for being a serial killer, too. Ben and Claire can relate to each other more than any other Salemites right now.

If Ciara leaves town without getting her memories back as expected, that’ll leave Ben distraught over losing his wife. Meanwhile, Claire will struggle over losing her best friend and all the progress she’d made with Ciara. It’ll be hard for Ben and Claire to cope, so they can lean on each other.

Will friendship finally cross over into romantic territory at that point? If Ciara wants a divorce, that could open the door to Ben’s freedom and give Claire an opportunity to make her move. It’s easy to imagine Claire and Ben falling into bed with each other as they seek comfort.

Days of Our Lives spoilers say Claire will want her next man to be someone she trusts. After the Charlie fiasco, Claire could be drawn to Ben as somebody familiar and a source of solace.

Plus, Claire has her own history of mental illness and doesn’t judge Ben for his past. It makes Claire the ideal person for Ben to move forward with.

Bottom line, Ben could easily drift toward Claire in the aftermath of Ciara’s departure, so DOOL fans will want to stay tuned! We’ll keep you in the loop as other Days news and updates emerge.

Do you think Ben and Claire will become a hot new couple?