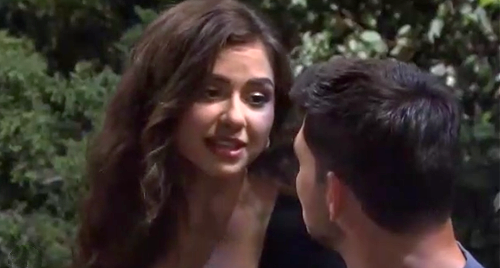 There are some good reasons to think it might since DOOL seems determined to repeat history and make “Cin” the new “Bope.” Like Bo, Ben kidnapped Ciara from her own wedding out of desperation.

Shawn Brady (Brandon Beemer) also gave Ciara and Ben the same book of poems that was part of Hope and Bo’s romance. He even bookmarked the one Bo read to Hope at their unofficial wedding in New Orleans, which is where Ben and Ciara have headed off on their honeymoon.

During the week of September 13-17, Ciara and Ben will make a stop at Oak Valley. That’s an old plantation that served as a significant spot in Bo and Hope’s romantic past together.

Shawn offered some interesting dialogue when he handed over that poem book as well. Ben admitted he was starting to feel a lot of pressure to live up to Bo and Hope’s love story, so let’s look at what Shawn had to say in response.

“Our parents’ love story is definitely an incredible one,” Shawn said in the August 31 episode. “It’s like yours and Ciara’s.” It doesn’t get much clearer than that!

Days flat-out told fans that Ciara and Ben’s love story is like Hope and Bo’s, but that may not be a good thing for the next portion of it.

Now that Ciara has brought up the idea of having a baby, it seems obvious a pregnancy chapter is coming up.

It’ll take some work to get Ben on board – especially since he’ll battle concerns about passing on sinister traits to their little one. However, Ciara should convince Ben eventually, so she may end up with a “Cin” bun in the oven.

Unfortunately, that doesn’t guarantee that Ciara and Ben’s first child will survive. Hope suffered a miscarriage and lost her own first child with Bo.

Considering all the connections Days has made to Bo and Hope’s love story, it’s reasonable to think Ciara might suffer a devastating miscarriage, too.

The good news is Bo and Hope went on to successfully have more children – and Ben and Ciara can do the same.

Nevertheless, a miscarriage could provide some gripping drama and serve as the next obstacle in Ciara and Ben’s life together. We’ll bring you updates as other DOOL details become available.

Days of Our Lives spoilers say Ben and Ciara will have to conquer more challenges, but they’ll just have to stick together and ride the waves!

CDL will have other hot Days of Our Lives spoilers, news and updates to read up on, so stick with us.