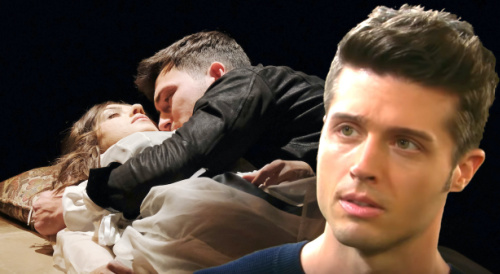 Days of Our Lives (DOOL) spoilers tease that Evan Frears aka Christian Maddox (Brock Kelly) will enjoy messing with Ciara Brady Weston’s (Victoria Konefal) mind and preying on her darkets fears. Evan will taunt Ciara over his upcoming plans and leave her terrified about what he’s got in store.

However, nothing could prepare Ciara for the news that Evan intends to murder Ben Weston (Robert Scott Wilson)! As far as Evan’s concerned, his troubles started when Ciara found out Evan was Jordan Ridgeway’s (Chrishell Stause) true killer and exposed it to stop Ben’s execution.

It’s easy to see why Evan would want to finish what was started at Statesville.

Plus, Days spoilers say Evan will know there’s no better way to make Ciara suffer than watching Ben croak. Nevertheless, Even will likely push his plan even further than just trying to kill Ben. Let’s think about DOOL’s recent emphasis on Ben and Ciara as Romeo and Juliet.

Ben and Ciara were rattled after they both died in that shared dream. It led them to focus on the need to stay alive and find their way back to their bright future together. As angry as Evan is right now, it’s easy to imagine him deciding Ciara should die right along with Ben.

Perhaps Evan’s full plan will be for Ciara to watch Ben’s murder before Evan kills Ciara, too. Evan already admitted he felt satisfied when he thought Ciara was dead, so he may determine that only Ciara’s death will fulfill that satisfaction again.

Days of Our Lives spoilers say Evan will want to lure Ben into a trap, which will be a piece of cake considering Ben would do anything to find Ciara. All Evan has to do is tell Ben where Ciara is – and warn him to come alone or she’s a dead woman. Once Ben arrives, Evan can easily take a second hostage.

Ben and Ciara may wind up fearing they’ll both die before this horrific night’s over – just like they did in their dream as Romeo and Juliet. This could bring some powerful, emotional moments as Ciara and Ben worry this is the end of the road.

Of course, that’d be the perfect time for someone like Shawn Brady (Brandon Beemer) to burst in and save his sister along with Ben. Even Claire Brady (Isabel Durant) might get in on the action depending on how all this plays out.

Whatever the case, Days of Our Lives spoilers say Evan’s revenge is about to heat up. We’ll provide updates as other Days info emerges. DOOL fans won’t want to miss what’s ahead for Ben and Ciara, so stay tuned for more drama!

CDL will have lots of other great Days of Our Lives spoilers, updates and news, so stop by frequently.