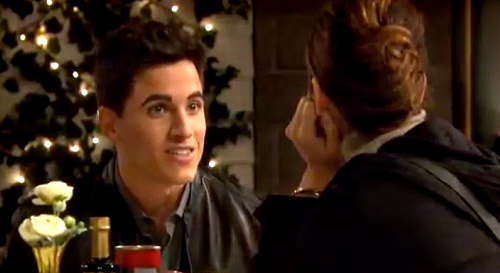 Days of Our Lives (DOOL) spoilers recap for Friday, February 19, reveal that Abigail DiMera (Marci Miller) apologized to Gabi DiMera (Camila Banus). Abigail said that she was sorry for accusing Gabi of drugging her, and that the person responsible for nearly sending Gabi to prison was Gwen Rizczech (Emily O’Brien).

Gabi learned the whole story of Gwen’s revenge plot and how Gwen was Jack Deveraux’s (Matthew Ashford) long-lost daughter. Abigail asked Gabi to help her get revenge on Gwen, but Gwen balked, saying that she had too much on her plate. Abigail eventually got Gabi to think about it, with no promises made.

Gwen needled Charlie about being a rapist, and he flatly denied it. Gwen didn’t buy it, and Charlie went on about how he was the victim and had lost his soulmate.

Charlie didn’t name Claire Brady (Isabel Durant) by name, but after hearing all of Charlie’s sob story, Gwen said that there’s no way that the girl Charlie was in love with would want to be anywhere near him.

Charlie got miffed with Gwen’s attitude, and he left. Soon, Gabi came along and bickered with Gwen, accusing Gwen of nearly sending her to jail. Gwen denied it.

At the Brady house, Claire and Belle Black (Martha Madison) talked at length about how Ciara Weston (Victoria Konefal) had been “reaching out” to Ben Weston (Robert Scott Wilson) and had even called him. Belle didn’t want Claire to get her hopes up about Ciara being alive.

Soon, talk turned to Charlie, and Claire revealed that Charlie had grabbed her in the park earlier. As they talked, Claire realized that Charlie could skate on the kidnapping charges against him and go free for both that and the rape.

Belle said that they really needed a confession from Charlie to send him to prison.

At Allan Rhodes (Jason Downs) last known address, Shawn Brady (Brandon Beemer) and Ben rushed in but no one was in the apartment. Shawn talked to a neighbour who said that Rhodes hadn’t been around since last September – right when Ciara went missing.

Ben was upset that they couldn’t find anything of use in the apartment.

Ben and Shawn headed back to the Salem PD where they talked in the squad room and looked through Rhodes’ stuff from his storage room. Shawn wasn’t entirely convinced that Ciara was alive, but Ben insisted that he just “knew” that Ciara was out there and that she had called him.

Shawn thought they needed to prepare for the possibility that Rhodes didn’t have Ciara.

Later, Belle arrived in the squad room and talked to Shawn. Shawn shared that Vincent Belman (Michael Teh) had committed suicide in his jail cell, and that they were on the hunt for Rhodes, who may have Ciara.

Meanwhile, back at Ben’s apartment, Ben wondered what he wasn’t seeing in the evidence, and he vowed never to give up on Ciara.

Where Ciara is being held, Rhodes fell to the ground dead after being shot…by Evan Frears aka Christian Maddox (Brock Kelly).

Ciara stood stunned, and asked what Evan was doing there. “It’s not to let you go, I can tell you that,” Evan said menacingly. Ciara asked why Evan shot Rhodes, and why he wasn’t in prison.

Evan rehashed for Ciara how he had a mental breakdown in prison and was transferred to Bayview, then left the facility after double-crossing his dad Orpheus (George DelHoyo). Evan said that his father then informed him that Ciara was alive, which he heard from Vincent.

“My dad gave me a golden opportunity to pay you back for destroying my life,” Evan told Ciara, saying that he was very angry at her for ruining his life.

Ciara fired back that his life was ruined because he killed Jordan Ridgeway (Chrishell Stause). Evan continued, saying that he and his father had plans for Ciara.

Finally, at Charlie’s apartment, Charlie ranted to himself about wanting to find a way to get Claire alone. Suddenly, Charlie’s phone rang, and it was Claire, who told Charlie that she’d like to get together.

That was a great episode of Days of Our Lives, and there’s plenty more coming next week, so stick with the NBC soap! Here at CDL, we’ll keep you updated with all the latest Days of Our Lives spoiler, news, and daily episode recaps.