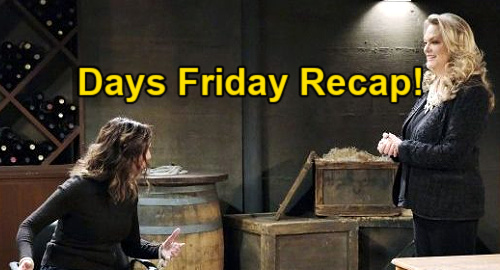 Days of Our Lives (DOOL) spoilers recap for Friday, March 5, reveal that Gwen Rizczech (Emily O’Brien) woke up in the DiMera tunnels and angrily realized that Gabi DiMera (Camila Banus) betrayed her.

Up in the DiMera living room, Chad DiMera (Billy Flynn) interrupted Abigail DiMera (Marci Miller) as she was about to check on Gwen. Chad wanted Abigail to attend marriage counseling this afternoon, but Abigail insisted that she had something else to do.

Abigail headed down to the tunnels, where she bickered with Gwen and announced that Gwen was staying put until she admitted to all her crimes on tape.

Gwen needled Abigail about her kids and about Chad, saying awful things to Abigail, but Abigail remained firm and insisted that Gwen would indeed confess – she just needed the proper motivation.

Later, Chad and Anna DiMera (Leann Hunley) talked in the living room, and Anna gushed about how she was planning a champagne lunch with Tony DiMera (Thaao Penghlis). Anna advised Chad to give Abigail some space and time, and then Anna headed down to the wine cellar in the tunnels.

In town square, Philip Kiriakis (Jay Kenneth Johnson) and Gabi were stunned to find a stop construction order on the GabiChic storefront.

Jake DiMera (Brandon Barash) and Kate DiMera (Lauren Koslow) came along and revealed that they offered the landlord more money for the store space, and it was to be a Basic Black boutique. Gabi and Philip were appalled.

Philip and Kate walked over to the Brady Pub, where they bickered about Kate’s move and about her working at DiMera Enterprises with Jake.

Philip opined that Jake would eventually dump Kate for Gabi, and he argued that Gabi and Jake would be at each other’s throats now…which could turn amorous.

Back in town square, Gabi and Jake argued over Jake’s business and personal relationships with Kate.

abi thought that Kate would eventually steal DiMera Enterprises from Jake. Jake balked at this, and as they were arguing, Abigail came along and said that she needed to talk with Gabi right now.

Abigail and Gabi went to the park, where Abigail said that she needed Gabi’s help in tracking down Wilhelm Rolf’s (William Utay) drug stash.

Abigail explained that she wanted to threaten Gwen with the dangerous hallucinogen so she would talk. Gabi agreed, and then Chad came along and caught Abigail and Gabi together.

Back in town square, Jake and Kate regrouped, and Jake mentioned that Gabi had run off to talk privately with Abigail. Kate thought that was weird. And back in the DiMera tunnels, Anna opened the door to the wine cellar to find Gwen tied up. Gwen and Anna stared at each other blankly.

In the room where Ciara Weston (Victoria Konefal) is being held, Ciara told Evan Frears aka Christian Maddox (Brock Kelly) about her shared dream with Ben Weston (Robert Scott Wilson), and she gloated that Ben would come rescue her.

Eventually, Evan admitted that Ben was alive, but that he was soon going to kill Ben.

Ciara begged Evan not to kill Ben, but Evan mused about how he’d kill Ben and about how he was going to set the universe right since Ben was supposed to die of a lethal injection last year.

Ciara told Evan frantically that he should just run away and go be with his son David Ridgeway (Kyler Ends). Evan balked, saying he was going to go kill Ben now. Ciara was horrified.

At Statesville Prison, Ben visited Clyde Weston (James Read), and Clyde told Ben that Ciara was alive. Clyde rehashed how he talked with Orpheus (George delHoyo) and how he shanked Orpheus to get his phone.

Clyde handed Ben Orpheus’ phone and said that when he called the last number dialed, Evan had answered and bragged about having Ciara captive.

Ben reeled, realizing that Evan must have killed Allan Rhodes (Jason Downs). “Use the phone to find Evan,” Clyde urged, telling Ben to take the phone to the cops so they could trace it. Ben left hurriedly, thanking his father as he did.

There’s definitely a lot going on right now on Days of Our Lives, so stay tuned! We’ll give you updates as DOOL news comes in throughout the weekend. Stick with CDL for all the latest Days of Our Lives spoilers, daily episode recaps, and news.