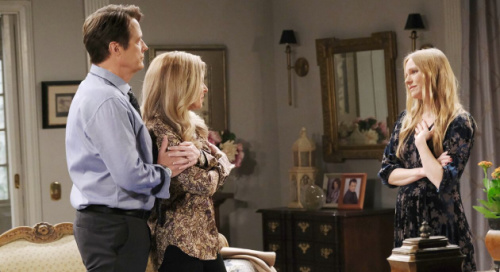 Days of Our Lives (DOOL) spoilers tease that Jack Deveraux (Matthew Ashford) made a chilling promise recently. As DOOL viewers will remember, Gwen Rizczech (Emily O’Brien) recently found Jack sitting in the DiMera living room going through the newspaper clippings that she had collected about the Deveraux family. An argument ensued, and Jack warned Gwen to leave his family alone.

“You don’t want me as an enemy,” Jack fumed, and he looked like he really meant business. Well, when Jack finds out Gwen’s latest stunt – bedding a very drunk and deceived Chad DiMera (Billy Flynn) in order to turn Abigail Deveraux’s (Marci Miller) life upside down – he’s probably going to be livid with Gwen.

Of course, Jack’s not going to be happy with Chad, either, but something tells us that Jack might have some empathy for what Chad went through after Gwen led him to believe that Abigail was having an affair with Jake DiMera (Brandon Barash).

Jack’s been down the infidelity road recently, and he’ll probably realize that while Chad made a mistake, Gwen set the whole thing in motion.

We’d love to see Jack go dark and really go after Gwen in retaliation for what she did to Abigail and Chad’s marriage. Jack just might – after all he did warn Gwen not to take him on. Jack has a pretty ruthless past, and he can be a big meanie when he wants to be. It would be great to see Jack totally unleash his fury on Gwen.

The whole thing would be pretty ironic if Days buzz is true and Gwen turns out to be Jack’s long- lost daughter whom he fathered during his time away from Salem.

In fact, this seems to be Gwen’s big plan – ruin the Deveraux family’s relationships and cause havoc, then reveal her big secret to get revenge on daddy dearest and blame him for the whole thing.

Well, if “Ruthless Jack” comes out, it might not even matter that Gwen’s his daughter in the end. Days of Our Lives spoilers indicate that Gwen will eventually tell a shocking tale to Jack and Jennifer Deveraux (Cady McClain), which could be that she’s his daughter – but even then, Jack might still fight back.

It will be interesting to see what happens here, but we’d enjoy seeing Jack really pull out all the stops to bring Gwen down. Surely Gwen has to have an Achilles’ heel of some sort – maybe Jack could find it and make her suffer!

Do you think that Jack will ultimately be the one to give Gwen her comeuppance? Stay tuned to the NBC soap and we’ll keep you informed with all the latest Days of Our Lives spoilers, news, and daily episode recaps.